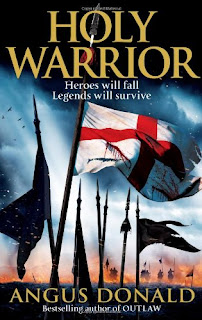 A week of working away in Dublin has meant no painting (though next week's trip to Belfast has been cancelled freeing up the bulk of the week), however it did give me time to read the sequel to Outlaw by Angus Donald, Holy Warrior.

Holy Warrior sees the Earl of Locksley (aka Robin Hood) and his (not so merry) men journey to the Holy Land with Richard I as part of the Third Crusade (indeed most of the book covers the journey, but that was more interesting - and bloody - than I expected).

Like it's predecessor it does not hold back on the violence and this does make it hard to like some of the characters who instinctively you feel you should root for (Robin is much more Tony Soprano than Errol Flynn) as they do some ambiguous things.

Donald doesn't shirk from including some of the worst excesses of religious violence in the book, both the Massacre of the Jews in York and Richard I's slaughter of the Muslim prisoners in Acre are included and it does make for very dark reading. The main battles covered in the book are the sack of Messina, the storming of Limassol (both ironically against Christian opponents) and the battle of Arsuf.

Overall it was quite a good read, although some of the actions of the "heroes" make them impossible to like. Gaming wise I am still tempted to try some outlaw skirmishing one day and did consider digging out the old Airfix Robin Hood set I have in the attic somewhere before I remembered this was supposed to be Air Month! :-)
Posted by Steve at 11:09:00