I must confess 'WWII Month' is not going great guns. I'm hoping I'll have finished one Soviet platoon plus some support units by the end of the month but I haven't made the progress I was hoping. Whilst the dedicated months are good for focus I think my ambitions as to what I can produce on a month with the demands of real life work, family etc are too high. Still there is an element of aim for the stars, touch the moon, as I think I have been more productive on finishing larger units than previously (the previous WWII project saw just one section of Germans painted in a ten week period), so for the time being I will persevere with the idea. 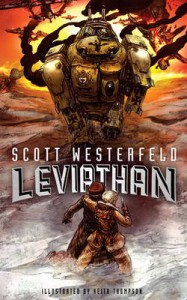 On a different note Saul suggested I read Scott Westerfeld's Leviathan, a young adult steampunk book set at the start of an alternate WWI. I must confess to being a fan of young adult SF and fantasy as the ideas seem much more original. In Leviathan we follow two main characters Prince Alexandsr of the Austro-Hungarian Empire and Deryn Sharp, a girl disguised as a boy serving in the Royal Naval Air Service.

The most interesting element of the book is whilst the Central Powers are "Clankers", supporters of industrial tech with steam walkers and zeppelins, whilst the Allies are "Darwinists" who have developed weapons from evolving living animals into tools This means that the British Leviathan airship is a genetically modified flying whale and the Royal Naval uses modified Kraken-class squid!

It does sound a bit weird and I was a tad sceptical when  Saul suggested the book, but it does make sense in the context of the story and adds a lot to it. I must confess that by the end my mind was racing with gaming possibilities and I quickly sent off to Amazon for a copy of the sequel Behemoth which starts in the Ottoman Empire.

Definitely one for both Dad's and sons to enjoy, and the cleverer kind of daughters who like toy soldiers... :-)