The success of Bernard Cornwell's Sharpe novels has led to many imitators and whilst not many reach the same level, they give it a fair crack. Iain Gale's Jack Steel series is one of those. Set during the Malburian Wars (or War of Spanish Succession if we are going to be technically correct), the books do help remind us of the impressive victories of John Churchill, the Duke of Marlborough against the French. 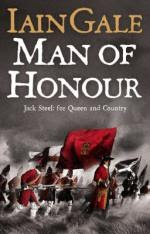 Man of Honour is the first in the series and is set around the Battle of Blenheim (1704). Lieutenant Steel is tasked with recovering a letter the contents of which could be used to claim that Marlborough has Jacobite tendencies (the period is interesting in that the Stuart claim to the throne is still alive and Scots and Irish fight against Marlborough), before returning to fight prominently in the battle. Very enjoyable, the book may not be as good as the early Sharpe novels but it is an excellent read and worth checking out if you fancy a change of period on the historical fiction front. 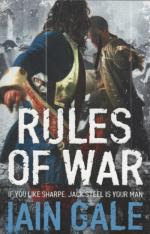 The second in the series is Rules of War starts at the Battle of Ramillies (1706) with Steel leading his Grenadier company to glory in the battle against the French in some very well written hard fought action. After this, in typical Sharpe style, he is sent on a mission to Ostend before leading his troops in the storming of the port with its near impregnable Vauban fortifications. Again a good mix of black powder battle and espionage, coloured with the political fighting between Whigs and Tories. Another enjoyable read. 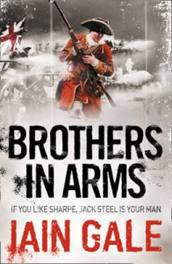 The third (and currently last) book in the series is Brothers in Arms starting at the Battle of Oudenarde (1708 - following the 1707 Act of Union) which sees the newly promoted Captain Steel in the thick of the action before engaging on a mission of vital importance to Marlborough in the heart of the enemy realm - Paris. Unfortunately the book is a pot purri, starting well before becoming very fractured. Fascinating actions at Wynendael and Leffinghe don't get the attention they deserve and a couple of characters are killed without a seconds thought. From the dedication at the front of the book it is clear that the author sadly lost his wife during the writing and this most likely explains the way the book somewhat drops off. Despite this it is certainly worth reading and will encourage further investigation of two lesser know battles.
Whether Gale will add to the Steel series is not clear. He has subsequently written Alamein (which I'm currently reading), a standalone novel of the battle similar to his excellent Four Days in June about Waterloo and has started a new WW2 series which is published next year. With Malplaquet, the bloodiest battle of the war next (and the release of the Wargames Factory War of Spanish Succession plastics!), we can only hope so...
Posted by Steve at 16:37:00