As promised the first of my small 15mm Danish force for Seven Days to the River Rhine. Why Danes? Well, first off they are definitely the underdog in any clash with Warsaw Pact forces which is a good excuse when I lose(!) but also they have some cool obsolete (although upgraded) equipment like Centurions and M41 Walker Bulldogs which makes a fun change from ubiquitous Leopards etc (though the Danes did have some Leopards so if they are too easy to defeat...) 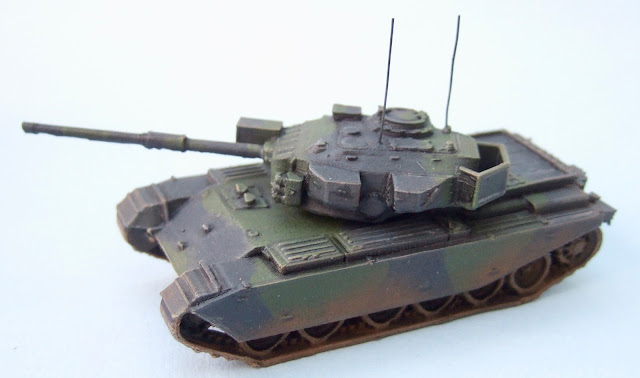 The first models I have completed are troop of Centurion Mk 5/2 DK's purchased from Butlers' Printed Models.  I was a little concerned about the possibility of 3D printing striation (some of the models on the BPM website show it being quite pronounced) but after painting where there was some it is not really noticeable (I think the key is not to drybrush over any areas of it).

To assist with the painting I picked up a copy of Colours of War which is not only an excellent reference guide for AFV colours and uniforms, but is chock full of step by step painting guides for various camo patterns which can differ depending on the type of pattern you are painting (so not just repeating the same technique). Well worth getting hold of a copy in my opinion.