Another eighteen infantry painted for Rebels and Patriots, though 2/3 of them saw their first action in a game of Sharp Practice earlier this week. From a Rebels and Patriots perspective they will be classed a Light Infantry, in a few test games we've played neither George or I felt that the Skirmish classification rules worked in a suitable fashion for the C18th and the one time we had a Sharpshooter unit on the table it was like facing an MG42! :-) 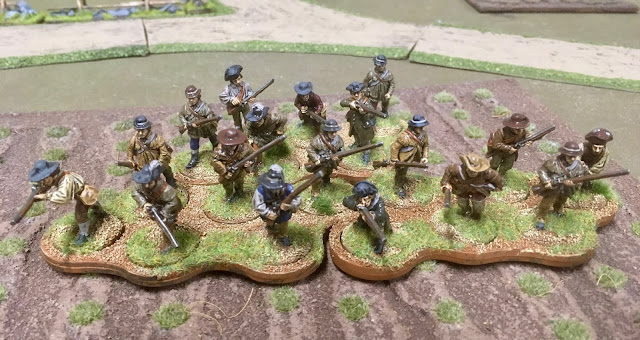 As to what unit at Guildford Courthouse these guys are I'm not 100% sure. Initially the idea was to have some units of Virginian Rifle Corp Skirmishers but I need to have a think about it, perhaps they could be split into Light Infantry small units. Something to ponder...

As previous the figures are a mix of Perry plastics and metals and some Foundry metals, block painted and dipped...
Posted by Steve at 21:29:00