Having painted three units of Militia for Rebels and Patriots, I decided to concentrate on a second Continental Army unit to go with the 1st Maryland which I painted back in the July - the 2nd Maryland! 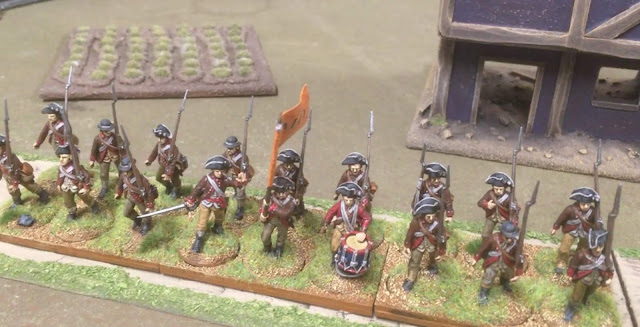 By 1781 Continental Army units were supposed to wear blue coats (and when I get around to the Virginia regiments they will be in blue like the 1st Maryland), but following the destruction of Gates' army at Camden in 1780 the remnants of the seven Maryland line regiments which fought there were reconstituted, just before Guildford Courthouse, as the 1st Maryland Regiment and a new 2nd Maryland Regiment was raised, unusually for the time in brown coats (and unlike their namesakes from a year earlier at Camden who wore blue!). 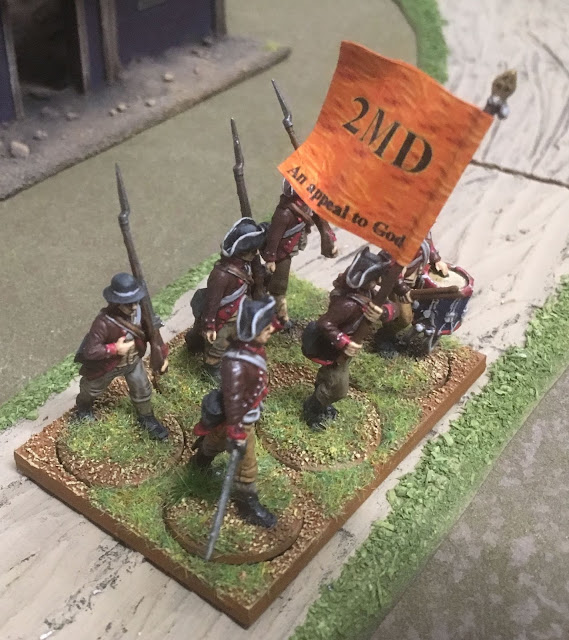 I have read that the drummer should be painted in a blue coat with red facings but I am not 100% sure of that so went with the traditional reversed colours...

As previously I have block painted then dipped the figures in Army Painter Strong Tone dip, picking out the "white" straps in pale grey and adding some flesh highlights afterwards. It's not the neatest look, but suits my idea of troops on campaign in the field in the spring of 1781. The miniatures are all Perry plastics with a couple of Foundry metals and the flag is again is from Maverick Models.
Posted by Steve at 21:04:00