The Men Who Would Be Kings: Play Up! And Play The Game!

Having been in France earlier in the week, my regular excursion into the Sudan with George was pushed back to last night. We decided to try the Seek and Destroy mission we played back in August again with the British tasked with destroying a Mahdist village in 12 turns, this time we would use 36 point Field Forces and I had a cannon! :-) 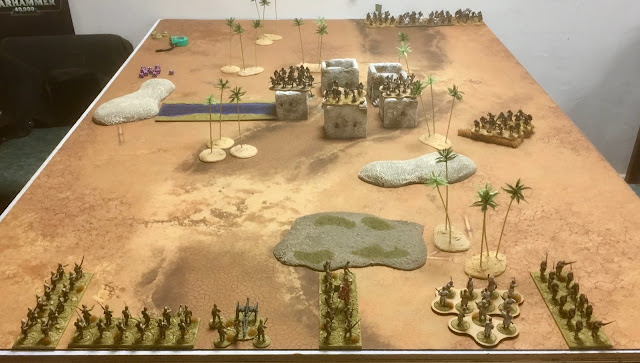 The game started with my Field Force deployed to attack the lightly defended village with George's stabby spear armed guys rushing up to reinforce the village.

My artillery opened up causing 3 points of damage to the first building, whilst the 92nd Highlanders 66th Foot and 15th Sikhs all advanced towards the village.  The Bazingers (out of shot to the left) decided to ignore orders to advance! 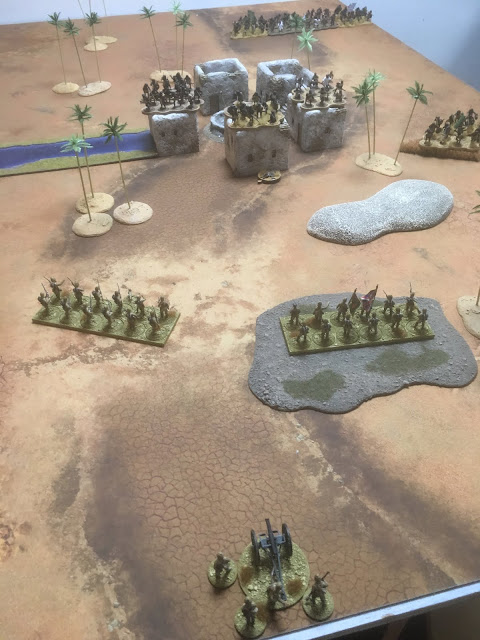 On turn two my cannon failed their order to fire which was frustrating, as was the failed command rolls attempting to get the 1/66th and 15th Sikhs into Close Order. The Bazingers again refused to advance! 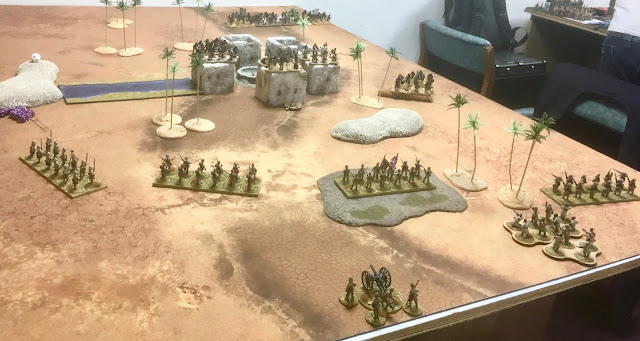 To add insult to injury George's Irregular Infantry rifles in the village fired at long range at the 1/66th and killed one of the brave Englishmen...

Next turn the 2/66th opened up on the Irregulars inflicting several casualties and Pinning them, the 92nd opened fire on the Beja in the neighbouring building killing one, the Bazingers moved forward(!) and the cannon fired causing a further 5 points of damage to the enemy building. The 15th Sikhs again refused to form Close Order! 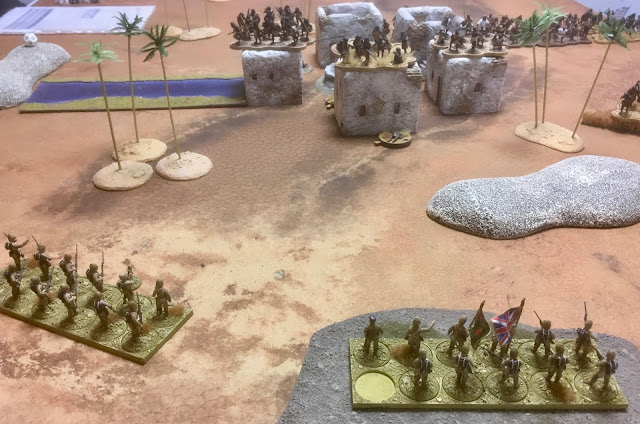 Another turn and the artillery brought down the first building, destroying the unit of Irregulars within.  The 1/66th then formed Close Order and the 2/66th and 92nd concentrated their fire on the Beja in the second building, Pinning them and subsequently seeing them Retreat after a failed Rally roll.

At this stage I was feeling reasonably confident, although once again the 15th Sikhs refused the form Close Order which with half the Mahdist army advancing on them was somewhat concerning... 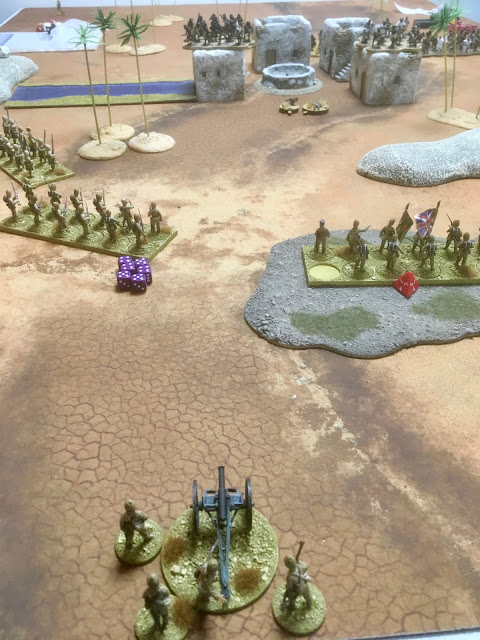 With his reinforcements advancing swiftly up the table, George decided to launch one of his Beja units who had been hiding in some rough terrain at the Sikhs. Unfortunately his dice roll didn't go his way and they ended up short of their target and next turn came under fire from the 15th Sikhs, 1/66th and Bazingers, killing 11 and pinning them. 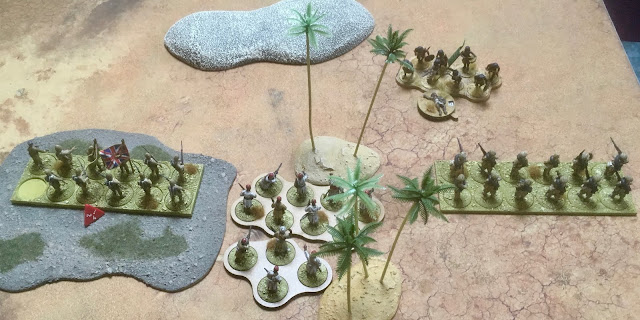 However the respite for the Sikhs was short as the main block of Beja rushed into contact! A fierce and bloody melee ensued and the noble Fierce Sikhs fought off the attacking stabby spear armed natives but lost five men doing so.

Elsewhere the cannon kept chipping away at building number two though the 92nd Highlanders now decided that they wanted a rest and refused orders to advance on the village (my calling them Jacobite sympathisers at this stage may not have helped!) 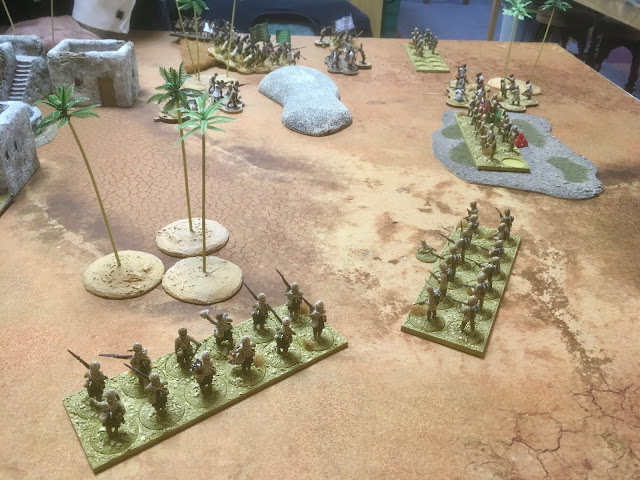 Again the Sikhs came under attack and despite once again proving quite vicious with the bayonet, the odds were heavily stacked against them and they were wiped out... 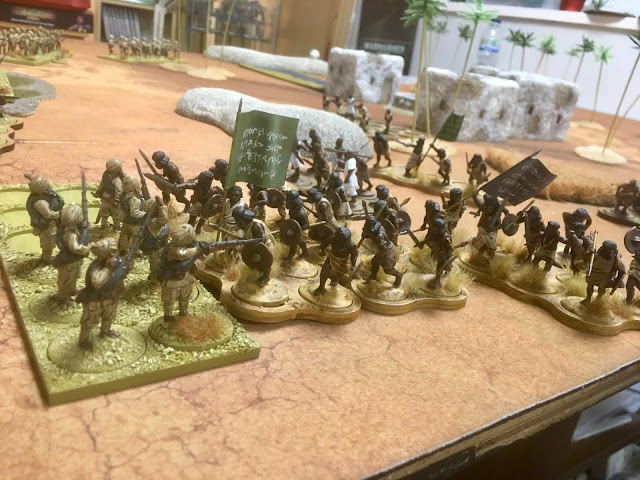 Next turn though the 1/66th and Bazingers gained a measure of revenge mauling two units of Beja and River Arab Tribal Infantry (after the initial problems of getting them to move, the Bazingers proved surprisingly valuable as riflemen, inflicting a lot of casualties on the Mahdists though the game).

Elsewhere the cannon took down building two and the 2/66th pinned the remaining Irregular Infantry who had tried to skirmish out of cover towards the hill that was blocking them shooting at the Bazingers. 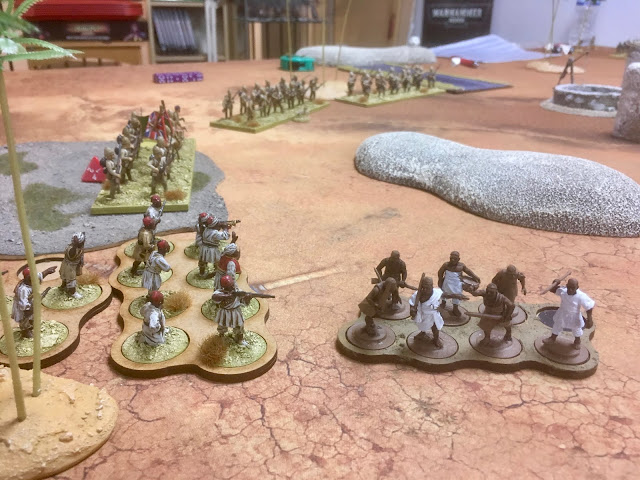 With my brave lads punching holes in the Mahdists and George having some abysmal dice rolls (the Pinned Beja in the village rolled 2 on a Rally roll and routed) I had what can only be described as a "blonde moment" (I put it down to jet lag) and did something that turned the game (not that I noticed at the time!) - I advanced the 2/66th!

The brave Bazingers then beat off an attack by the remnants of one of the Beja units... 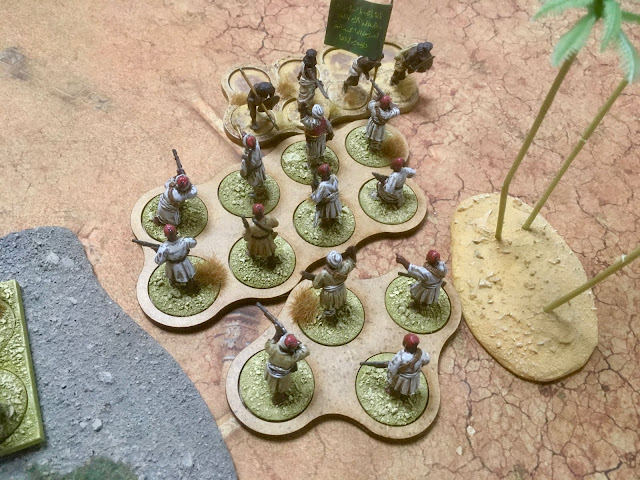 My mistake in advancing the 2/66th to pursue the enemy rifles was that it took them across the line of fire of the cannon, meaning that for the final three turns of the game it could not attempt to fire at the remaining buildings in the village.

This would not have been an issue if the 92nd had not once again refused to advance. If they had, they would have been able to smash down a building or two with 12 dice hitting on 4, 5 or 5 and needing to cause 10 points of damage... 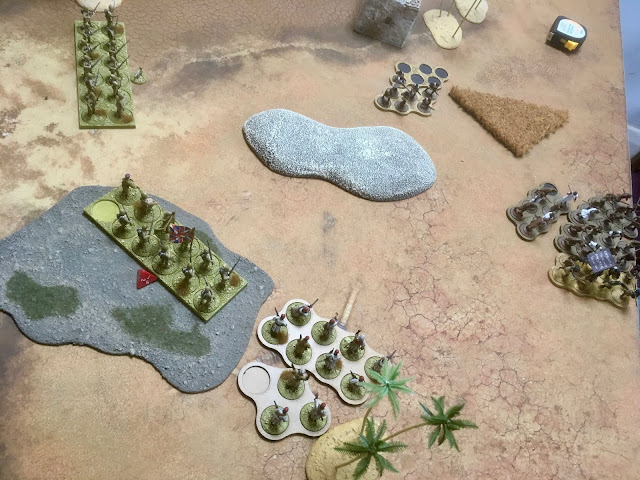 As we entered the final turn this was the position. Almost all the Mahdists had been wiped out and part from the Sikhs and a few Bazingers, British casualties were remarkably light. Even the Highlanders had started to advance... 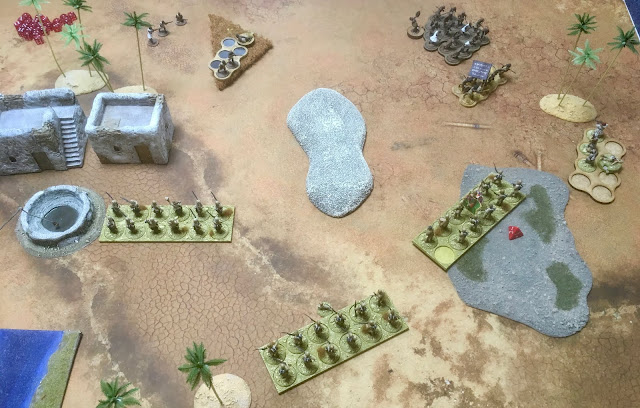 Once again I had lost track of the victory conditions, all the more frustrating as I had victory in my grasp and threw it away.

I had destroyed two buildings at 3 VP a pieces, George had three buildings remaining at 2 VP a piece AND he had destroyed a unit of mine giving him an additional 2 VP and handing him victory (I gained no VP for destroying his units in this game as my focus was supposed to be razing the village).

A fun game and by and large I think my tactics would have worked and if not for the school boy error in advancing the 2/66th when I need not have bothered, I probably would have destroyed at least one more building securing victory for Her Majesty. Ho hum!

When setting up the game we decided to try the terrain deployment rules from Principles of War and these worked quite well, the rough ground slowing the advance of the 1/66th and the hill blocking line of site impacting both side. Incidentally the blue river represents a wadi as we couldn't find something more suitable last night, and making some suitable terrain for wadis etc is now high on the 'To Do" list!