The Men Who Would Be Kings: Go To Your Gawd Like a Soldier...

Due to prior commitments George and I scheduled a Tuesday night game of The Men Who Would Be Kings at BIG and I suggested we play the Get Off My Land scenario in which the British have to temporarily occupy six sites on table. As we were playing with 36 point forces we increased the number of sites to eight.

I had read on the The Men Who Would Be Kings Forum that this was a hard battle to win and so it proved...

Initial set-up was as below, the British entering from one table edge and the Mahdists deploying any non-Tribal units, in this case George's two units of Irregular Infantry (the dreaded "snipers"). 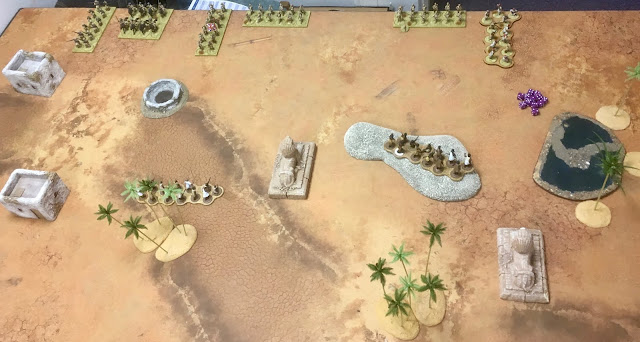 My cunning plan was to have two units of Regulars fire at the Mahdist riflemen, Pin them and have the remaining units move swiftly on the objectives. Unfortunately my bad dice rolling returned and I only killed two natives in each unit and failed to Pin either. 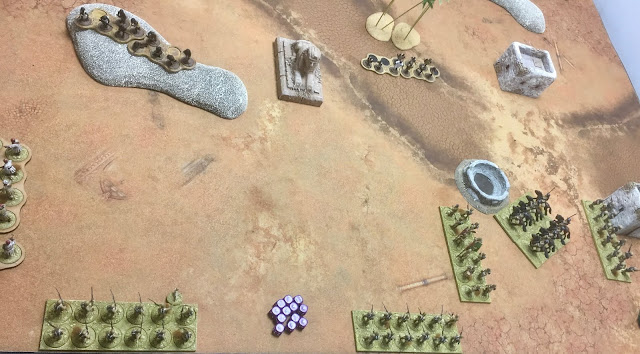 They returned fire killing two Bazingers and a Bengal Lancer. Both these units survived a Pin test.

Turn two saw George deploy his hidden Beja Tribal units. In the scenario they could appear in pre-noted areas of the table but not within a speed value of an enemy unit (for Tribal Infantry this is eight inches). 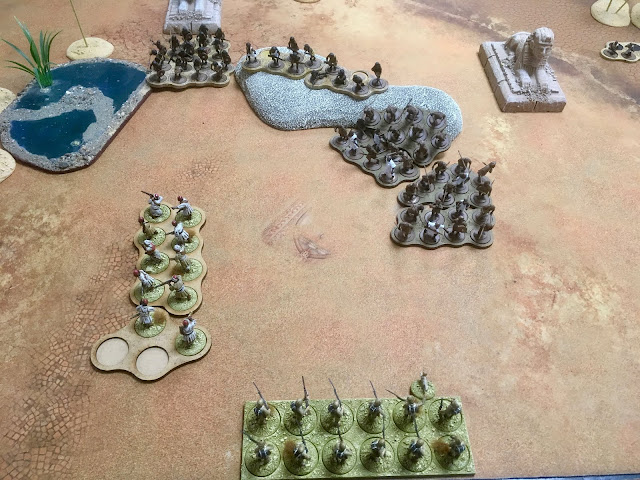 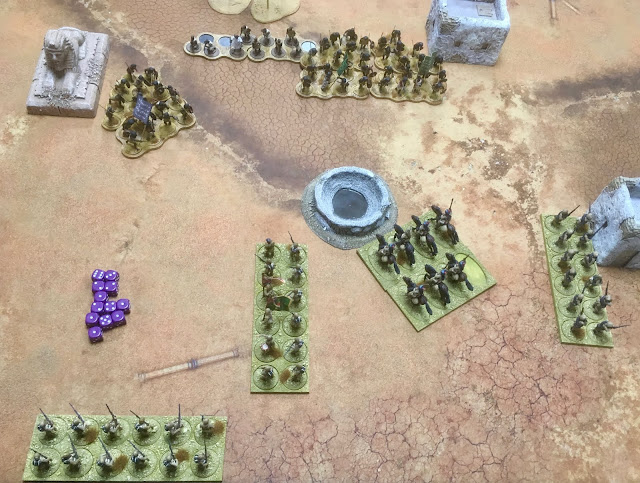 For the first turn of their arrival the Tribal Infantry could not take any addition actions so I had the chance to riddle them with rifle fire and hopefully Pin them.

All my units opened fire on the Beja with very limited effectiveness. One Regular Infantry unit looking for 5's or 6's for kills rolled six 1's three 2's, one 3 and just two 5's! 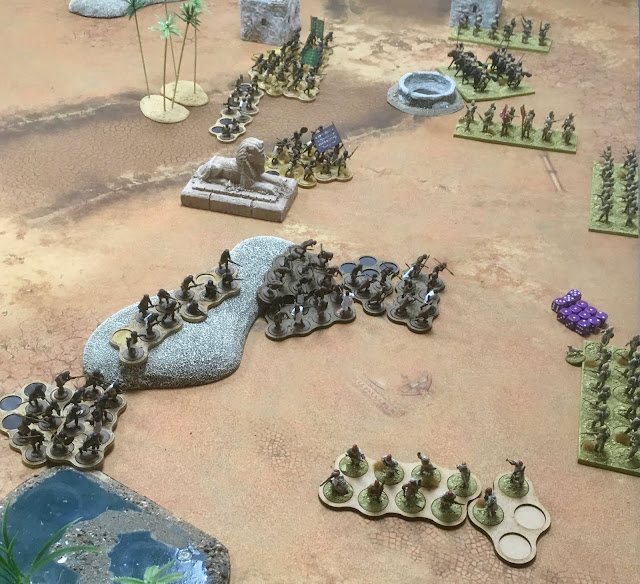 Out of the six Beja units (all of whom were within potential Charge range next turn) I only managed to Pin one.

The next turn George's Beja charged in forcing one unit of Regular infantry to retreat off the table... 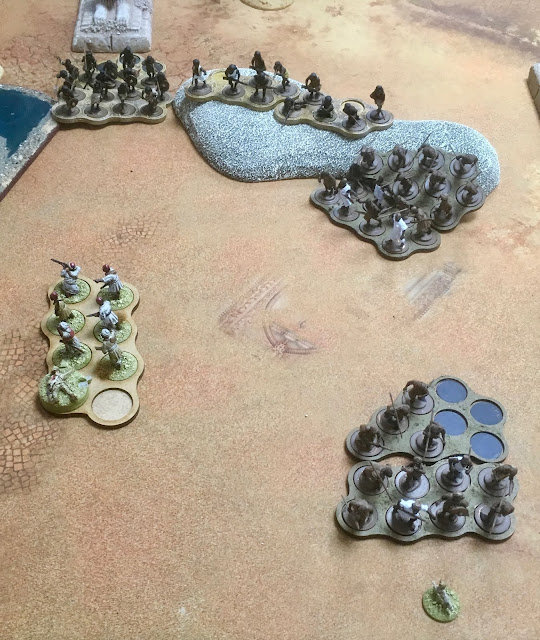 ...before destroying the Bazingers and then the Bengal Lancers!

Rifle fire from the Mahdist Irregular Infantry then Pinned the remaining two British Regular units leaving the Sikhs as the only Imperial unit able to fire. 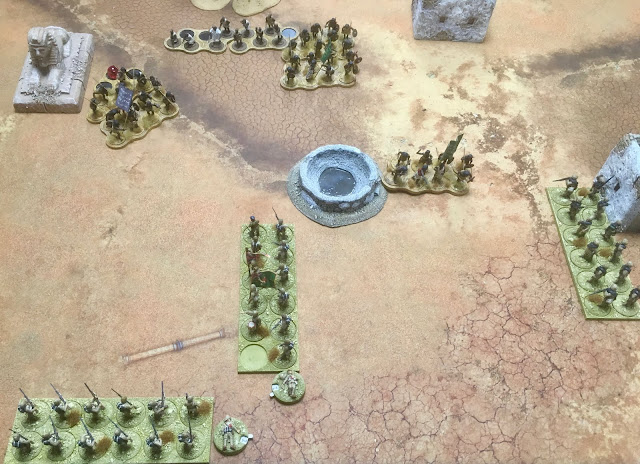 I managed to Rally one unit of Regulars but they had two units of Beja bearing down on them... 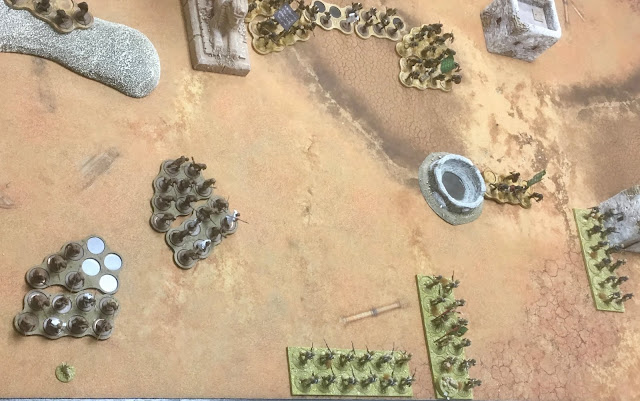 One of which Charged into contact and forced them off the table. The other Regular unit failed its Pin test for seeing a friendly unit within 12 inches destroyed and was now on -2 (the Pin markers looked nice I thought!) 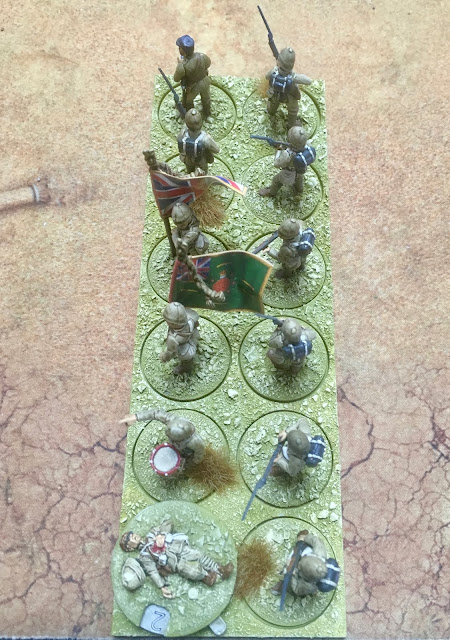 Elsewhere the Fierce Sikhs formed Close Order and despite taking some casualties to rifle fire managed to destroy a unit of Beja who charged them. Unfortunately though the stabby sticks killed enough Sikhs to take the unit strength under six and force them out of Close Order. 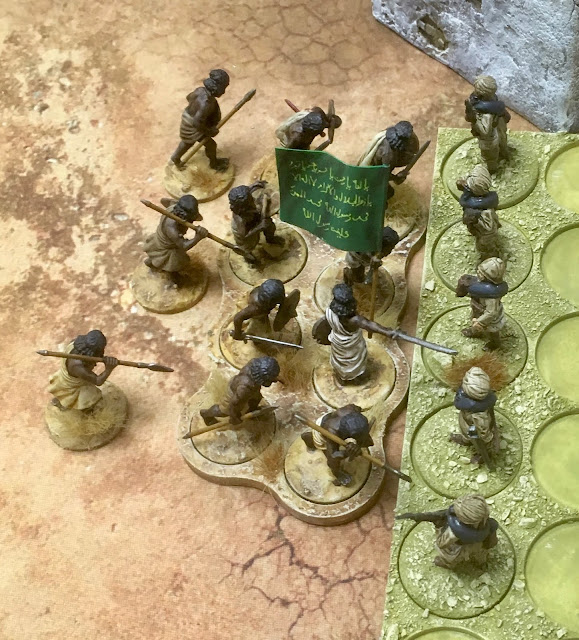 The Pinned Regulars were charged by another unit of Beja... 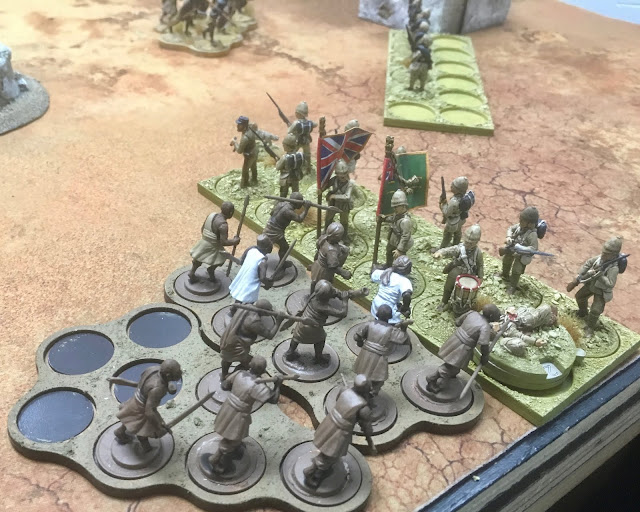 ...and suffered seven casualties. Surprisingly they Rallied next turn despite being on -3. Not that it was going to do them any good with lots of Fierce Beja with stabby pointy sticks bearing down on them! 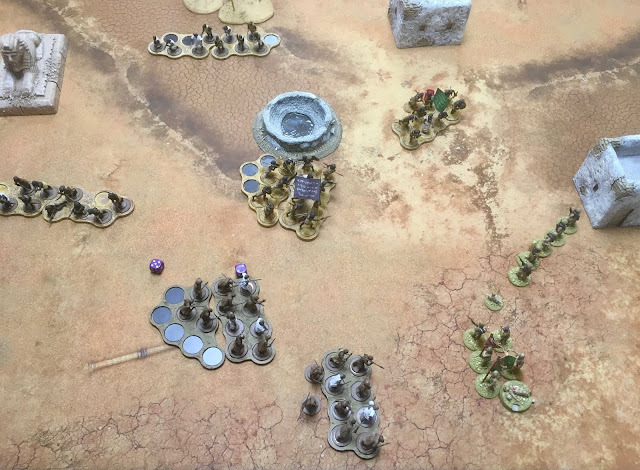 Next turn they were wiped out and the Sikhs failed their Pin test after seeing this. The Beja charged in on them... 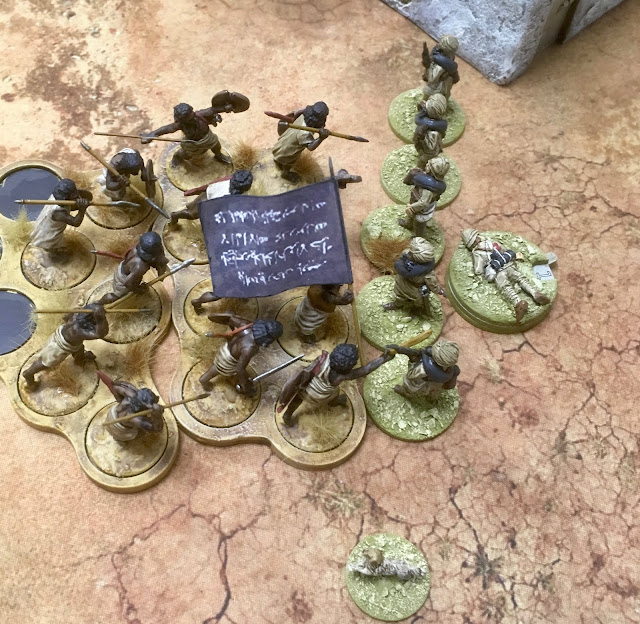 Disaster in the desert! To be honest I can't see there is a lot that I could have done to win the scenario given the fact that the Tribal Infantry can deploy within Charge range on Turn two. You'd have to be very fortunate with your dice rolling to pin them all.

Possibly I could have put the Regulars into Close Order on turn one but that would have meant them only being able to move just four inches a turn in  game I needed to get to the objectives all over the board and in other games I'd seen the Mahdist rifles quite capable of breaking a Close Order unit through Pinning, so I am not sure that would have worked.

We both agreed that the scenario was weighed heavily towards the Tribal units (to the extent Geogre did ask me several times did I really want to play this particular scenario!) and this reinforced what I had read on the Forum. Thinking about it the scenario might work better of the Tribal infantry appeared from a table edge on a Command roll like in the A Sigh of Relief scenario, all the Tribal units appearing so close to their opponent on turn two seems to unbalance the game.

In the scenario description the placing of the objectives is a bit vague and I could have placed half on my baseline right next to a unit with they could have temporarily occupied on turn one. I didn't think that was what the author intended so didn't do that.

This all said, despite the fact it was clearly only going to end one way (especially given the way my dice were performing), it was still a fun game and George and I are now hunting down old colonial wargame scenarios on the internet to use in addition to those in the rulebook.