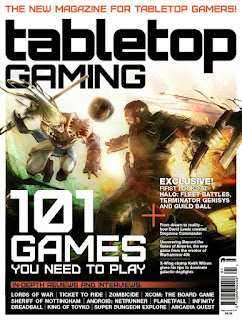 Wandering around the halls at the UK Games Expo, I came across a new magazine being launched called Tabletop Gaming. Published by Warners Group, it was apparently planned as a one off looking at "101 games you need to play", it will now be a quarterly release.

At 162 full colour pages it is a weighty journal and good value for a fiver. Unlike regular wargames magazines it covers a wide range of games including board games, card games as well as miniature games. Whilst this might  reduce its immediate appeal to most I would recommend trying the first issue, if only to widen your appreciation of the gaming hobby as a whole.

Buying it at the show I was given a sprue of two plastic terminator models from the new Terminator: Genysys game. This was being played at the show and did look but with an RRP of £70, I thought it overly pricey and gave it a pass...
Posted by Steve at 21:48:00