I got out the habit of painting my Donnybrook figures when I hit the Algonquin as I wasn't convinced I was getting the right skin tone. However keen to get back on the Donnybrook horse I decided to paint up a figure that I based and undercoated a while back and then ignored for the best part of the year. 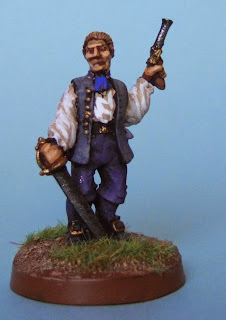 I'm not 100% sure who made the figure, I think it is Foundry and may be something to do with one of their Pirates sets. Whatever, I trimmed away his ponytail as too C18th and painted him up as some fairly well-to-do merchant type, leading a town militia against Indians, bandits, Government forces, whatever. Pretty pleased with how this came up so quickly, now he just needs a militia to lead!