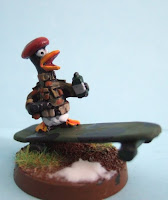 Naturally, no Killer Death Penguin Commando leader would dream of going into battle without a recce unit and fortunately Team Frog have included such in their range in the form of the S.P.L.A.T. (Special Penguin Light Assault Team), four Killer Death Penguins on skateboards!
Whilst the figures themselves were quite straightforward, being in a mix of helmets and berets it was obvious they had to be painted up as paras, the skateboards did cause me a temporary mental painting block. Despite some interesting (and very colourful) suggestions to a request for ideas on TMP, I did have a "eureka!' moment and painted them in the British WW2 'Mickey Mouse ears' camo pattern (Mickey being a cartoon character etc), and I think this has worked very well...