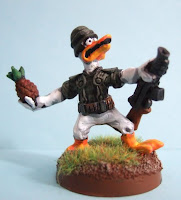 With the Killer Death Penguins sorted I needed to get some OpFor figures and decided to go with ducks! Team Frog's Duck squad contains four figures, but (like the penguins) I haven't had a chance to paint the power armour/duck robot yet.
I was a bit stumped initially on what colour to paint the ducks, brown or maybe black like Daffy? In the end a bit of Googling of cartoon ducks (obviously) brought up Donald and I settled on the white feather look as providing the best comic look and good contrast. The uniforms are vaguely American looking so I went with a faded 'Nam style green. 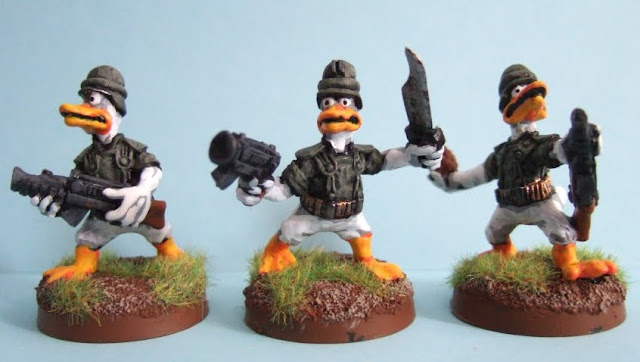 The ducks were a lot of fun to paint and I love the one throwing a pineapple grenade that literally is a pineapple! Unfortunately these are all that Team Frog do, so I may have to look at doing do some conversions to beef up the unit.
Posted by Steve at 10:19:00