As the minutes and hours tick down to Christmas I find myself continually answering the door as various postal agencies deliver parcels which then need repackaging in festive paper for joyous opening on the 25th! One surprise was a self bought gift for myself which I wasn't expecting to the new year, two boxes of the new Perry Miniatures European Mercenaries which I had ordered from Maelstrom Games for £16.20 a box post free. 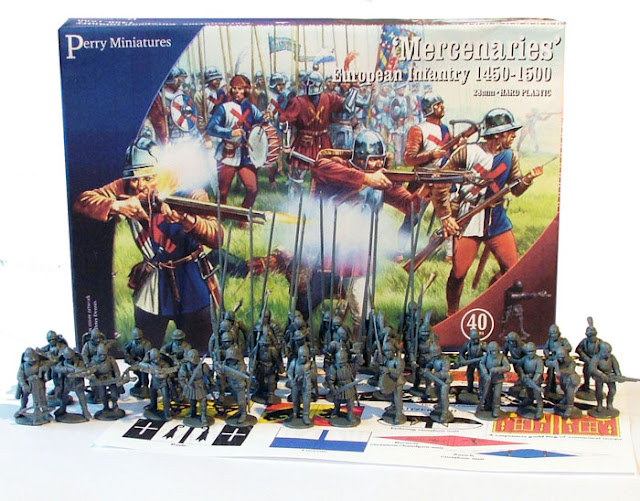 I've only managed a quick look but they do look bloody amazing, for your pennies you get 40 figures that can be made up as pikemen (up to 18), crossbowmen (up to 12), handgunners (up to 12) or halbardiers (up to 12), plus 4 command and lots of other gubbins including a nice flag sheet. I had intended to use these for a tentatively planned Wars of the Roses project (SWMBO is a big Richard III fan) but a quick comparison with a couple of old-Foundry WotR shows that whilst there is a slight height difference, I might be able to get away with using both in my slowly progressing Burgundian and Swiss armies.

Aside from answering the door and being dragged around Morrisons and/or Sainsbury's and/or ASDA by SWMBO I have been doing a little bit of painting for Christmas pressies but you'll have to wait until after the 25th to see, so not to spoil the surprise (assuming Saul drags himself away from COD Black Ops for five minutes and checks the blog!).
Posted by Steve at 20:10:00