A couple of days working in Paris has put a bit of a crimp in Salute preparations this week, looks like it’ll be another of those “damn close run things” but I hope to get the mould made for the aquanef by the weekend and then have a busy weekend moulding, painting and making scenery. SWMBO has offered her services as I painted the young ‘uns ceiling on Sunday rather than hid away in the games room!
Currently sitting in one of those box sized hotel rooms in a hotel near Gare St Lazare (which does have a nice GW opposite) and have just finished the latest Simon Fonthill book, Siege of Khartoum, by John Wilcox. The Fonthill novels are another in the genre of Sharpe-style historicals with an officer and NCO engaging in missions of derring-do, this time on the British colonial campaigns of the 1880’s. This is quite an interesting period (and one were the British army didn’t do too well) and previous books in the series have covered the Zulu War, Afganistan, the First Boer war, the Egyptian Campaign and now the First Sudan War.

Although one of increasing populated genre the Fonthill novels are well written and highly enjoyable. That said, I’d had this one sat around for a while as knowing the ending and having seen various films on the subject of Khartoum I thought it wouldn’t be as enjoyable as the others – wrong!

I really enjoyed Siege of Khartoum, well written and paced the story had me thinking of wargaming opportunities on many occasions, whether in the deserts of Sudan or the sands of Mars!

Wilcox’s lead female interest (the obligatory love interest) is also an interesting character as she is a war correspondent and the references to other correspondents and war artists, reminded me of the book I have on Melton Prior, a fantastic artist from the period. Imagine my joy when ‘Googling’ Melton Prior I find that the Perry’s have a war correspondents pack in their Sudan range, including a miniature of the bald headed artist (that’s one purchase sorted for Salute, I may have to peruse the Sudan range more closely!). 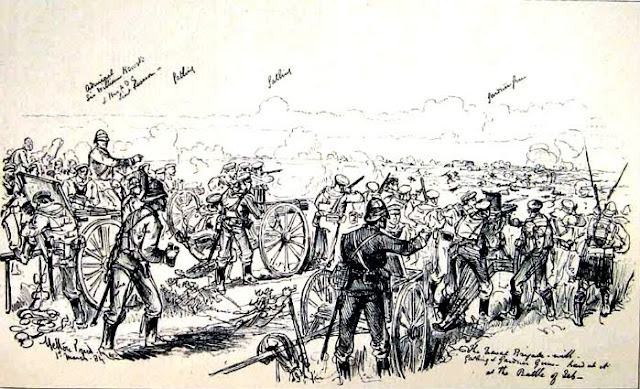