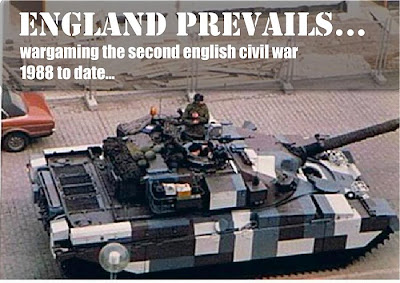 Back in the 1990's James Clay wrote a couple of articles for the SFSFW journal Ragnarok about a contemporary fictional civil war in England. With glasnost in full swing the idea of using existing modern wargames armies on England's green and pleasant shores was hugely attractive, especially with the addition of foreign volunteers joining the battle...

With the popularity of a Very British Civil War set in the thirties, my thoughts turned back to James' idea and the numbers of green painted modern armour and troops I still had which I had no desire to repaint and send to Iraq or Afghanistan.
So I've started a blog aims to resurrect James' idea, develop the background and give me an excuse to use my 20mm moderns in a temperate war zone (assuming I can find them).
At the moment I'm having some fun posting news stories from the alternative-history 'point of divergence' (the 1987 General Election) as a background to the outbreak of war...
Posted by Steve at 13:39:00