Viking In The Sun: Varangian Guard

With the 2nd edition of Lion Rampant due out at the end of the month, conversation down BIG has centred around what medieval games we'd be looking to get in. My suggestion of The Anarchy hasn't caught anyones imagination (apart from mine!) and with George having Crusaders and Arabs, and Steve sticking Arabs together I guess the First Crusade will be where we'll kick off! 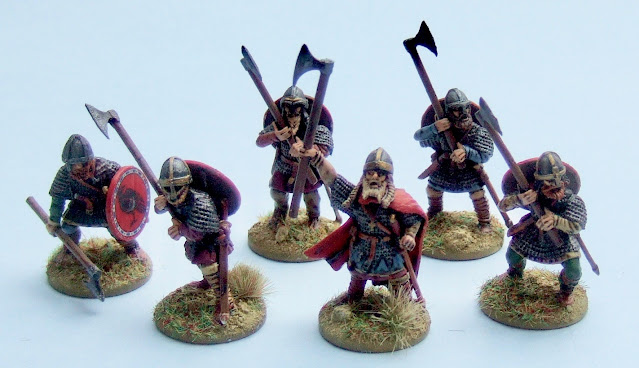 Flicking through the University of Edinburgh The Crusader States and Viking In The Sun supplements and pondering what I could raise from either 'Metal Mountain' or 'Plastic Hill'. The scenarios around Harald Hardrada in the latter caught my attention and with some Gripping Beast Dark Age plastics sat around I've decided to raise a 24 point Varangian Guard force which can fight either the Crusaders or Arabs.

Using both the Viking Hirdmen and Saxon Thegns box, along with some Byzantine heads from the Fireforge Byzantine Spearmen box, I made up Hararada and a unit of Elite Infantry (armed with Dane axes), and a unit of 12 Varangian Medium/Heavy Infantry. I'm not 100% sure how accurate they are, they are not in the pretty palace uniforms often illustrated, my logic is that sailing off to fight on Sicily Hararada's men would be less flash. Whatever, I am pleased with them... Next up some Byzantine troops to get the force up to 24 points.