As previously stated, one of the attractions of late '50's cold war gaming are the heavy tanks and for the Americans that means the M103... In 1958 the US Army had consolidated some of its M103's in the 2nd Heavy Tank Battalion, 33rd Armoured Regiment, replacing its original M103's with M103A1's borrowed from the USMC the following year. 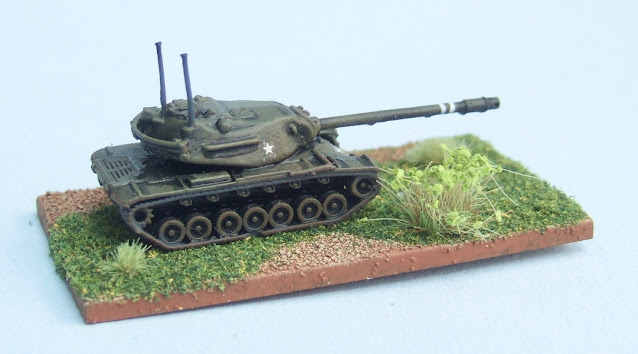 The models are 1/285th 3D prints from ResinHistoricals. I may be beginning to sound like an advert for them but they are great and just 60p a model. Like the British and Soviets, US tanks are over green but the I-94 Enterprises star decals and company markings on the barrels contrast nicely (not 100% sure about the company markings but some US Army units used barrel rings in Vietnam so I decided to go with that - and it helps you see the impressive length of the 120mm cannon).