It has been some time since my base coated Zulus have seen daylight (almost three years) since we refought Isandhlwana and Rorke's Drift using The Men Who Would Be Kings but with Ellen at Bristol Independent Gaming asking for some regulars to become 'BIG Champions', promoting rules and/or periods for local gamers looking to try something new I thought that getting some of my Zulu War plastic mountain finished would be a good idea.

As stated back in 2019 my idea is to create some 32 figure Zulu regiments that can be used for larger game rules like Black Powder or The Washing of the Spears, and split into two groups for TMWWBK. Over the last couple of weeks I've been beavering away so expect a tranche of Zulu posts over the next few days! 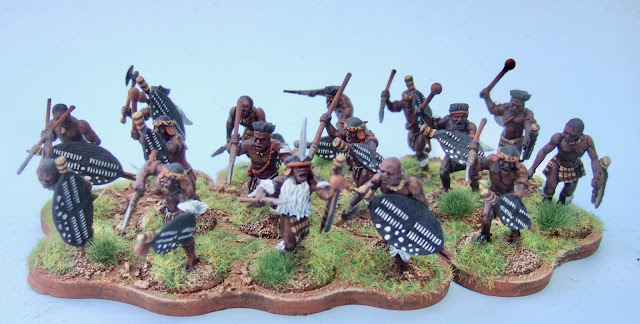 First up are the umCijo, The Sharp Point, an unmarried regiment with black shields with some white dots. The figures are a mixture of Perry and Warlord. If I was starting from scratch I would only buy Perry Zulus but with 'Plastic Mountain' having over a hundred Warlord ones (curse you eBay habit of yore) I found they mixed ok.

Panting wise you may be surprised that I did not 'dip' the figures. These were undercoated with a dark Sepia Brown spray, drybrushed Flat Brown and then with loin cloths, spears etc painted, washed with Agrax. The white money tails were then based painted white and then white Contrast painted on which gives a nice shading and (IMHO) looks better than drybrushing white over black.