Sharp Practice: So Glorious A War (Day Two, Game One)

Sunday saw a change of partner for my next Sharp Practice game (I don't think Jenny had put in a transfer request after the previous day's SNAFU but...) playing with overall British force commander Julian and his force of 55th Foot. In our first game we had to persuade some noteworthy civilians to evacuate their homesteads as the French army was marching down the valley! 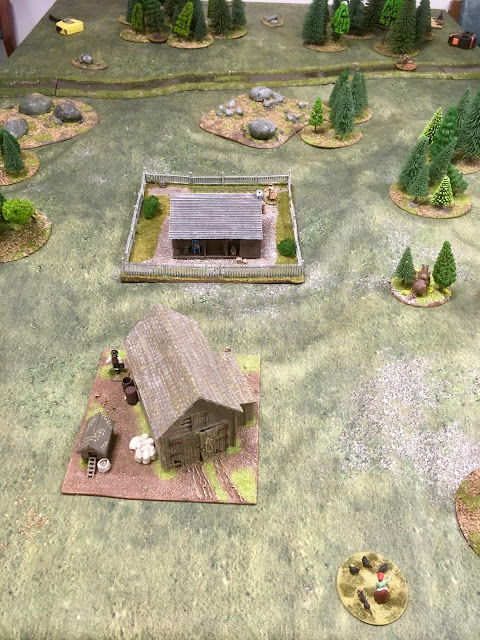 Julian sent forward a group of the 55th along with an officer tasked with persuading a young lady to leave  her home so not to suffer Gallic depredations! 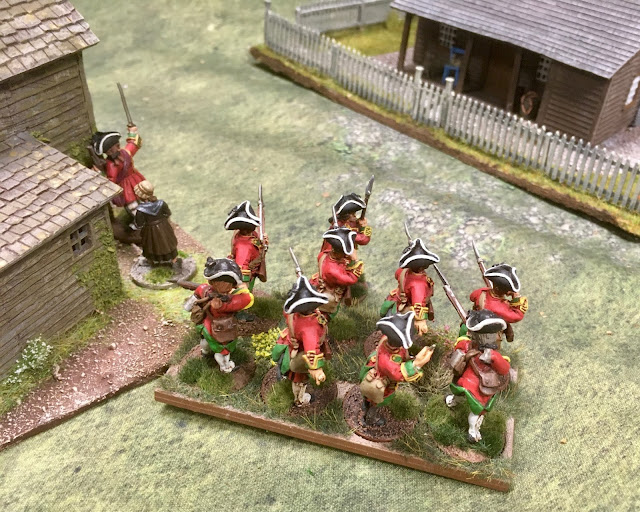 And here came the potential depredators! Three groups of (quite) smart French line. 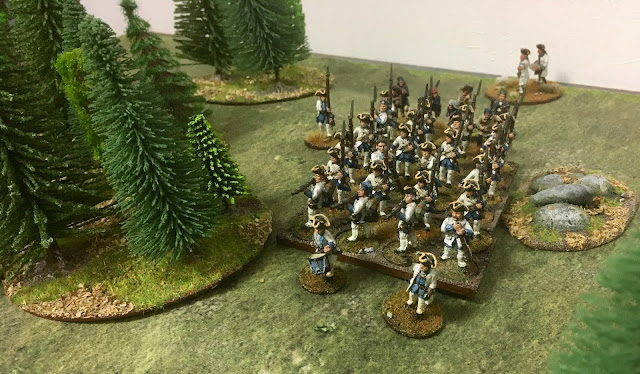 Though not as smart of the recoated 55th Line who marched forward to confront the enemy! 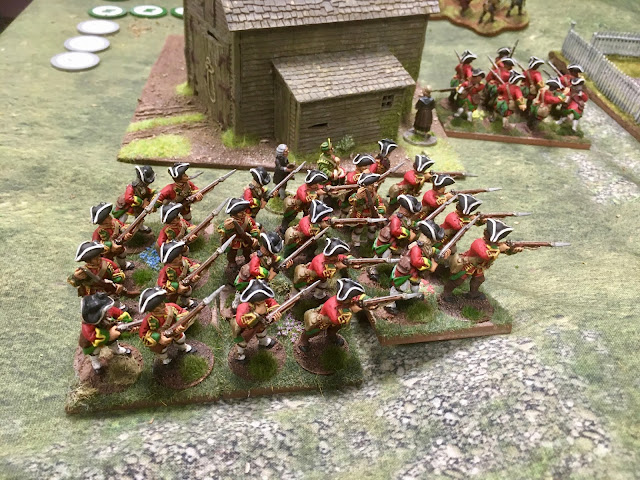 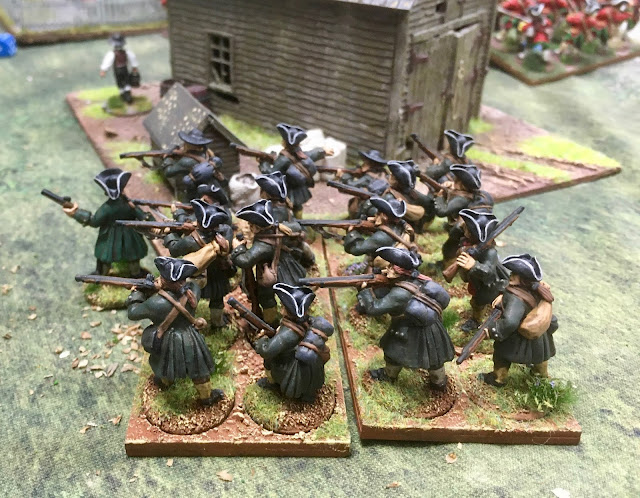 Entering her home the officer waves his sword around in an attempt to convince the young lady of the need to go with him. Requiring a total of 24 points to convince her, Julian managed to roll 3 on 2D6! 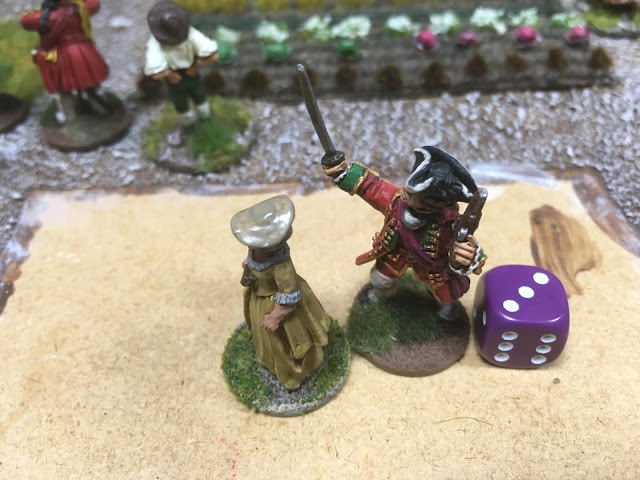 That said my attempt to convince a preacher in the other building was no better with my dice rolling also totally a measly 3! 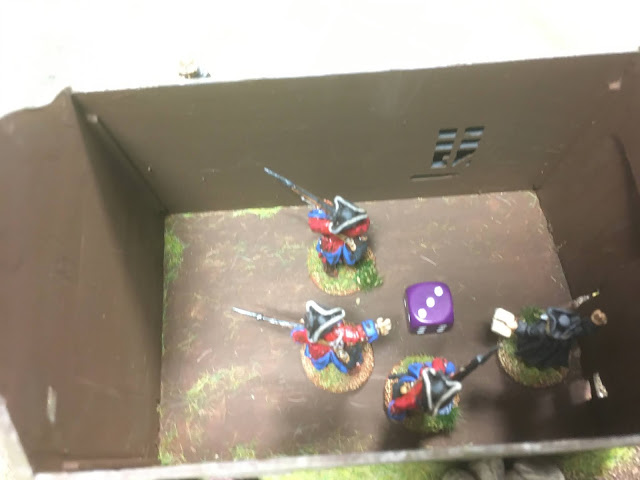 Our failure to be suitably persuasive was concerning as the French line crossed the river and advanced on the buildings. 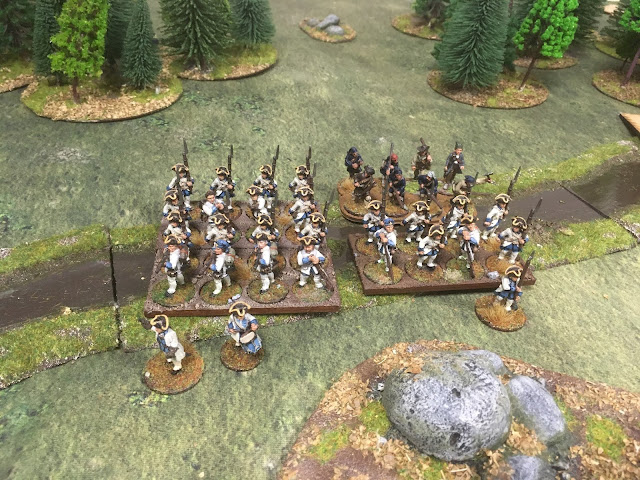 Supported by some 'scruffy' types who hid in the rocks... 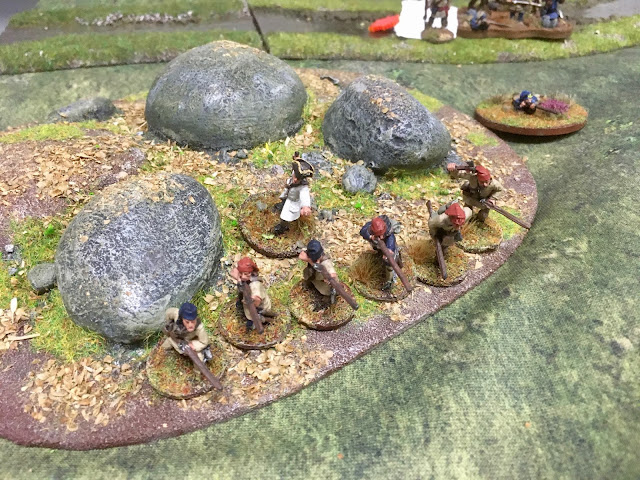 Spotting the threat offered by the French the 55th Foot stoutly advanced to confront them... 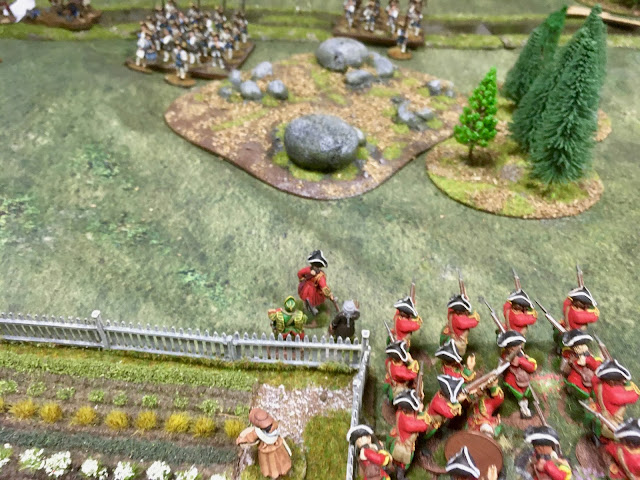 As the officer started to become more persuasive. 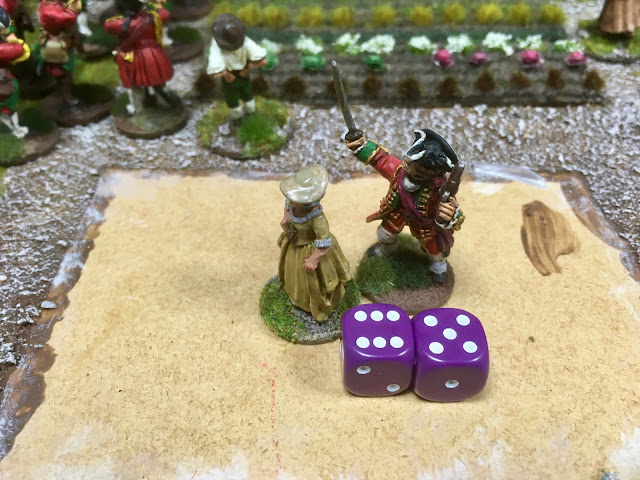 The detached group of 55th line spotted some movement on the left flank and opened fire! 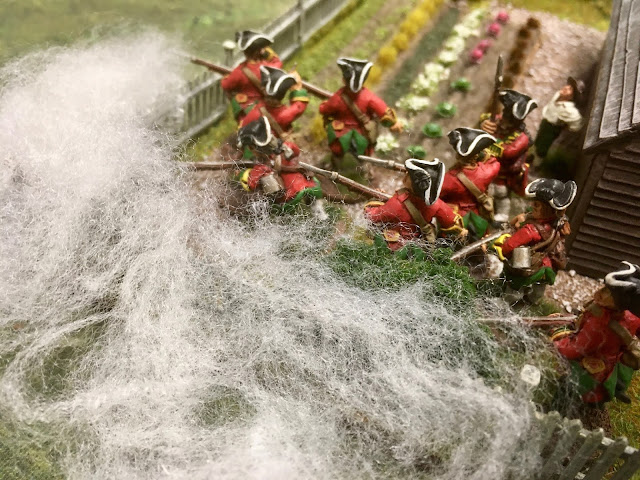 It was two groups of 'scruffy' French who returned fire. 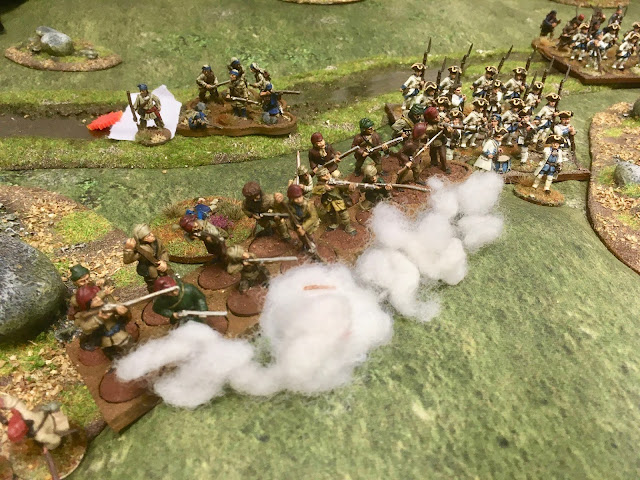 The 55th snapped into line and presented their muskets at the advancing French line... 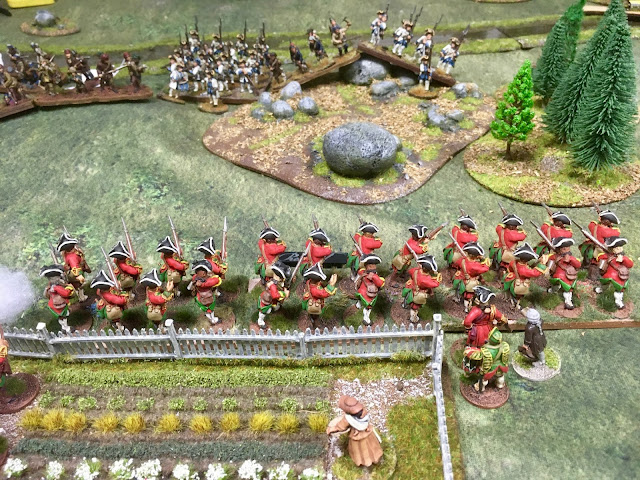 Whilst the officer has almost convinced the young lady to evacuate with him! 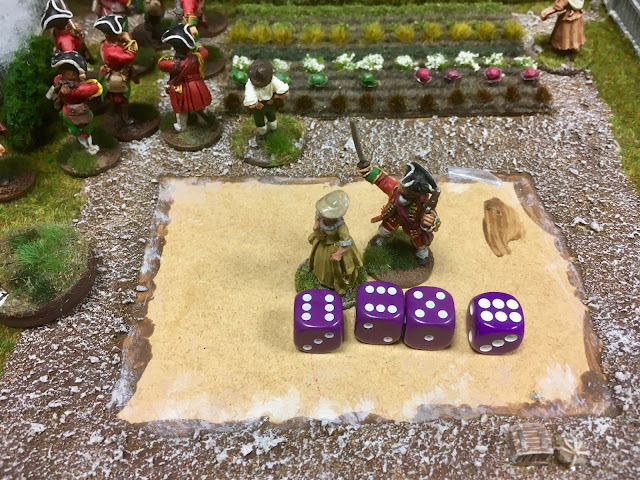 Standing resolute the 55th Foot waited to unleash hell on the advancing French... 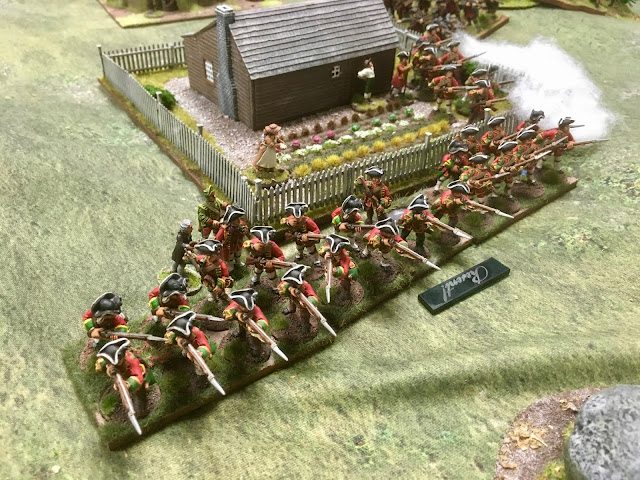 As did the Lower Counties troops who had formed into line too. 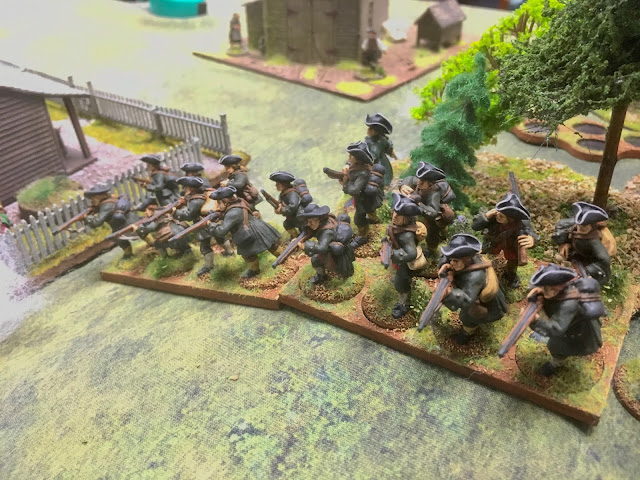 Success! The officer convinces the young lady to go with him to safety... 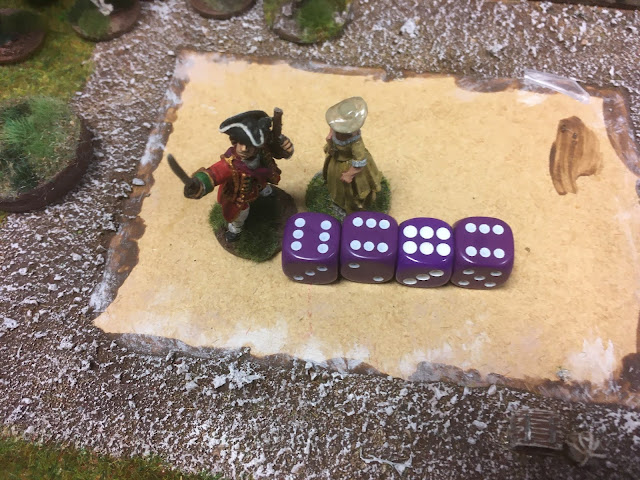 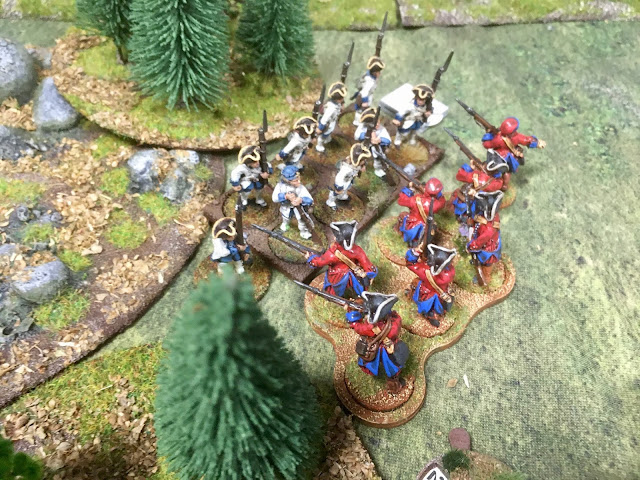 Who wiped out the American skirmishers, for the loss of just two men, though their officer was wounded. 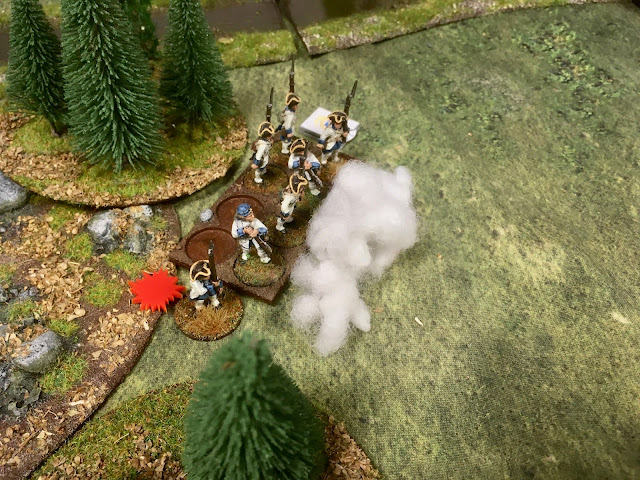 Meanwhile the second civilian was also convinced of the seriousness of the situation and the need to retire to safety... 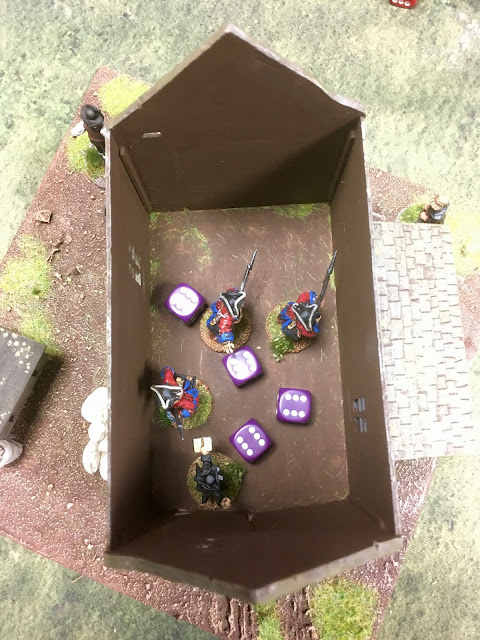 Suddenly on the British left a group of Huron appeared out of the dead group and fired at the Lower Counties Provincials, killing three of the American soldiers! 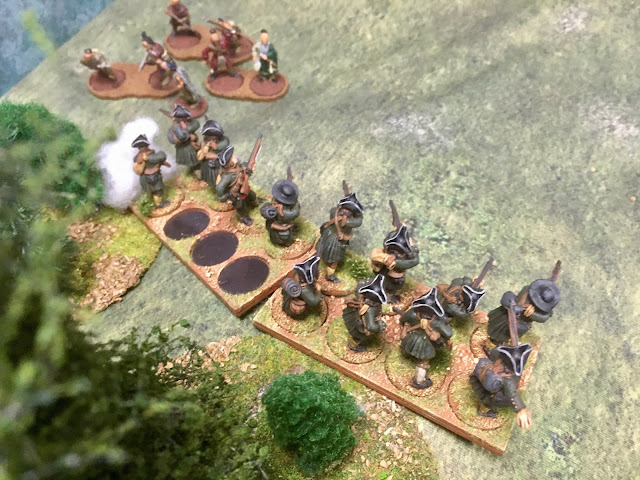 Before charging into them forcing the Provincials to fall back, killing their leader. 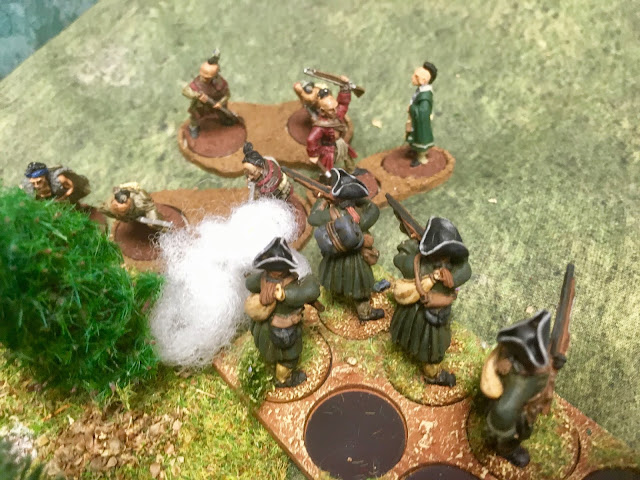 Matters were not completely going the French way though, the 'scruffy' unit having suffered badly over a few turns from fire by the Provincials and the detached 55th with much Shock having been piled on them. 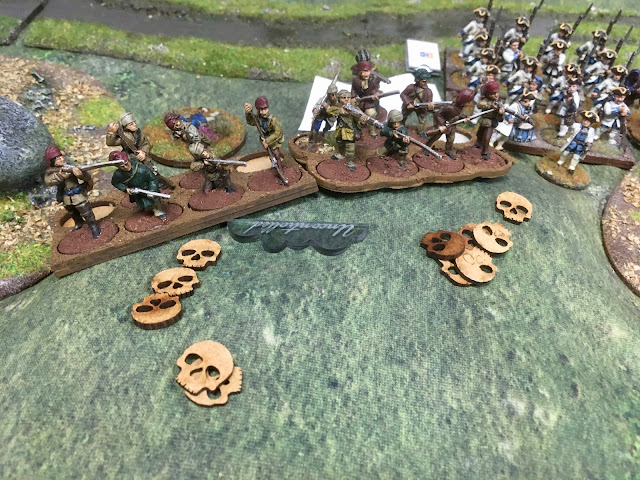 Things then got worse for them as the main body of the 55th Foot opened fire! 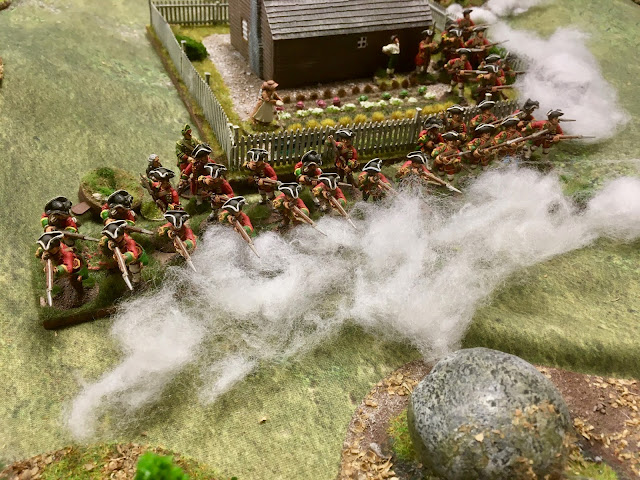 Their volley spreading along the French front forcing the 'scruffy' types back and piling some Shock on regulars. 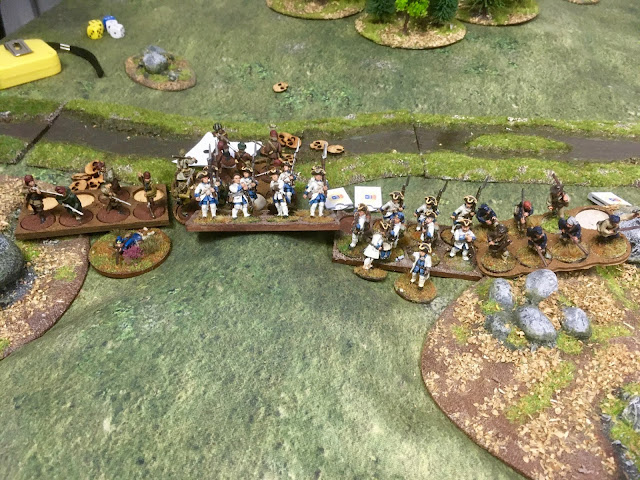 This did not however stop the French troops firing their own volley back at the 55th and a bloody firefight ensued! 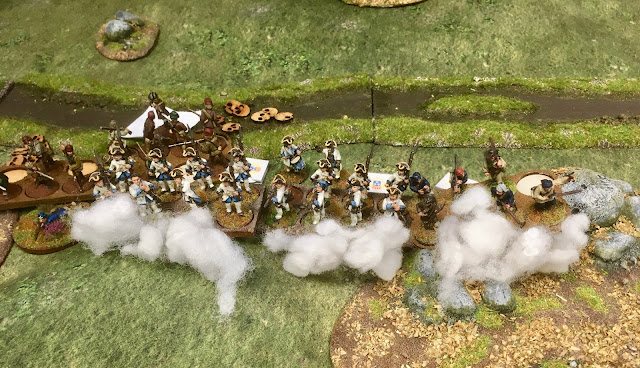 The first civilian reached the safety of the British deployment point and the remaining Marylanders moved swiftly to the left flank to try and stem the Huron advance. 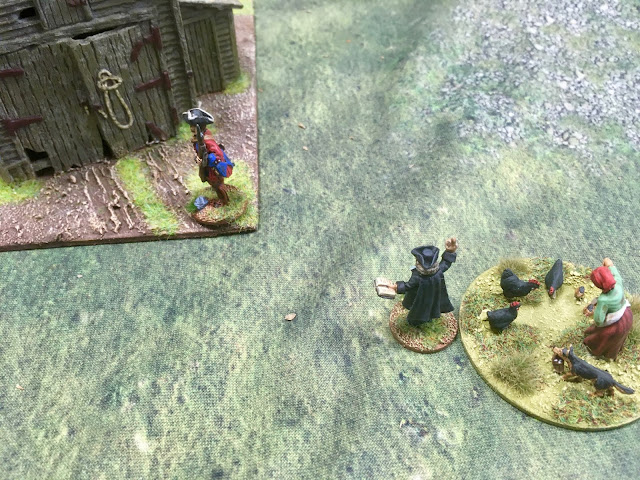 Which, with the support of a group of Militia skirmishers, they managed to initially do. 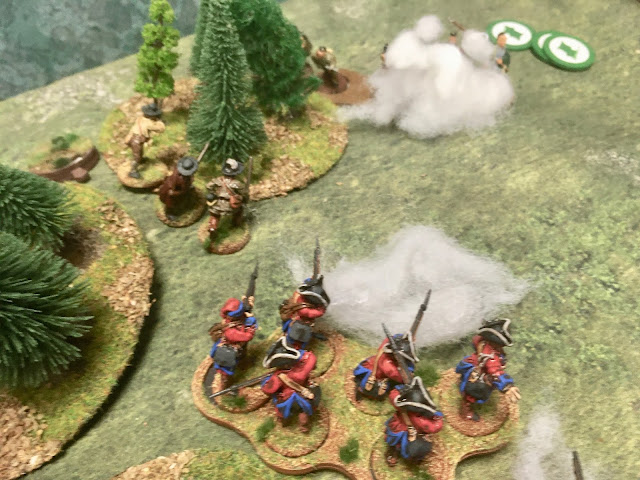 At this point we had to call an end to the game as we had gone well into the lunch break and the other gamers had finished their battles much earlier.
Although we had rescued the civilians, Julian and I had still not managed to achieve our primary objective of reducing the French force morale to zero, and with ours now on two at this point (the loss of two of my leaders not helping), doing so was looking extremely unlikely.
That said the 55th and the Provincials had given the French a bloody nose and no young lady would be subjected to Gallic depredations that night!
Posted by Steve at 11:01:00