My final game at the So Glorious A War Sharp Practice event saw Julian and myself up against Brian and Carol. Following on from the last scenario we now had to escort a small group of civilians to safety (if that puts you in mind of that scene in Last of the Mohicans were the British are evacuating the fort and get ambushed, you won't be far off!)

The Maryland Provincial skirmishers operating as two groups with one leader this time pushed up the left flank... 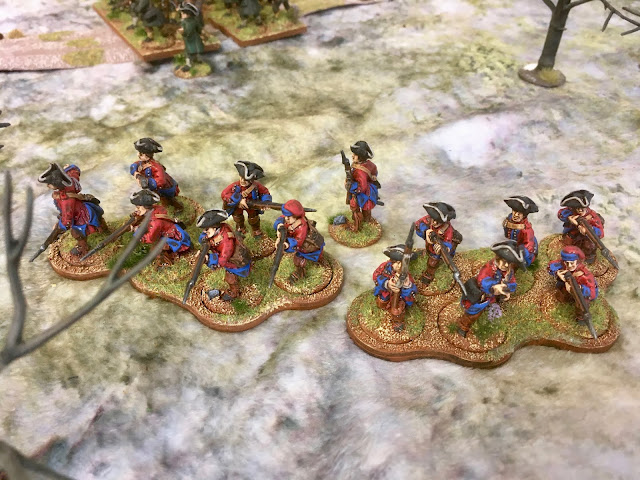 Shadowing the main force of 55th Foot and Lower Counties Provincials who advanced up the road to safety. 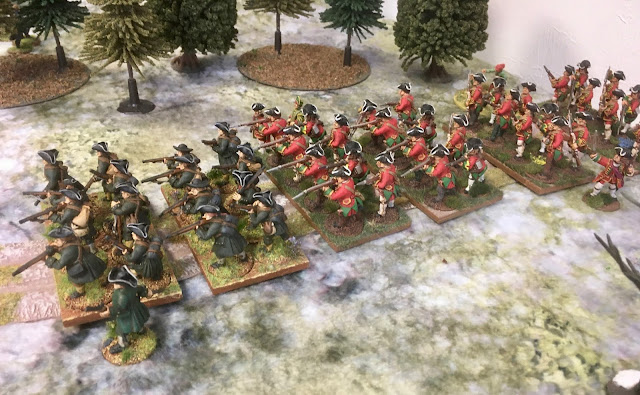 Good time was initially made with the Anglo-American force crossing the river with nary a smell of a Frenchman! Hidden in the woods on the right a group of Militia skirmishers escorted the civilians. 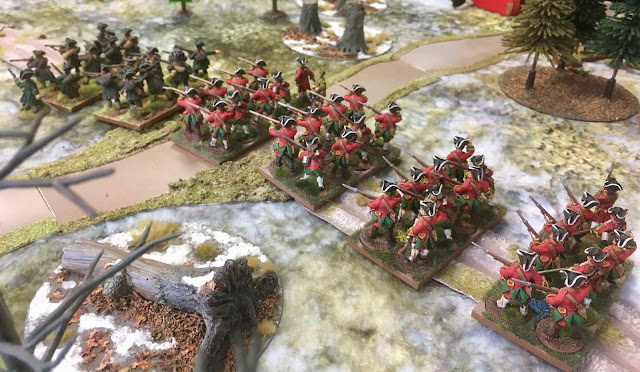 One group of the Marlyanders also advanced across the river capturing the French secondary deployment point still not having seen any enemy! 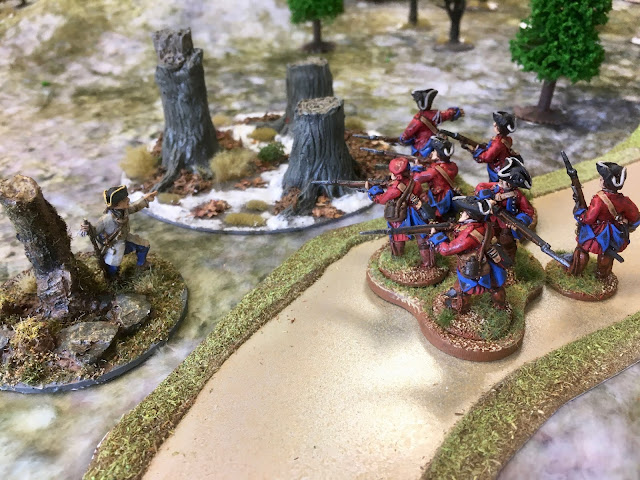 Then out of the trees on the hill one group of 'scruffy' French appeared.... 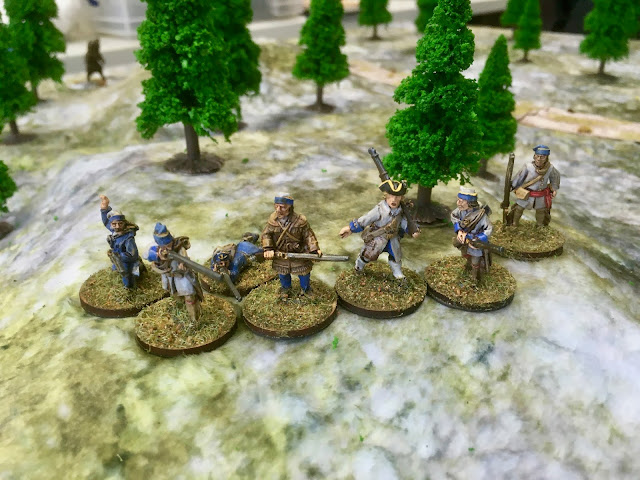 Followed by a second... 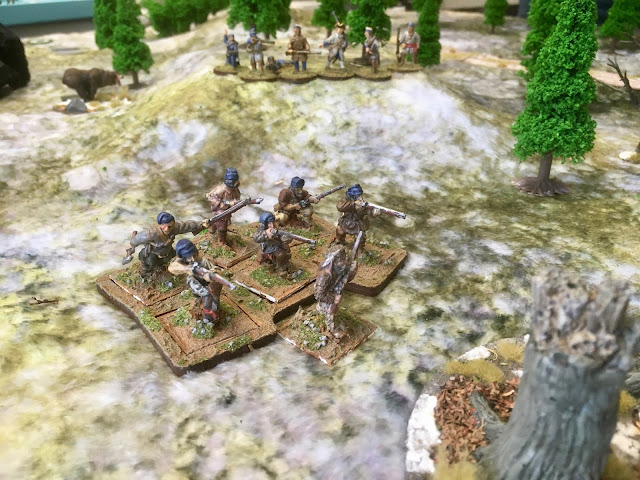 Who moved forward to engage the advancing American skirmishers, their opening volley killing one. 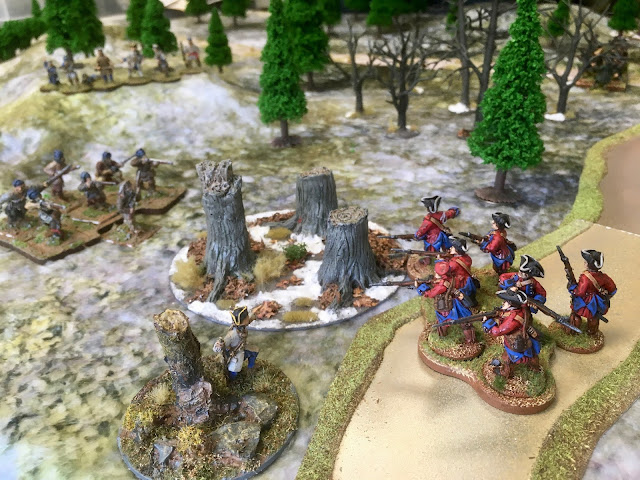 The Marylanders returned and the French took some Shock. 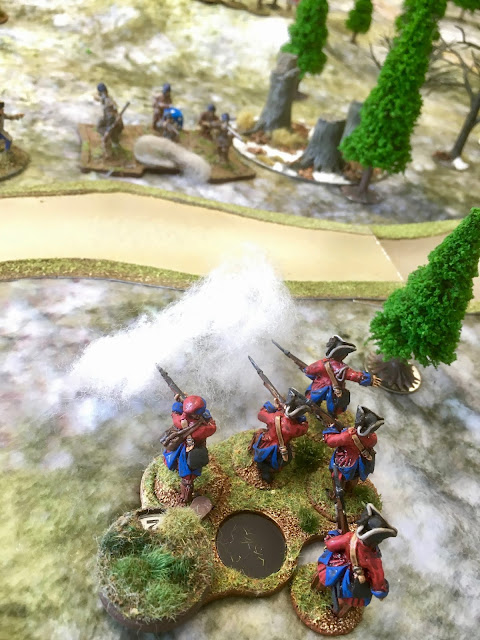 Whilst an officer of the 55th was detached from the main column to take command of the second group of Provincial skirmishers who had fallen behind. 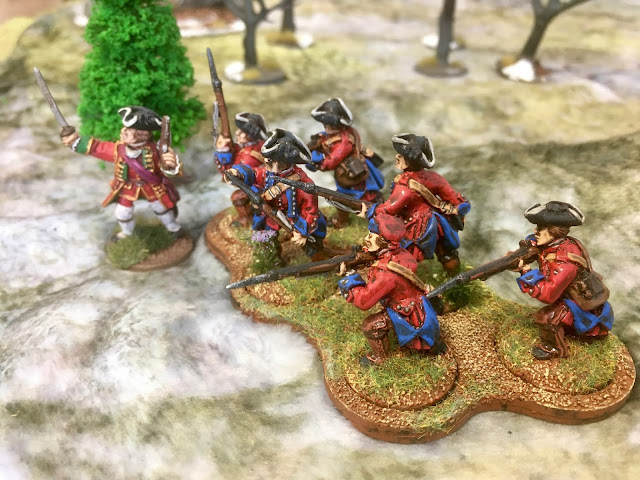 Under Regular command their musket fire took down two of the French skirmishers... 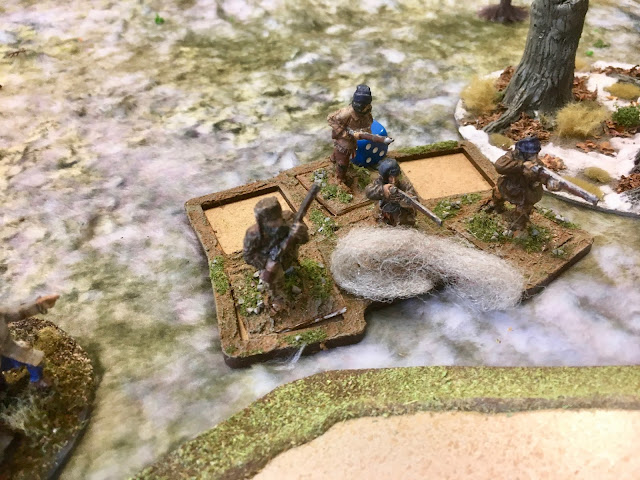 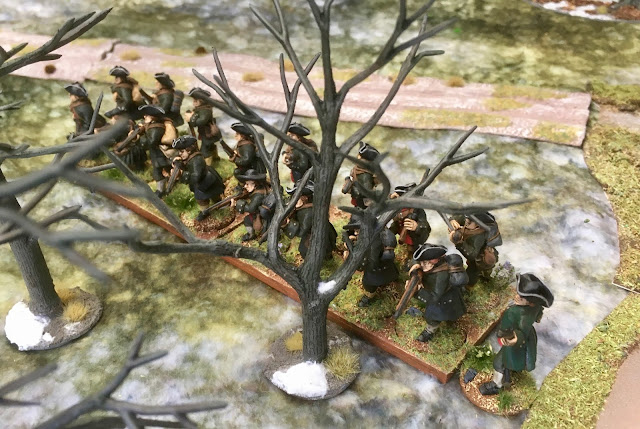 To protect the flank of the 55th as they advanced down the road. 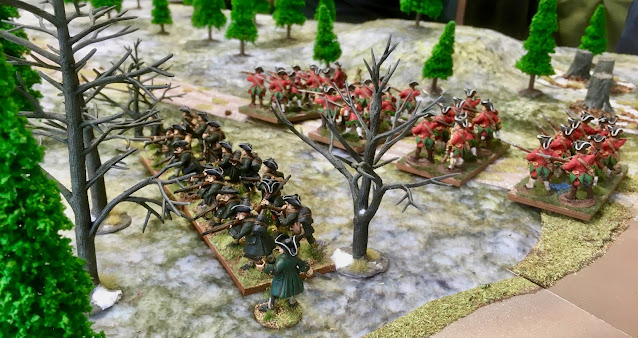 The threat was more 'scruffy' French on the hill who started firing at the British column. 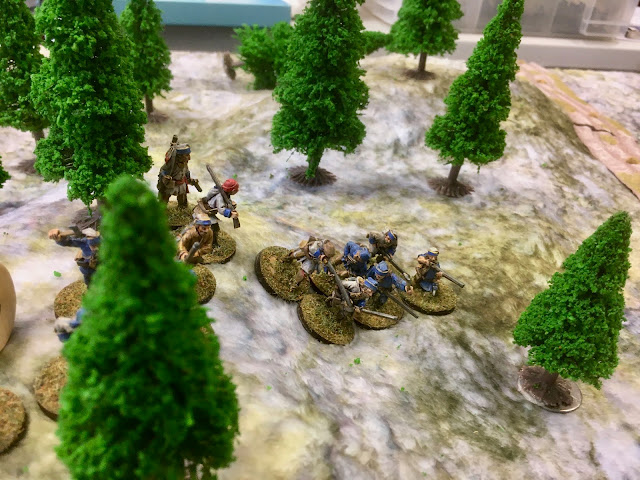 The 55th continued to advance down the road whilst behind them (just in picture) the civilians and a group of militia skirmishers moved slowly along the right flank hopefully towards safety. 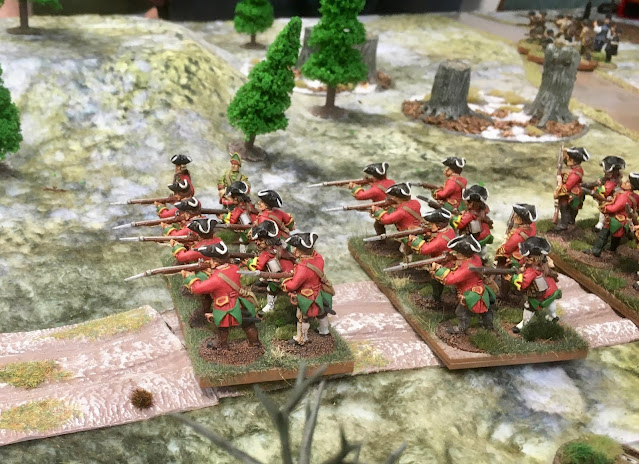 With the threat of the French on the hill to the left flank of the advancing 55th they snapped into line to face the enemy. 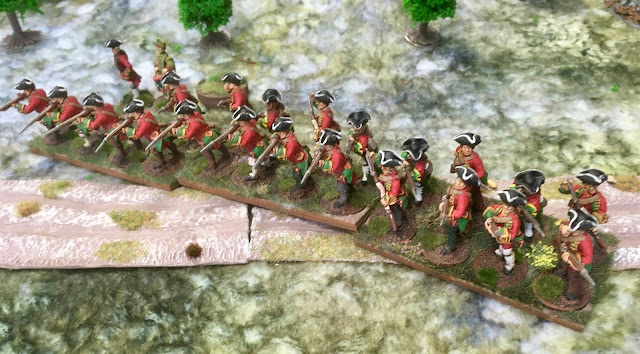 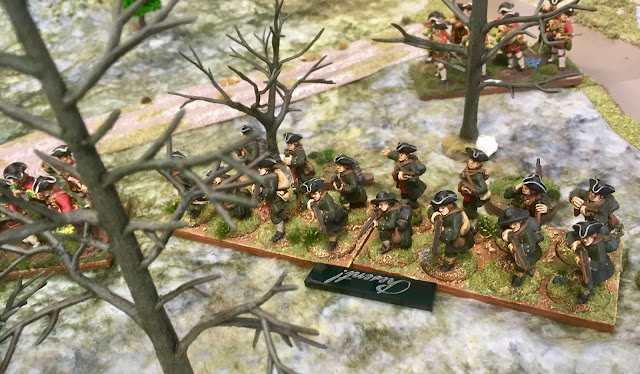 And fired a volley at the French to their front! 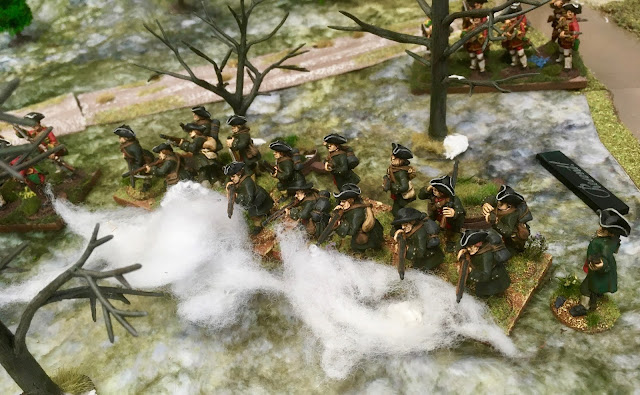 Followed by one from the 55th Foot! 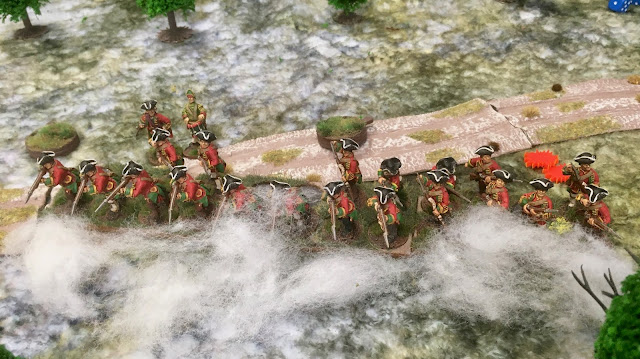 The French on the hill lost men and reeled from Shock inflicted. 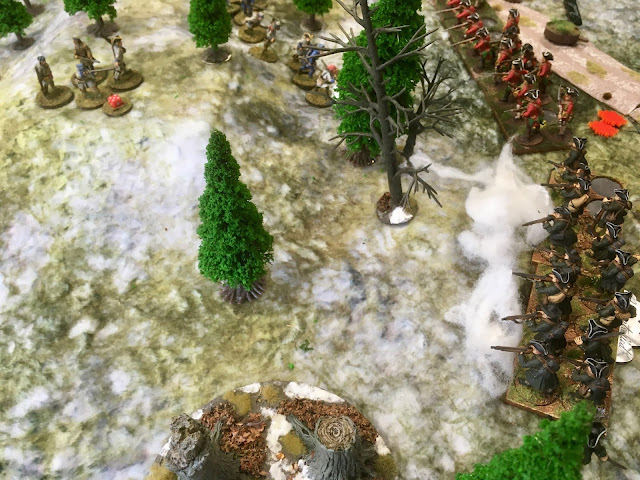 However it was not all one way traffic with the 55th having sustained some casualties and taken Shock. Despite this Julian felt comfortable to detach one group and have them advance further down the road under a subordinate commander. 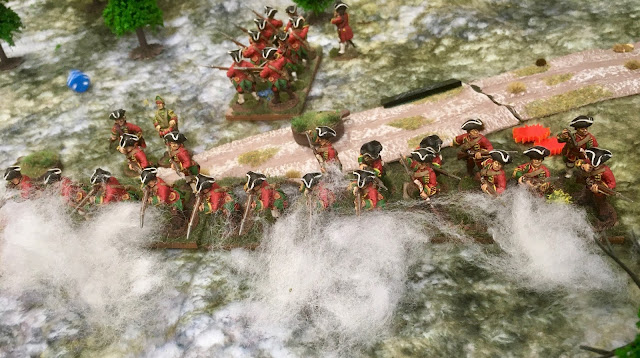 The Marylanders firefight with the French skirmishers to their front at the river continued... 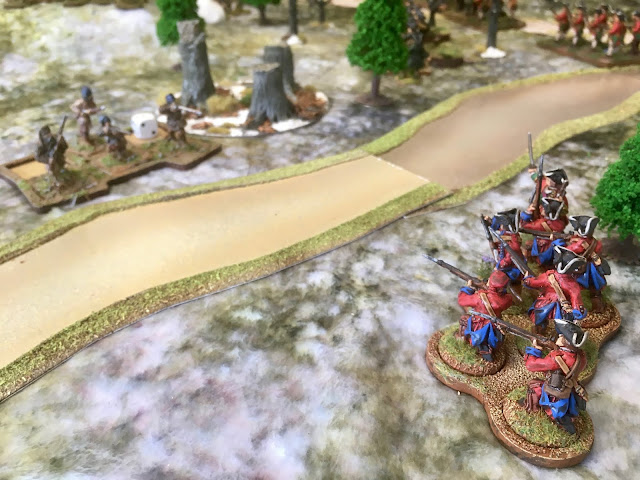 But eventually the French broke and fell back past a bewildered Grizzly Bear! It was at this point that the French sprung their trap!
They had been moving their mobile deployment point from its initial starting position on the hill on the left further and further back and then across to the right. They then deployed troops in the woods to the right of the road, the first group firing at the American militia escorting the civilians killing two and piling Shock on them. 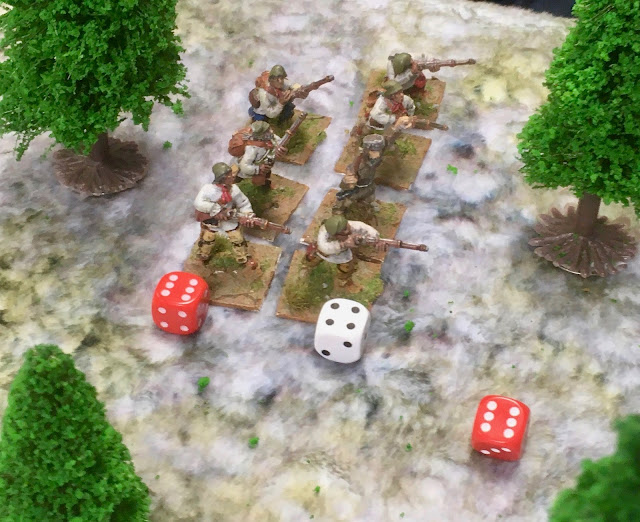 Whilst another group deployed and fired into the 55th on the road!

This caused one group of the 55th to break and run across the front of the Provincials into the face of an uncontrolled American volley! 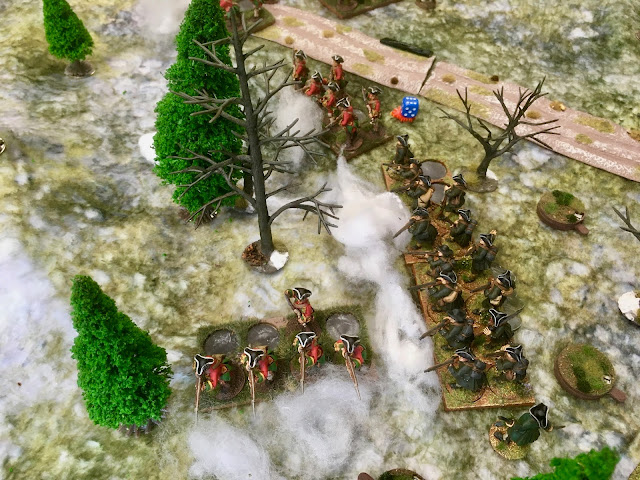 The Marylanders eventually managed to finish off their French they'd been having a private battle with all game. 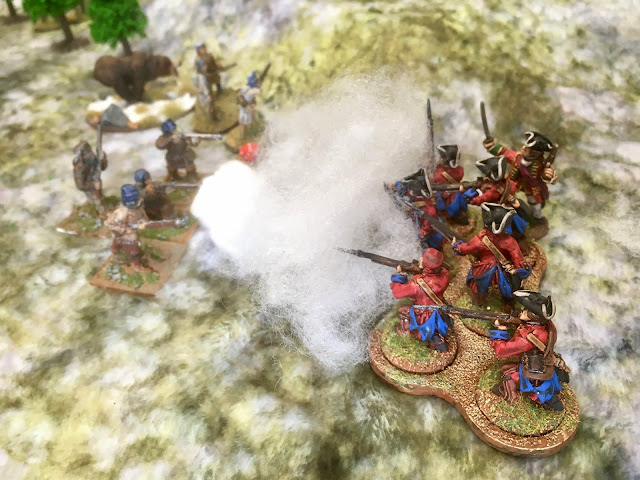 How quickly things had unravelled for the British. The 55th were badly bloodied, the Lower Counties line still firing wildly away at shadows in the woods and the civilians and their Militia escort falling back away from safety! 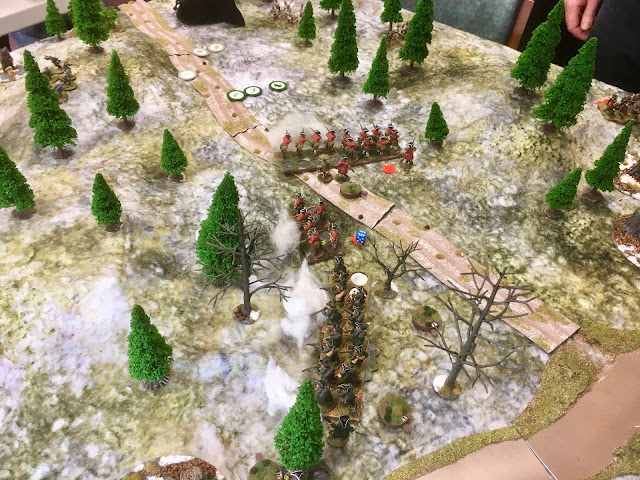 Another French volley slammed into the rear of Militia and their cares the amassed Shock forcing them break... 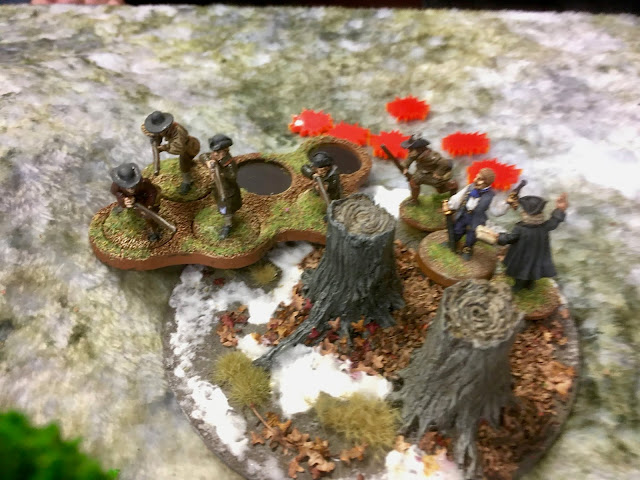 In a desperate move one group of the 55th was detached, fixed bayonets and charged the French on the right, wiping out one group who were caught in the flank. 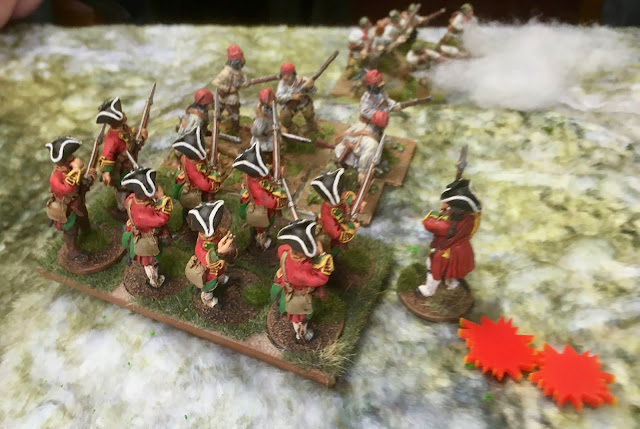 However it was all in vain as the Militia were shot at again with one of the group being hit. That turned out to be one of the civilians who was killed outright and as a consequence the British Force Morale fell to zero. 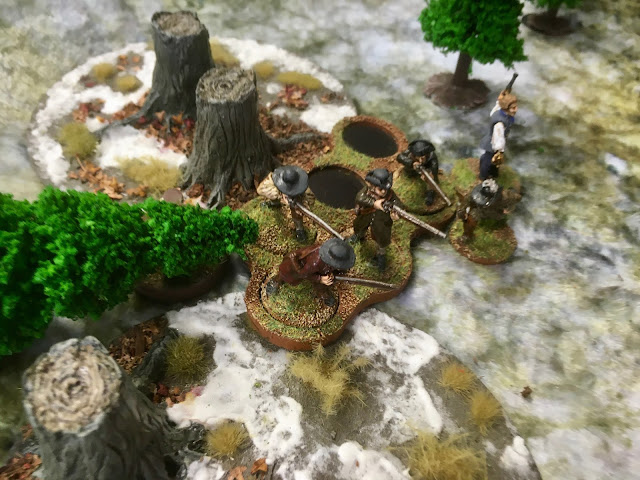 Well that was a bit of a schooling! The use by the French players of their mobile deployment point was excellent and we had certainly been lulled into complacency thinking the French threat would all be from our left when in the end the coup de grace was delivered from the right after they moved their deployment point down and across the table.

Overall a great weekend of Sharp Practice gaming and in a period I hadn't played a game in until two days previous. Thanks to my opponents, unfortunate partners and to David and Phil for organising the event.