George, Steve and myself played our first game of Poseidon's Warriors down BIG last night to see how they worked with a view to using them for our planned Salamis refight sometime later this month. With George in the process of repainting his galleys, I split my six squadrons of Persian triremes between us, whilst Steve brought six squadrons of Greek triremes to the party. In games terms we classed the Persians as Fast Triremes, which gave them the edge in speed but a reduction in sturdiness, whilst the Greeks were designated Slow Triremes.

Due to social distancing protocols in place at BIG Steve and George lined up across the board whilst my squadrons suddenly appeared on the Greek flank. 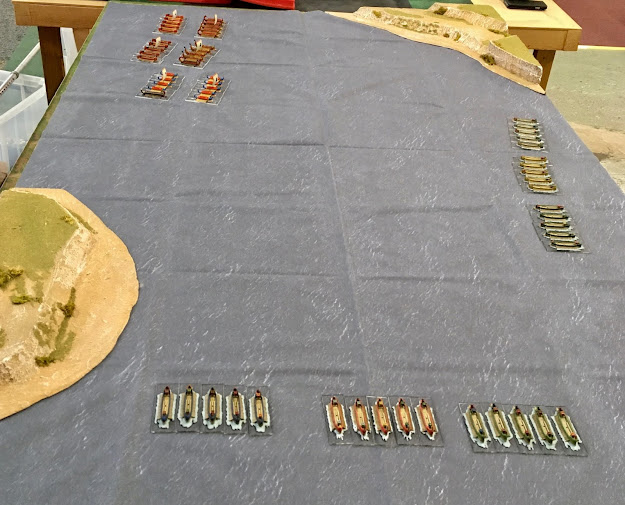 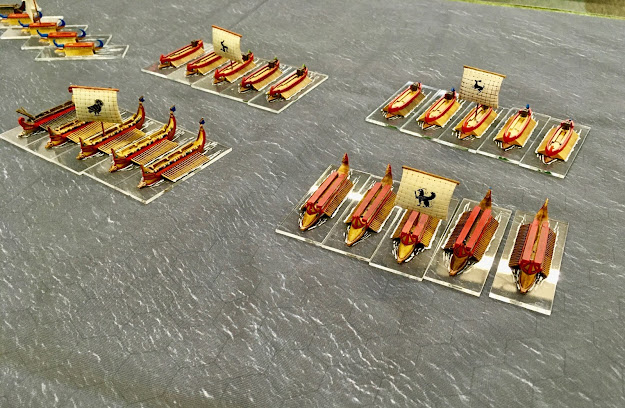 Whilst he detached two squadrons to deal with the Persians on his starboard flank... 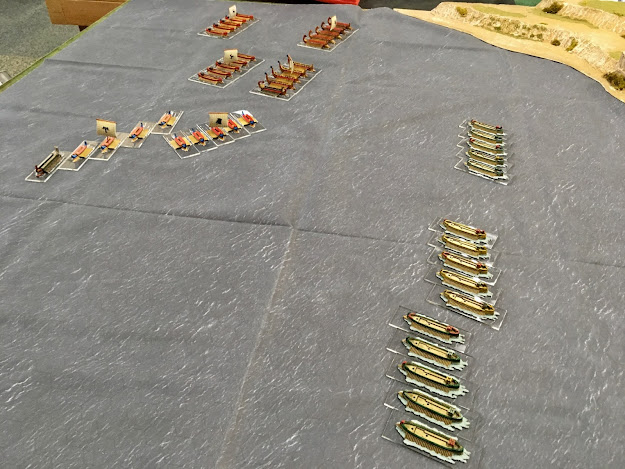 With his flank now protected, Steve focused on turning George's left flank, whilst I tried to manoeuvre my squadrons into some open sea to attack the blocking Greeks. 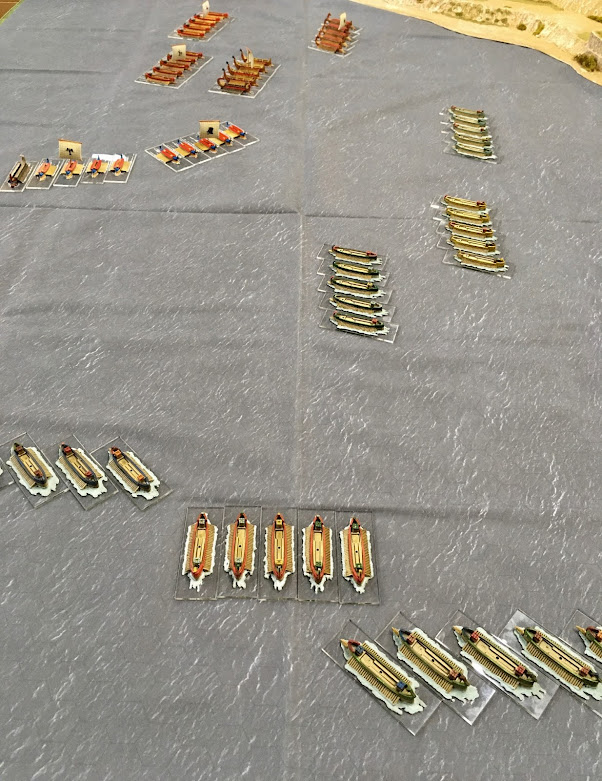 George decided to concentrate his fleet on the foremost of the blocking squadrons in an attempt to open up a gap both he and I could exploit. 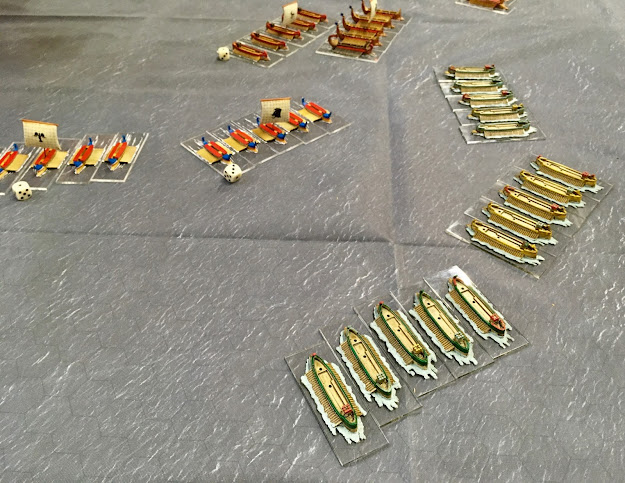 Unfortunately Steve gained the initiative next turn and launched a ramming attack against George's exposed squadron, sinking one galley.
It was at this point we felt the rules to be somewhat lacking... Aside from rolling for the initiative, the attack on George's galley involved absolutely no dice rolling at all. Steve did not have to roll for the attack (he just moved his ship forward) and in the rules Fast Trireme's only have one hull point and no saving throw, so it automatically sank. We all agreed this just felt wrong from a gaming point of view. 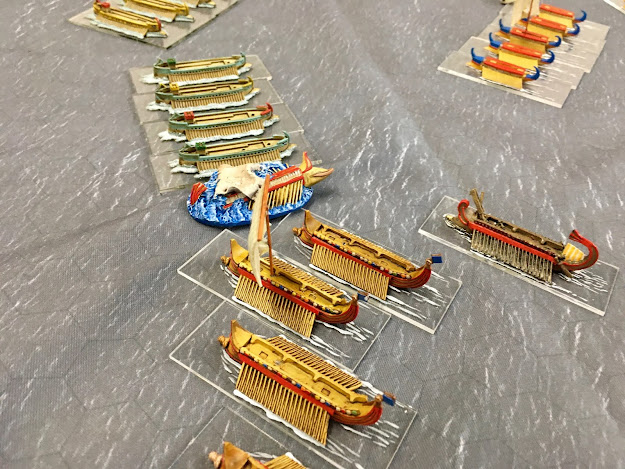 We decided to allow the Fast Trireme's a 6+ save and upgraded the Slow ones from 6+ to 5+.
We then hit our next issue...
In the next turn one of George's galleys sunk one of Steve's. George then moved a second forward to hit another Greek galley, moving over the wreckage of the one just destroyed. Using the Debris rules he rolled a D6, scoring 5 and his ship sank! There is a 50% chance of taking one damage point crossing debris and with the Fast Triremes only having one Hull Point... Glug, glug, glug!

We decided the impact of debris was too powerful so changed the rule to only causing damage on a 6 (not 4,5 or 6) and also at the end of each turn rolled to see if the debris had sunk on a 50% chance.
Steve followed up George's abortive attack, swinging one of his flanking squadrons round and rammed into the Persian squadron sinking another two as George's saving throws failed. 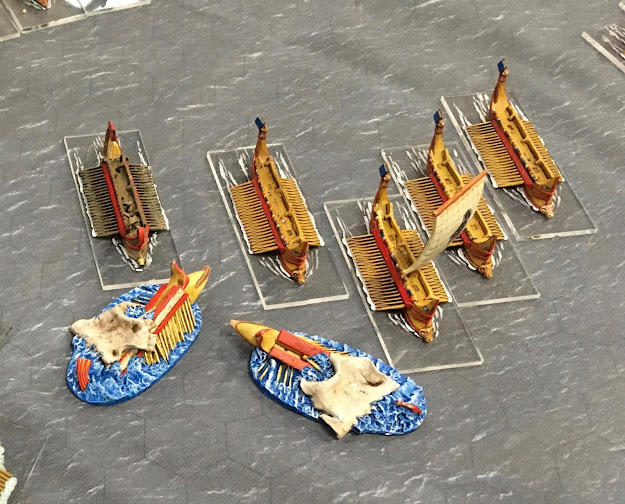 Steve then moved his flank squadrons into a facsimile of the kyklos defensive formation effectively securing his flank as any bow to bow attack by the Persians would result in one point of damage to each ship, effectively meaning any Persian ramming would likely be a suicide mission (under the rules as written, the attacking Persian galley would automatically sink, the Greek one not an a roll of 6 on a D6). 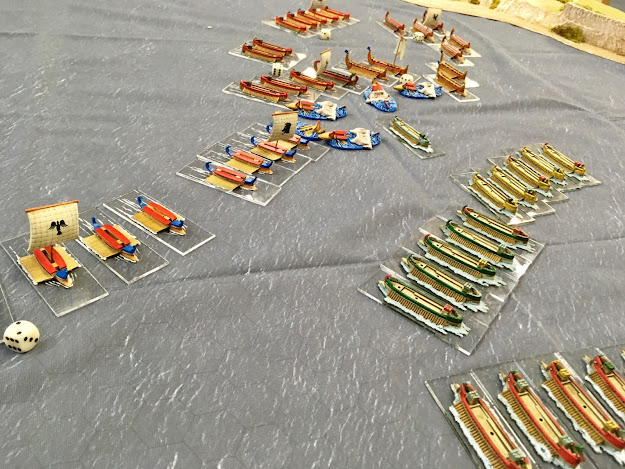 Steve moved one of the flanking squadrons forward maintaining his formation, sinking another of George's galleys and effectively stopping the remaining Persians from being able to even suicidally ram the Greeks (they need move a minimum one inch to do so). 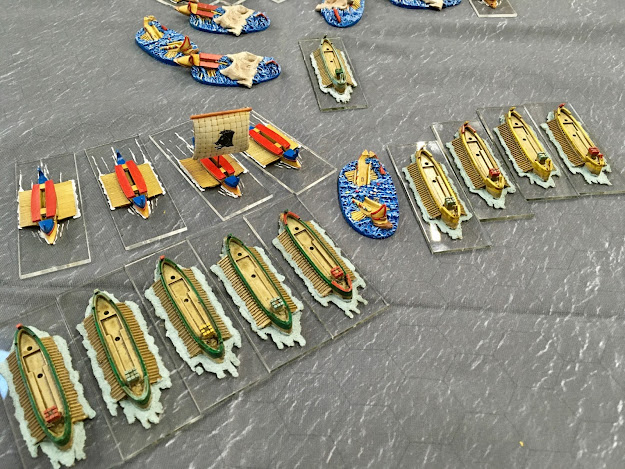 At this point we came to a grinding halt and adjourned outside to sit and discuss our thoughts on the rules (George threatening to dig out his copy of Tony Bath's 1973 galley rules for future games!) 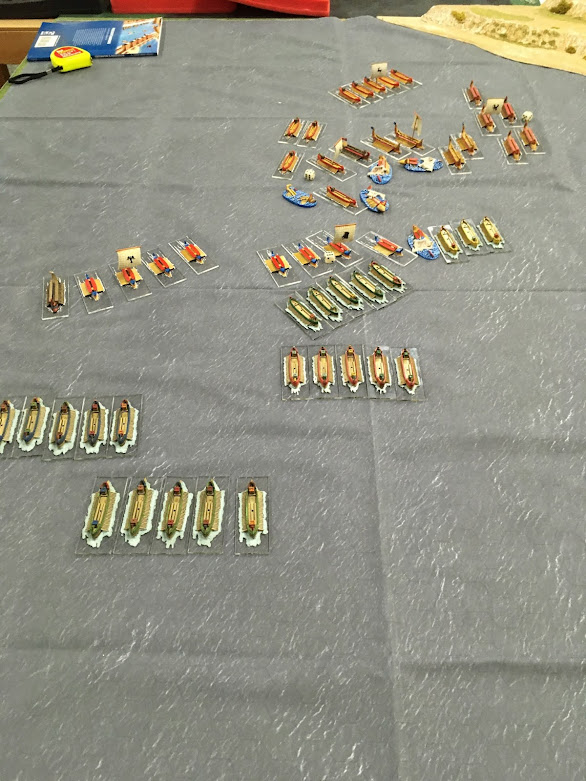 So our first game of Poseidon's Warriors was not what could be claimed to be very successful... We liked the ideas of minimal record keeping and the lack of need to use markers on ships (like Fleet of Battle which we'd looked at and liked the look off apart from the need for damage marker poles) but the simplicity was creating its own problems. Whilst the rules as written would probably work for the bigger ships from the Roman period with more than one hull point etc, the fact a Fast Trireme can be sunk without any dice being rolled seemed very... unwargamey! (we did wonder the play testing had been using the larger later period ships and whether anyone had tried using Biremes and Triremes).
We talked through some ideas to see if the rules were salvageable and will give them a go - these include using the stats of some of the bigger ships (probably the Quinquireme stats), using an attack dice so that contact  doesn't result in an automatic hit/sinking (despite including oar shearing rules we saw no point for them as the game plays), some more thought on formations and spacing, and maybe some drifting rules for static formations.
If that doesn't work we have a pile of other rules to worth through including the afore mention Fleet of Battle and David Manley's Ad Mare Bellum...
Posted by Steve at 13:58:00