After our less than satisfactory try out of Posiedon's Warriors our initial plan was to make some changes and given them another go, but a read through of Long Face Games' Ad Mare Bellum led George and I to decide to given them a try out last night down BIG.

We both went with 20 triremes a side, George deciding his were Phoenicians trained in the school of Manoeuvre tactics, whilst I went with Greeks who emphasised Boarding as their preferred tactics. Adopting a specific school gives you some benefits in Ramming, Boarding etc. As we just wanted to try the rules out we lined up facing each other and started rowing! 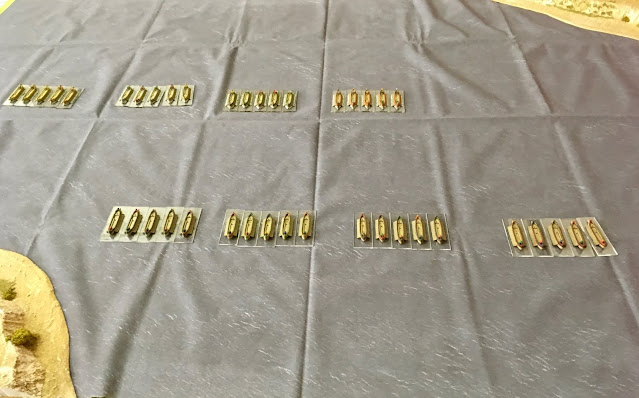 The game turn starts with a Command Phase (which has no relevance at the start) followed by six Action Phases in which you can Move, Shoot, Ram and Board, whose phase being decided by drawing of cards from a deck. I managed to steal a march on George by having two Action Phases in a row so (in the spirit of trying the rules out) I recklessly decided to Ram three of George's galleys head on completely forgetting I should have loosed arrows at them on the way in to try and inflict Crew Casualties on the Phonecians! 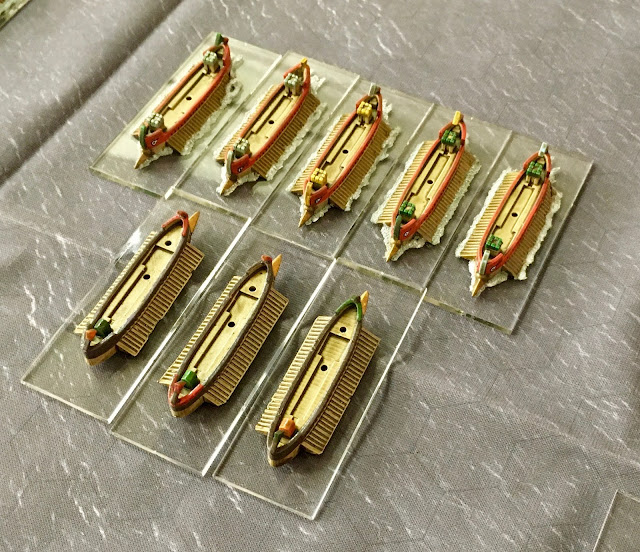 My headlong tactic was not very successful. My first trireme was damaged in the attack (we used silver coins to indicate damaged ships). Even worse my second galley managed to Wreck itself on the ram of its opponent! (we used the TFL shock markers for Wrecked vessels as we didn't have any wreck markers with us). Fortunately the third galley's attack was just ineffective. 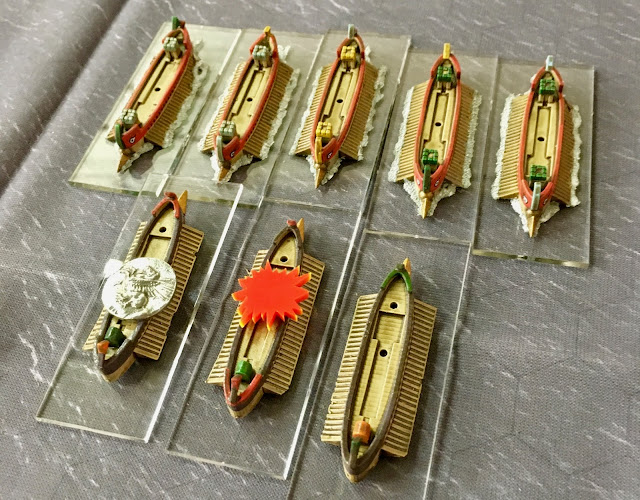 The marines on my damaged trireme decided to try and Board the Phoenician galley and whilst they inflicted a Crew Casualties on them (shown with a gold coin), the action managed to lock the two vessels together! 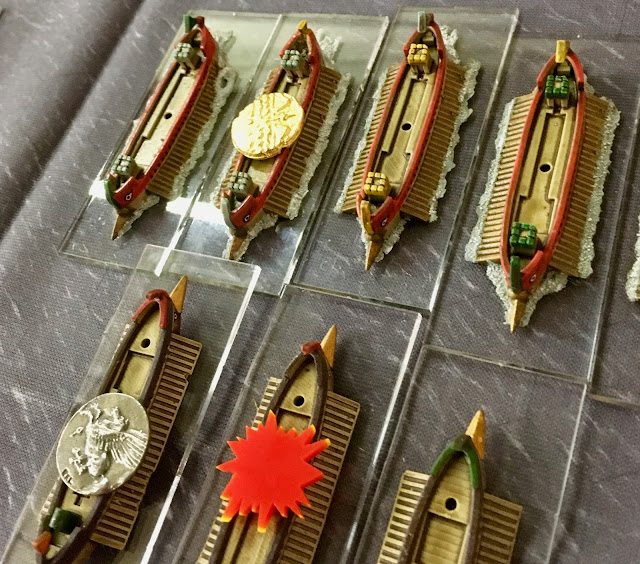 The next Action Phase went George's way and he sailed his two free galleys around the flanks of the three engaged Greek galleys, one ploughing through the gap created in the squadron and into the side of a Greek trireme. 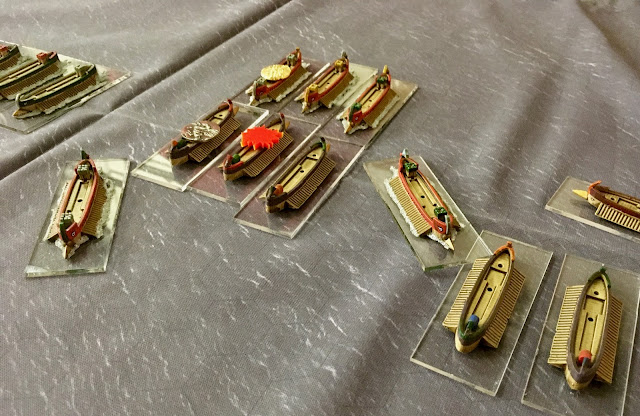 Firing as he went in George inflicted a Crew Casualty on the Greek vessel and Immobilised it with his Ramming attack (indicated by a purple dice). From his locked galley he launched a Boarding action and managed to capture the Greek trireme (we used white dice for this - see next picture).
Fortunately the next Action Phase was mine so I ineffectively loosed arrows at two Phoenician galleys before Ramming into their sides! 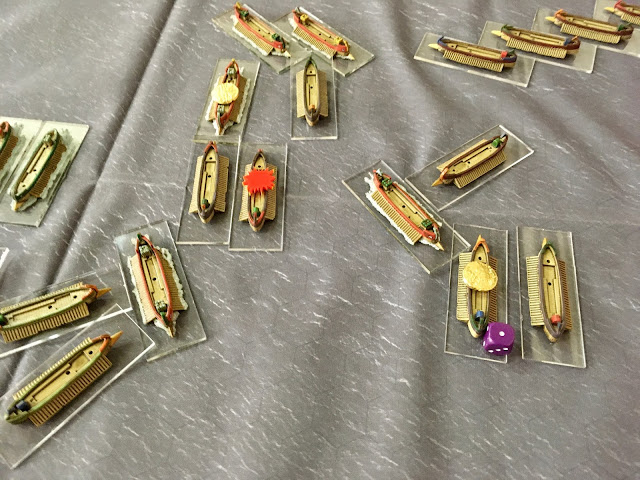 One was Wrecked with a second Damaged and subsequently Captured during a Boarding action. 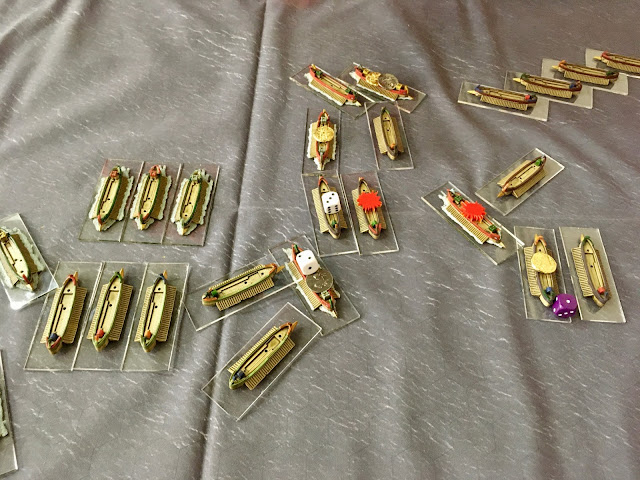 Elsewhere two squadrons of Phoenicians ganged up on an isolated Greek one... 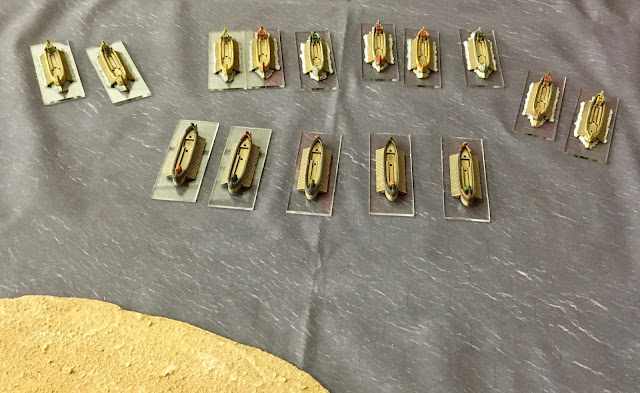 Inflicting Crew Casualties on all but one of the Greek triremes before Ramming them! 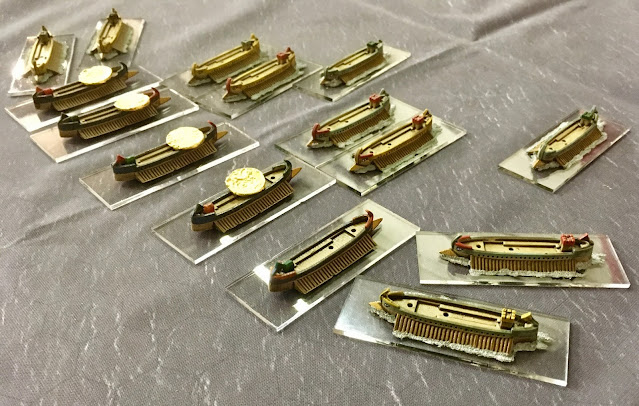 The two Greek galleys hit in the side were immobilised, but of the three rammed head on, only one took any Damage, three of the attacking Phoenician triremes themselves being Damaged themselves in their attack! 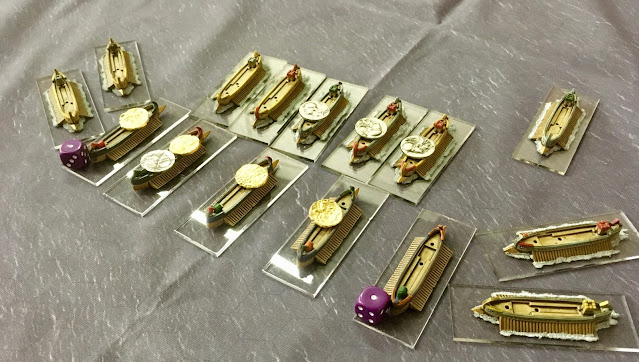 George then attempted to Board the Greek galleys, managing to capture one of the Immobilised vessels but saw one of his attacking triremes captured as the boarders were repelled and their ship counter-attacked and overrun! 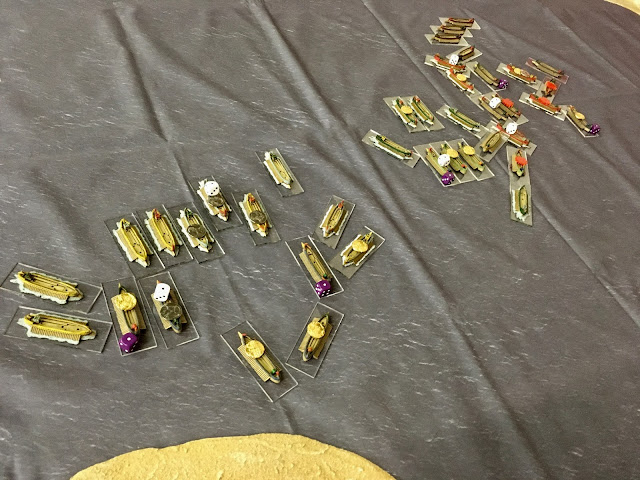 The main battle saw more triremes captured and immobilised with the Phoenicians now catching some Greek galleys in the rear. 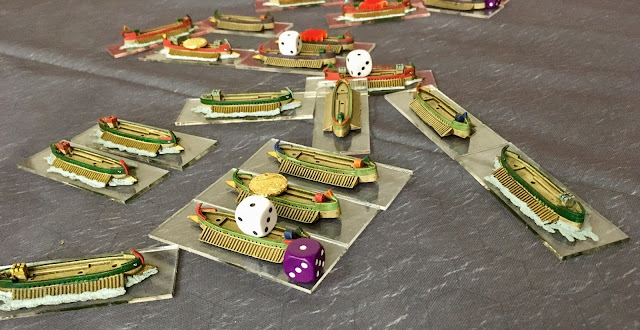 In one memorable phase a Damaged Phoenician trireme with Crew Casualties (who George named the Ship of Death) managed to ram a Greek galley in the side and Wreck it! 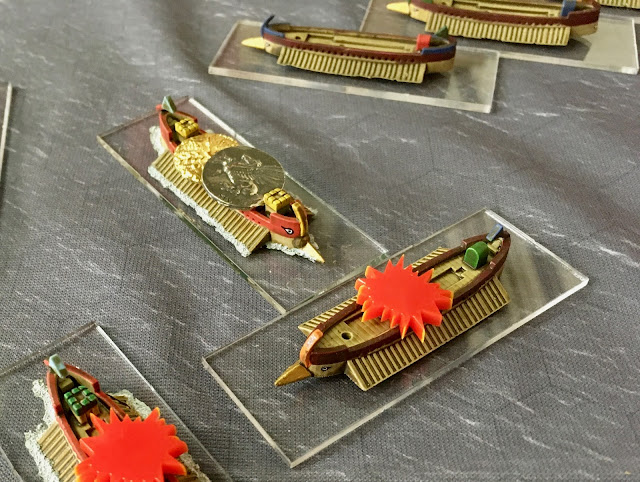 Another wave of Phoenician attacks saw the Greeks suffer more casualties and after two full turns we decided to call it a night.

By the end of the game the Greeks had seen six of their galleys sunk, five captured and one immobilised whilst the Phoenician fleet had seen two triremes sunk and five captured. Overall a victory for the pesky Phoenicians!

So how did this compare to our experience with Poseidon's Warriors? Much, much better. The Ad Mare Bellum rules have a little more record keeping but nothing too onerous and there were no automatic sinking results with no dice rolling which I still maintain is wrong in a wargame! Ramming atempts here had the possibility of failing or causing different degrees of impact. The game proceeded at pace, we were both fully engaged throughout and most importantly, whilst, like with the Mersey Osprey rules, odd rules like the ease ships took Crew Casualties seemed too effective at the time, the actual effect that had and the end result felt "right". We need to sort out some better markers and get some decent wrecked markers made but I think we have found our rules and would recommend them to anyone looking for a fast play Ancient Galley wargame.