All these The Men That Would Be Kings games have led to both George and I looking at conflicts beyond the Sudan we may have figures for, hiding in Lead and Plastic Mountain... For me this means  the French in Dahomey, the Maximillian Affair and, of course, the Zulu War.

The latter is next on the agenda as George has a box of Perry Miniatures British Infantry and I have rather a lot of sprues of Warlord's Zulus bought a few years back for (stalled) project based around David Bickley's Washing The Spears rules.

Over the weekend I dug out my boxes of Zulus and put some thought to using them in TMWWBK but still keeping them useable for Washing The Spears. To this end I have decided that I will form them into 32 man regiments for Washing The Spears and then split the regiments in two to make 16 man Tribal Infantry units for TMWWBK. As the latter requires casualty removal I will mounting the models individually and using sabot bases (yes, the approach I discarded four years ago and now have 60 painted Zulus on 80x40mm bases!).

So, after a couple of evenings of snipping and gluing I have now stuck together three Washing The Spears regiments of Zulus, which gives me six TMWWBK Tribal Infantry units, a 24 point Field Force (or should we call that a 24 point Impi?) 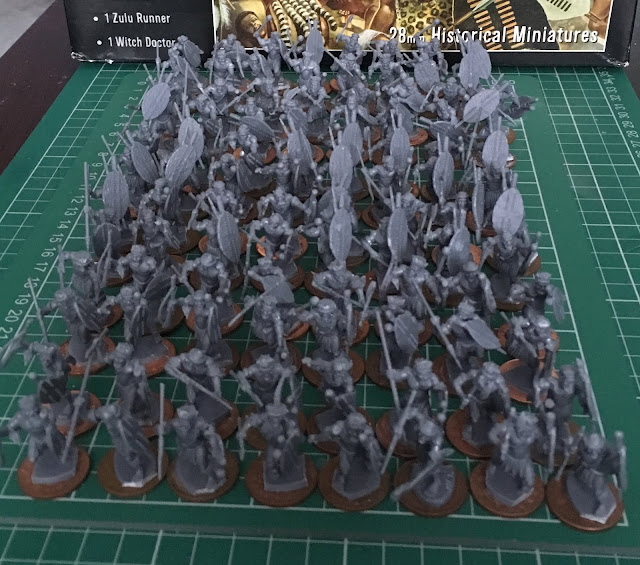 Unlike my Sudan/NWF British infantry, I have mounted the Zulus on one pence pieces as, having seem George do this with his Mahdists, it gives the Tribal Infantry more of a massed effect. I just need to buy some sabot bases from Warbases now and dig out that can of brown spray paint...

Email ThisBlogThis!Share to TwitterShare to FacebookShare to Pinterest
Labels: Colonial wargaming, The Men Who Would Be Kings, Washing The Spears, Zulu War