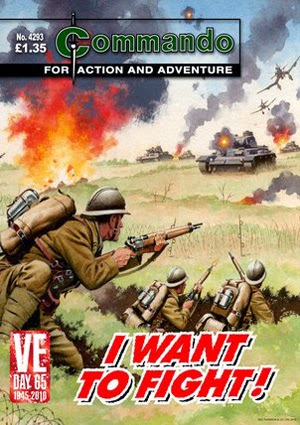 Interesting news yesterday from Osprey, in that they are going into partnership with Commando comic books to produce "eight new graphic war novels consisting of an original, fictional, comic strip of 84 pages coupled with detailed historical information describing the featured conflict, campaign and combatants."

According to Osprey's MD "This new collaboration brings together the story-telling expertise of Commando and the historical authority of Osprey". Well I might agree with the latter, I'm not sure about the former. As a kid I would pick up the odd Commando issue, normally second hand, but as a general rule found the stories lacking compared to the strips in the likes of Battle and Warlord. Part of this was obviously down to character familiarity, but the style and story telling in Commando, with odd exceptions, never matchd the weekly comics.

It will be interesting to see what this collaboration brings, after all Garth Ennis recently wrote some excellent WW2 stories in his War Stories and Battlefields series' but this new venture's success will depend on the qualities of the writers and artists involved.
Posted by Steve at 21:02:00