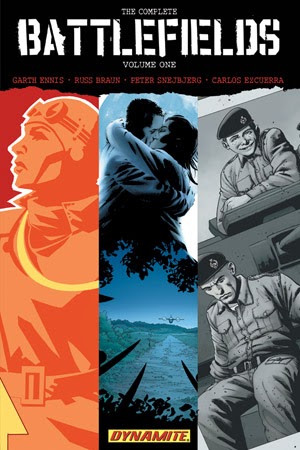 When I posted about Osprey's planned foray into the world of comics, I mentioned Garth Ennis recent War Stories and Battlefields series. It was only later that I realised i had only read the War Stories comics and not the Battlefields ones, so quickly popped an order off to Amazon for the first of the three collections of stories.

I must say the three collected stories in the volume one are all excellent stories and superbly illustrated by three different artists. Ennis certainly doesn't pull his punches in describing the horrors of war and these are certainly not kids comics.

The three stories are The Night Witches, the story of Soviet female aviators in the Great Patriotic War, The Tankies, a story of a novice British tank crew in Normandy and Dear Billy. The latter is an incredibly moving story of a young nurse in the Far East and her traumatic experiences. All three of the stories had a cinematic quality to them, but Dear Billy would make for a great film.

Wargamers will get a lot out of The Night Witches and Tankies, but all three stories are excellent and Battlefields volume one is well worth getting hold of...
Posted by Steve at 19:38:00