A comment on the Brigade Message Board led to a bit of idle reminiscing last night about my first ever proper wargames army - a 1/300th 1944 US Armoured Division (the imaginary 38th Armored Division, nicknamed "The Reaper"). Not much has survived various house moves (or if it has it is hiding) but I did find a pile of models a while back, veterans of many a teenage battle in Graham's garage against Simon's 1:1 panzer division (well that was his ambition, not sure if he ever got there but Graham's Brits and my Yanks had to combine to give him a game). 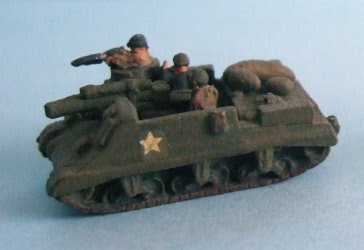 Most of the division was made up of Heroics and Ros miniatures, but I was never really very happy with the clean look of the models. Everyone knows that US armoured units of the late war looked like refugee caravans (!), so many models (like the M3A1 half track and M7 Priest here) got covered in packs and rolls made out of Milliput and had crews added, mainly from the US heavy weapons pack. 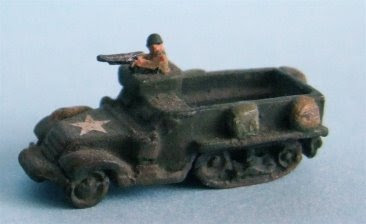 Additionally the green models on green table look was kind of boring so a number of tanks (like this Skytrex M26 Pershing - well I had to have something to take on the King Tigers!) had orange air recognition panels fitted from old toothpaste tube (this was in the days when they were usefully made of metal). 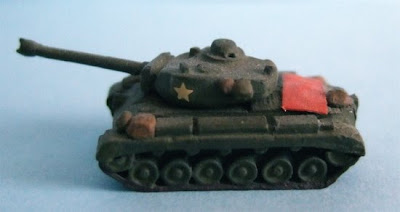 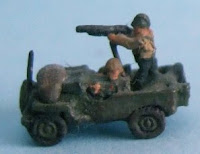 As the division expanded I started to get ambitious and decided the H&R jeeps looked like they had just left the production line or were driven by some REMF not a frontline recon unit, so I converted a number to having the windscreen down, a wirecutter bar fitted, a crewman with .50 cal mg (actually its a BAR but in this scale...) and lots of packs and rolls. 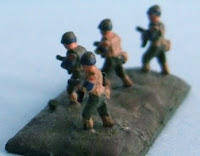 I realised it was all getting too silly when I converted a platoon of US infantry into MP's by removing their packs (in 6mm...) and painting blue MP armbands and rings around their helmets on them... (this was for a planned but never fought Battle of the Bulge game).
These lads haven't seen action for over twenty years and are starting to go slightly yellow due to the Humbrol varnish used but they hold fond memories of many a battle fought including one epic D-Day battle that last two days and we never really got off the beach (on Simon's lounge floor).
Posted by Steve at 12:11:00