Back to gluing my fingers together again today with more WWI aeroplanes, but not until I'd given 50 golf balls the benefit of my 30 minutes of tuition and found my back didn't hurt anywhere near as much this time. Some of the balls even went a reasonable distance and were straight - Tiger Woods watch out! :-) 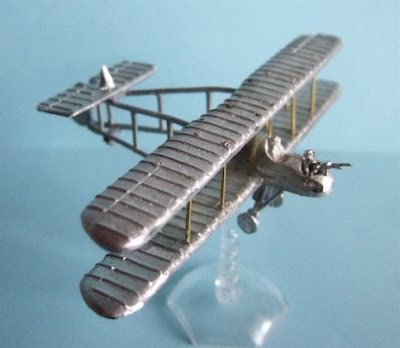 Anyhow, back to the sane hobby and the continuation of building up a load of models for AirWar: 1918. I finished one Skytrex F.E.2b Gunbus and two Skytrex R.E.8 (Harry Tate)'s today and was quite pleased in that they were not as much of a sod to put together as the S.E.5a's had been.
The Gunbus is one of my favourite WWI models and although obsolete by 1916 one was involved in the dogfight that killed Max Immelmann (the British say a Gunbus shot him down, the Germans say he shot his own propellor off!). I am toying with painting it up as a night bomber with black upper surfaces as unfortunately the British showed a distinct lack of imagination in WWI when it came to aeroplane painting and almost all are painted PC10 Green/Brown. The model is impressive with a 10cm wingspan (compared to the S.E.5a's of 5.5cm) and went together ok, but the instructions by Skytrex are complete rubbish and I had to resort to looking on the internet as to how it should be put together. 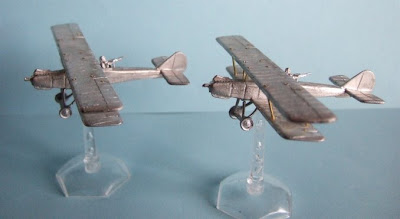 The R.E.8's were much simpler jobs and are useful models for WWI gaming and beyond, indeed I have started re-reading The Day We Almost Bombed Moscow which starts with 'Z' Flight's aborted mission to bomb the Bolshevik capital with two Harry Tate's (serving with White Russian forces).
The immediate post-armistice situation on the Eastern Front is quite fascinating (and chaotic) with British, French and German aeroplanes flying side by side in the fledgling new air forces arising from the collapse of the Russian and Austro-Hungarian Empires. More on this when I start painting as I am planning to paint some planes up for post-war actions...
Posted by Steve at 15:30:00