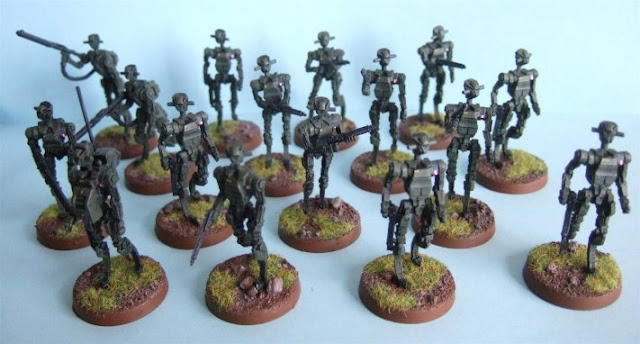 Taking a break from gluing my fingers to white metal biplanes I finally finished the outstanding Victory Force SAYTR robots. As stated I had decided that the models would be earmarked for battlefield use, namely a set of 15/28mm SF rules which I am (intermittently) working on, using the Iron Cow background and based on the ColdWar: 1983 system which will be called Iron Dog: 2136AD.

The American Republic is a military-industrial dictatorship which controls most of the eastern seaboard of continental America. However due to the fall out from the Second Secessionist War and the ecological disaster that has turned the old Central US into a huge dustbowl, the Republic's population is restricted by the need to match limited food resources. From a military viewpoint this means that the AmRep military has to look at more automated systems than the other world powers and this has resulted in the introduction of robotic infantry - the A.I.'s - onto the 22nd century battlefield.
Whilst I like the Terminator style of Copplestone and em-4 and had intended to use them for the A.I., I was immediately taken with the Victory Force SAYTR's when I saw them on TMP and sent off an order to the States.

My initial reaction upon opening the order when it arrived as less favourable as the models are very flat and had a lot of excess metal from the moulding process that needed careful removal. However this wasn't as bad a job as I initially thought and the very flatness of the designs allowed for a fair degree of variation to be built into the models as they can be quite easily be bent at the knees and elbows and their light weight means one leg can be snipped from the base and adjusted to suggest movement.
I decided on fire teams of four and a platoon of three fire teams and one command team. The command team is slightly less animated and I converted one model into a radio operator with a spare plastic piece from a space marine sprue and a wire aerial. 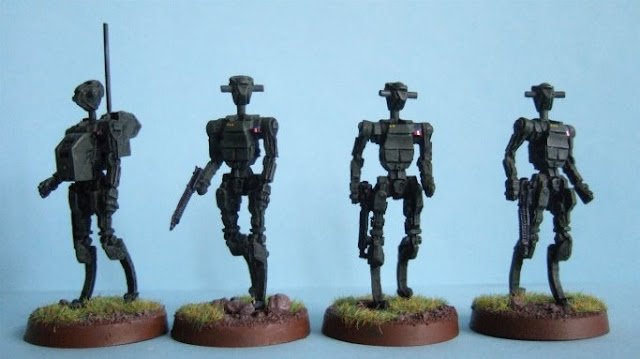 Overall I'm very pleased with these and how they turned out, I decided on a one colour green scheme with some small national and rank markings (do robots have a rank structure?). I just need to find some suitable human grunts to support them - umm... that Pig Iron range looks really nice...
Posted by Steve at 16:27:00