Seven Days To The River Rhine: O! The Horror That The Enemy Shall Suffer...

With lives ready for sacrifice.

O! the horror that the enemy shall suffer,

From you in the fire of the battlefield.

Recently George expressed an interest in Great Escape Games' Seven Days To The River Rhine (7DTTRR), obviously on the look out to find another game with which to beat me on the battlefield! Using my 6mm October War collection, Andy kindly agreed to umpire the Breakthrough scenario from the rulebook to introduce George to the basics of the rules set... 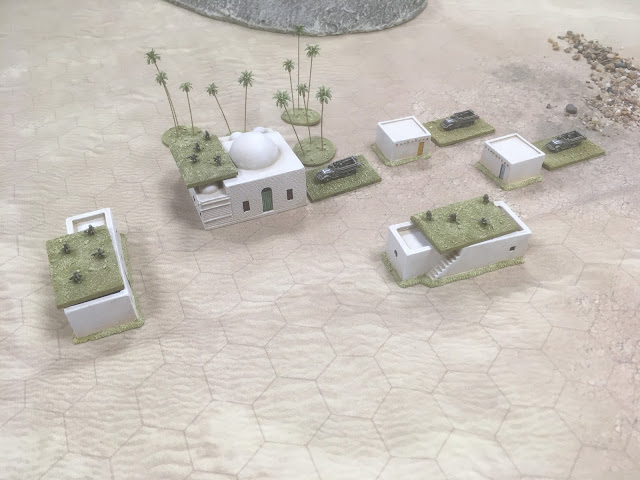 The Israelis held a small village in the Sinai with an infantry platoon, George deploying his company of Sho't (Centurions) in two lines to deal with the advancing enemy armour. 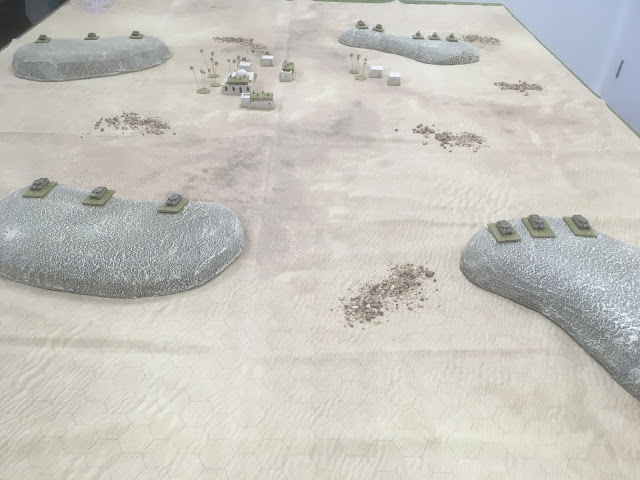 Out of the desert haze two Egyptian T-62 companies appear with BRDM support. 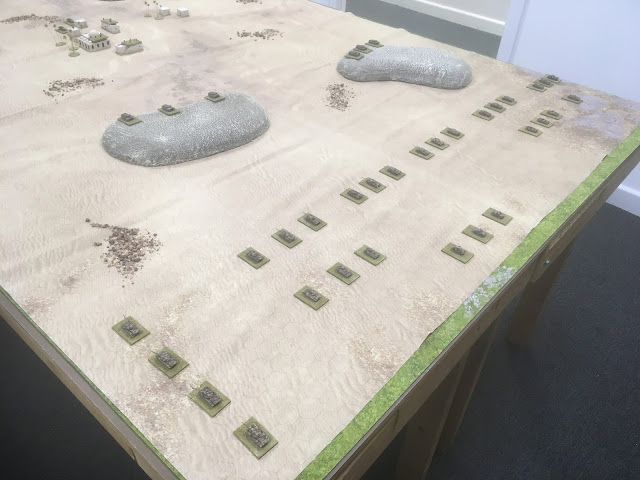 Unfortunately I'd left my bag of tiddlywinks at home so I had to use dice to indicate when I'd activated a unit which doesn't look as good (though these yellow dice looked good for morale markers in subsequent game).
Following Soviet doctrine, the Egyptians pushed directly forward towards the waiting Israelis... 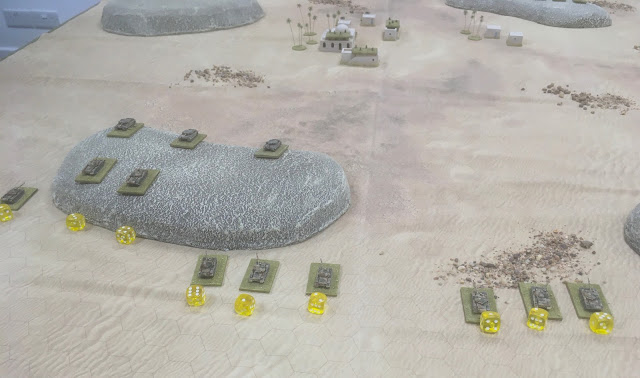 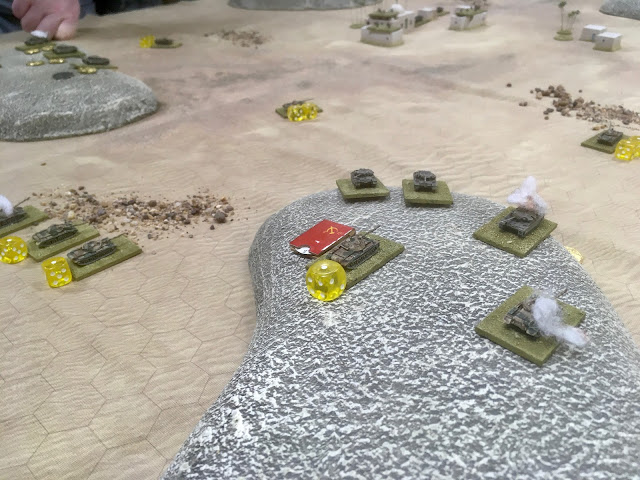 However Egyptian return fire took out two of the Israeli tanks and in the centre two platoons pushed through the first line of Sho'ts towards the objective... 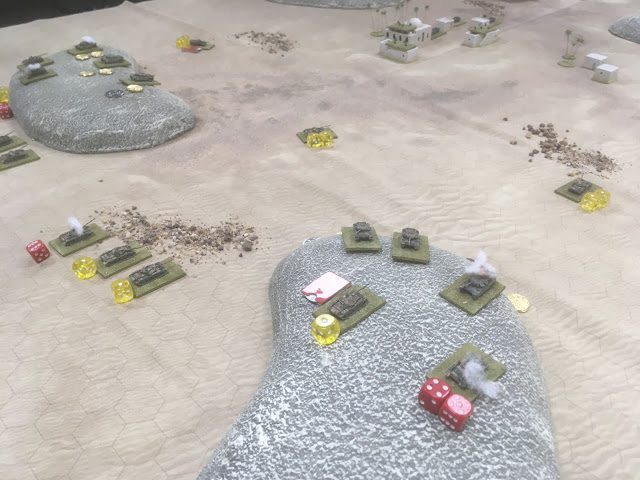 Unfortunately this bold move fared badly with three T-62's blow up and the sole survivor taking a hit of their morale. 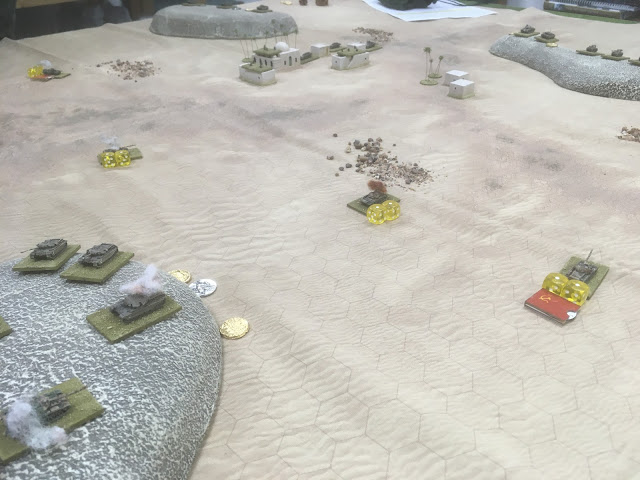 Time to deploy the Egyptians "secret" weapon - a platoon of BRDM-2's with AT-3 Saggers! Fire!! 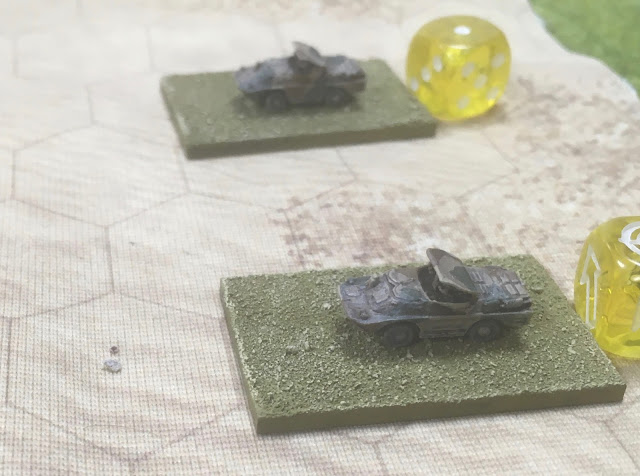 The sole IDF Magach exploded! (we were short a Sho't so my Magach conversion was drafted into the Israeli tank company - though it didn't last long or get to fire!). 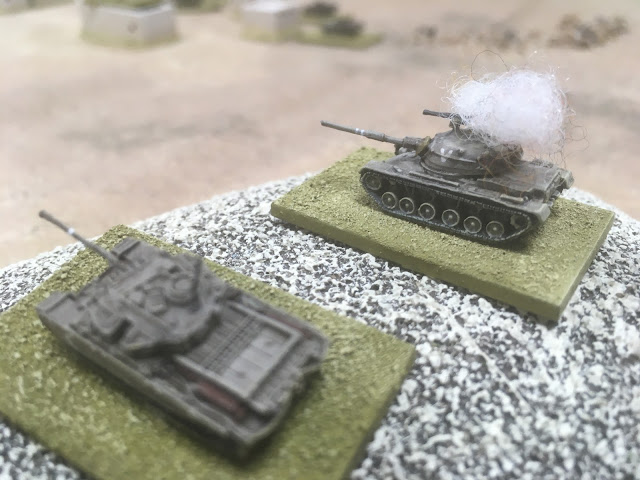 Unfortunately Israeli return fire was quick and effective with one of the Sagger BRDM's blown up and another taking morale impact. 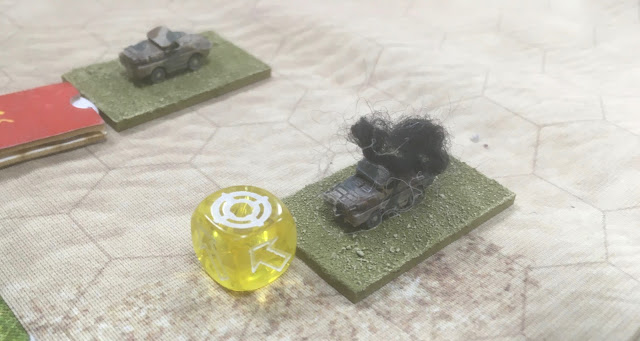 However the numbers were starting to work in the Egyptians favour as the first line of Sho'ts fell to 115mm cannon fire. 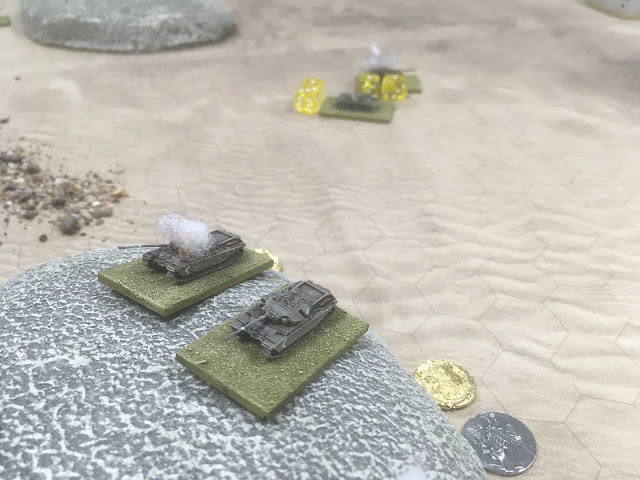 And the second wave of T-62's pushed through the centre and around the left flank. 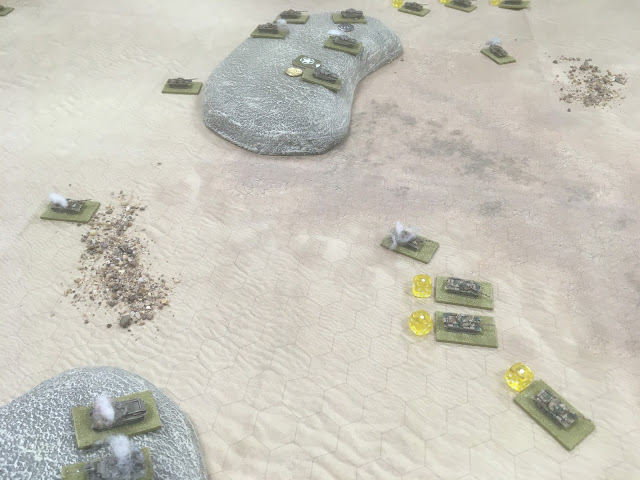 Again the Israeli defensive fire in the centre was devastating with another T-62 platoon virtually destroyed. 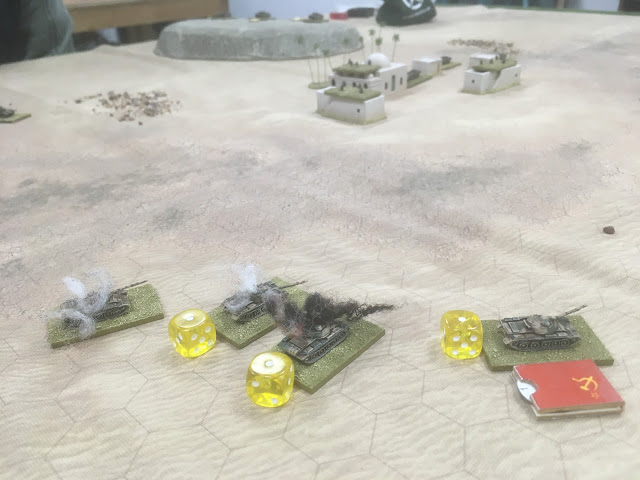 Starting to run out of tanks the Egyptians moved forward their mechanised infantry in their BMP-1's. Armed with one Sagger each they fired at the Israeli second tank line... 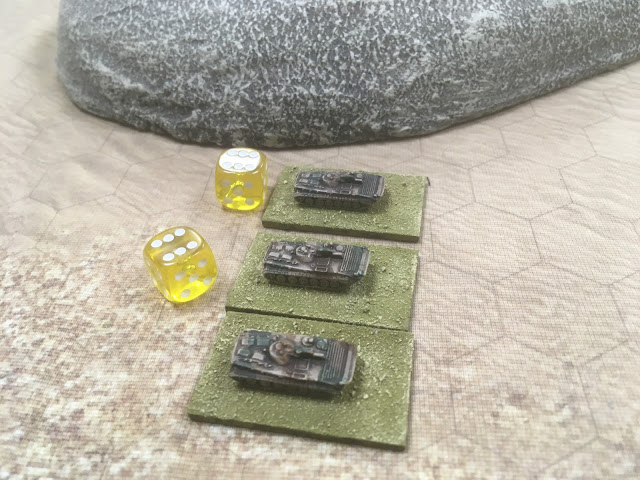 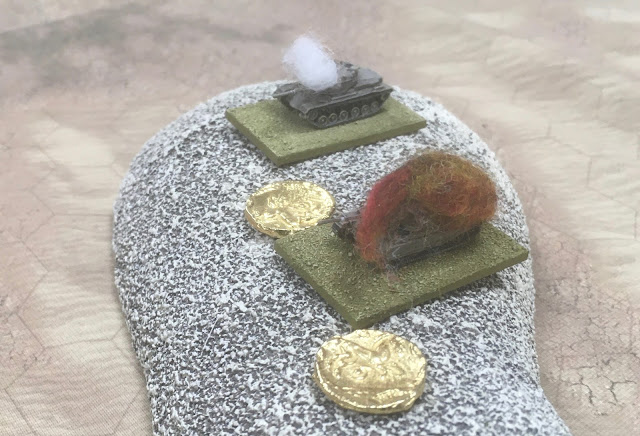 Whilst the centre of the battlefield was looking like a graveyard of T-62's... 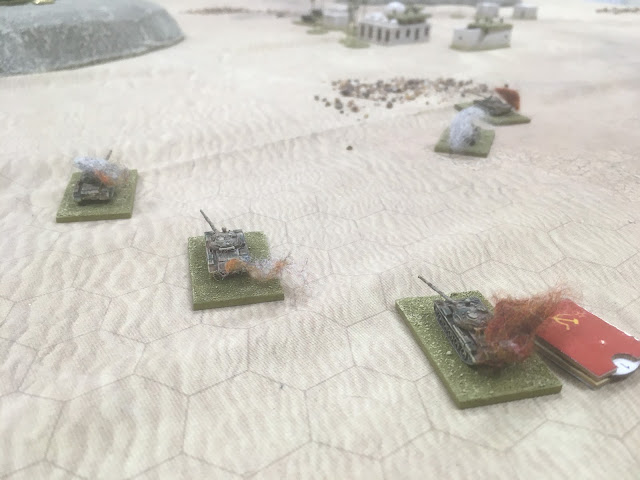 The Egyptians had more success of the flanks, with the armour on their right moving rapidly into the Israeli rear and shooting up a platoon of AMX-13 light tanks... 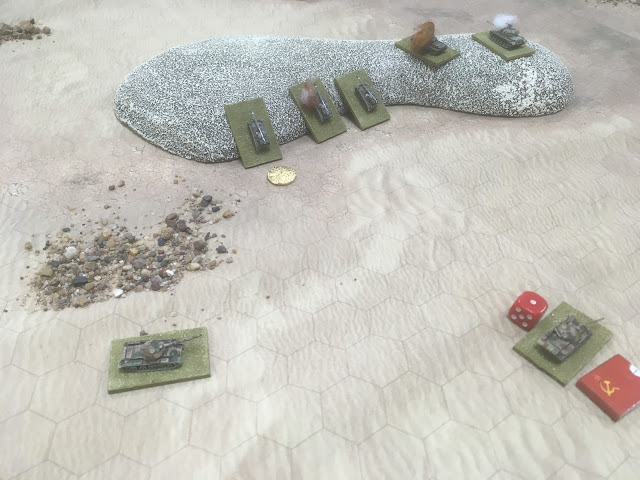 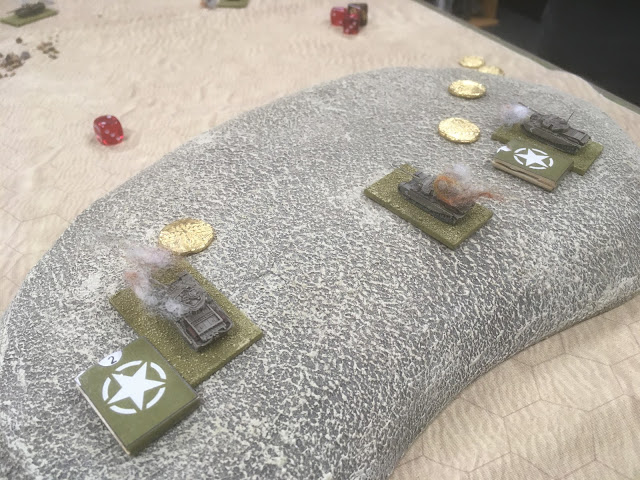 Nearing the occupied village, two sections of Egyptian infantry de-bussed from their BMP-1's. Whilst one of their comrades, clearly inspired by the T-62's, fired his 73mm cannon into the rear of the an AMX-13 blowing it up. 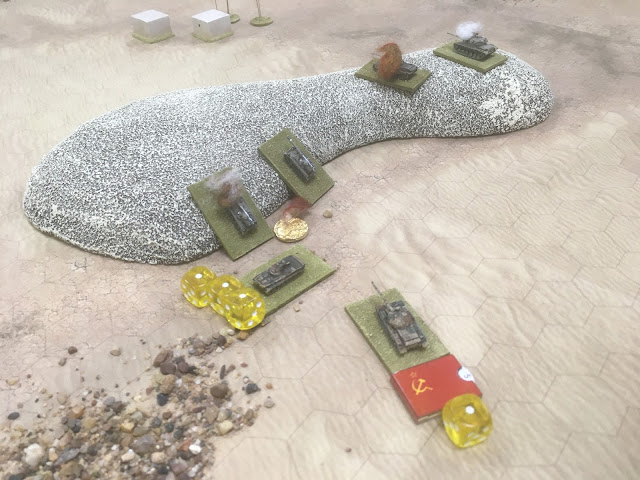 At this point with just one AMX and the infantry platoon in the village, George conceded and the Israelis surrendered. 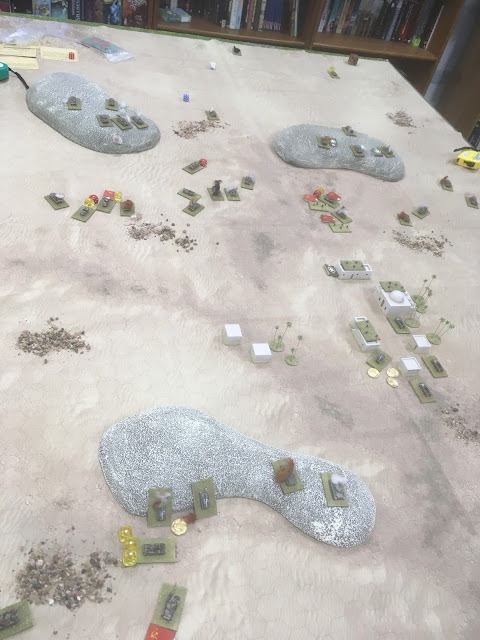 As an introductory game this wasn't too bad. To allow George to get a handle on the basic mechanisms of 7DTTRR in his first game we left out Break Points (which may have stopped the Egyptians looking at the T-62 losses) and the Tactical Advantage Cards (which add more colour to the system), but the end result was a reasonable facsimile of the early days to the October War when the IDF struggled against the overwhelming numbers of Arab armour without air force support.
Posted by Steve at 10:51:00