With the Sharp Practice 'En Avant' event at BIG rapidly advancing up the calendar, Andy kindly agreed to my suggestion to transfer our battles from the American colonies to the Peninsular so I could get some experience commanding my newly raised Kingdom of Italy force. To this end we agreed to try out the Rescue Mission scenario from the rulebook, Andy's Spanish trying to recover a captured spy from my Italians.

The scenario starts with the spy being held in a small isolated farm house by a group of Italian Fucilieri under the command of Sergente Bergomi... 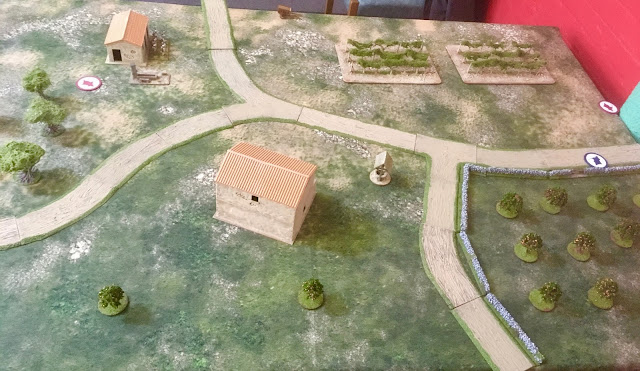 Unfortunately for Bergomi the Spanish had dispatched a rescue party and Capitán Miguel Manzanas suddenly appeared with three groups of Fusileros from the woods! 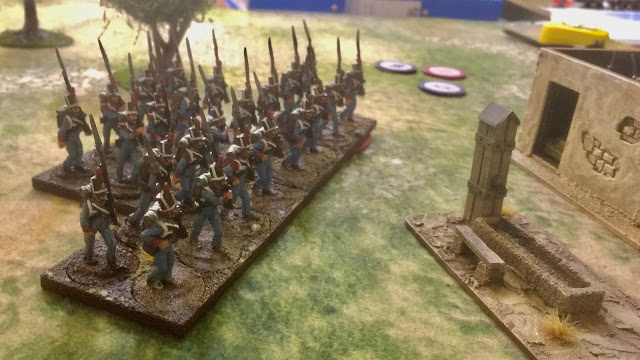 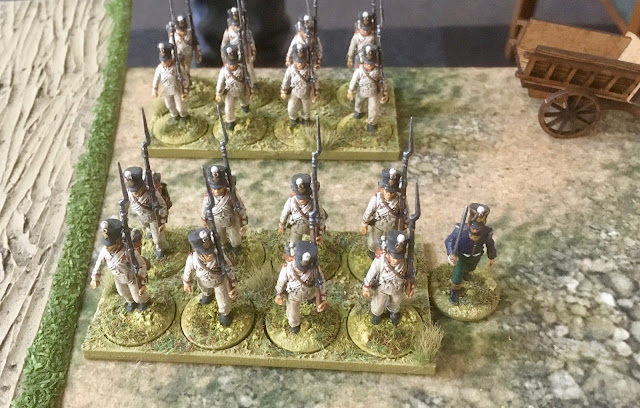 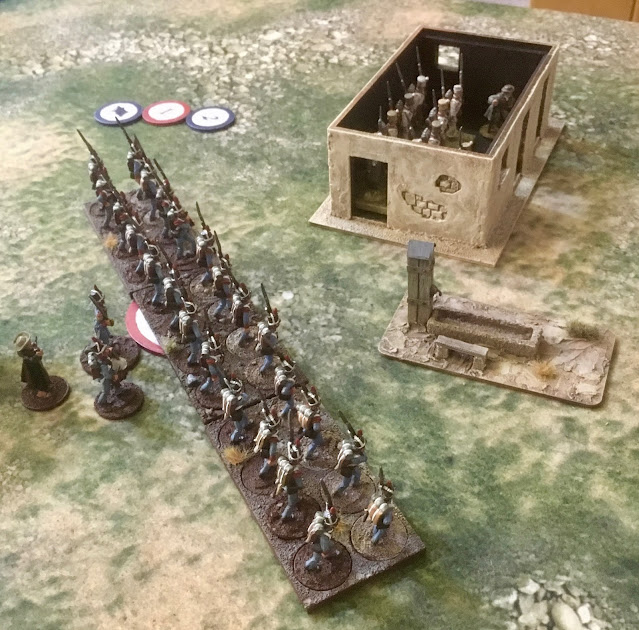 But Conti reacts first forming his Fucilieri into line and pouring a volley of musket fire into the Spanish! 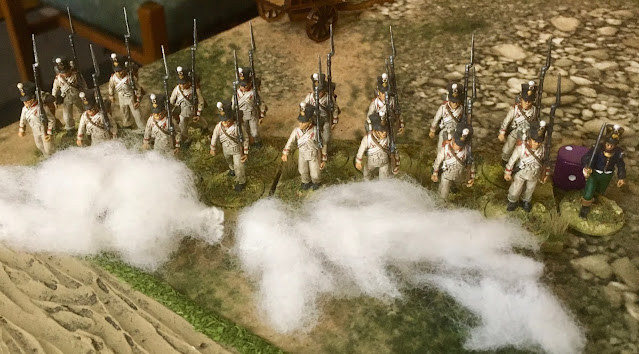 Two Spaniards fall dead and the Fusileros take some Shock. 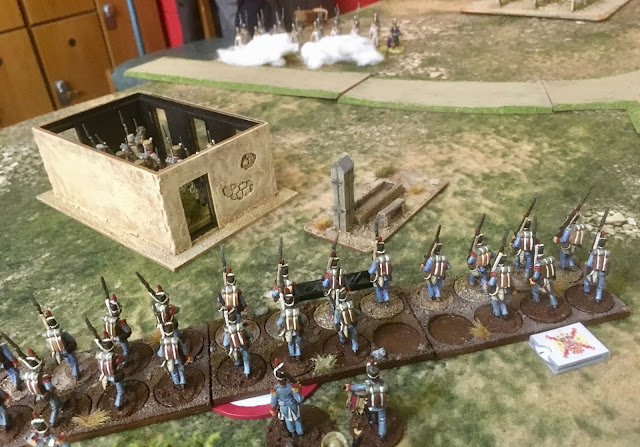 Across the field of battle Andy deploys Sargente Estreñido and his cannon which opened fire on the farmhouse where the captured spy is held! 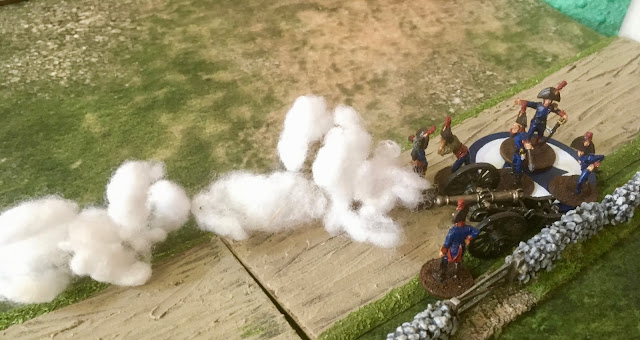 The round shot crashed into the building, Bergomi's men taking two points of Shock! 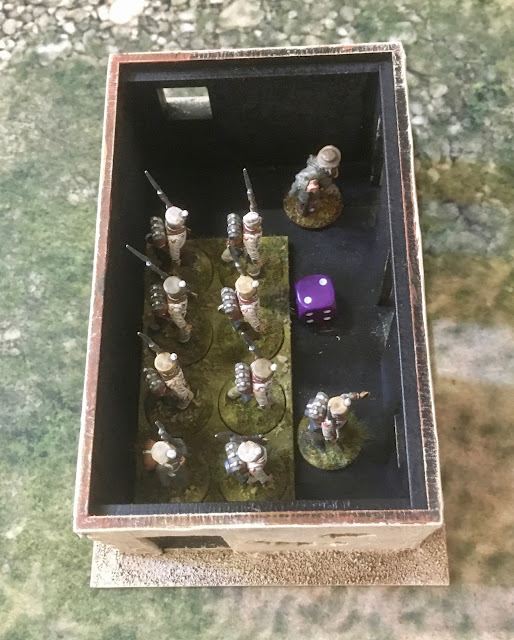 Meanwhile Teniente Ramon Estiércol and two groups of Cazadore skirmishers arrived and started to move through the vineyards towards the Italian deployment point... 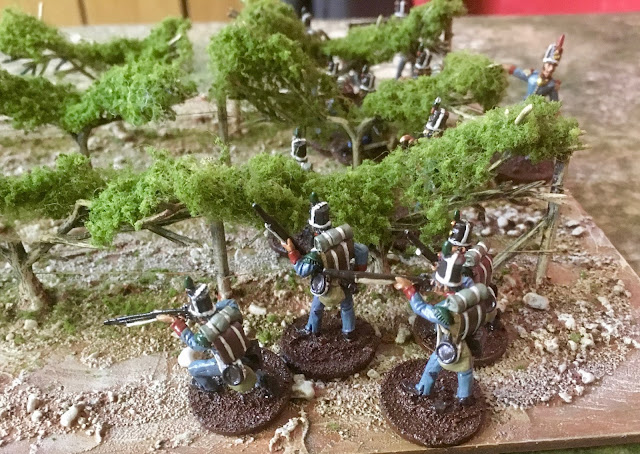 To be faced by Corporale Collovati and a group of Volteggiatori skirmishers... 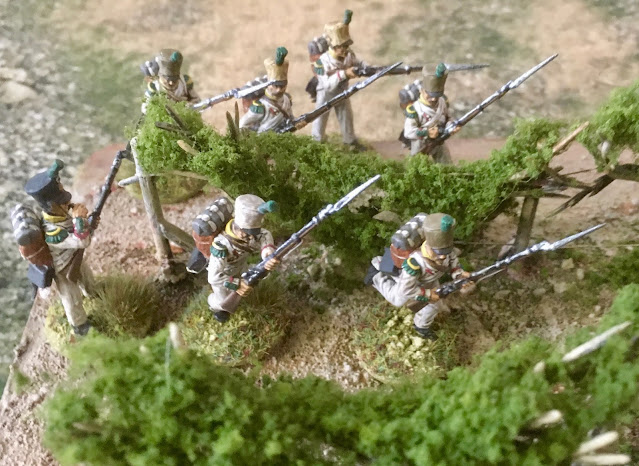 ...who immediately open fire on the Cazadores! 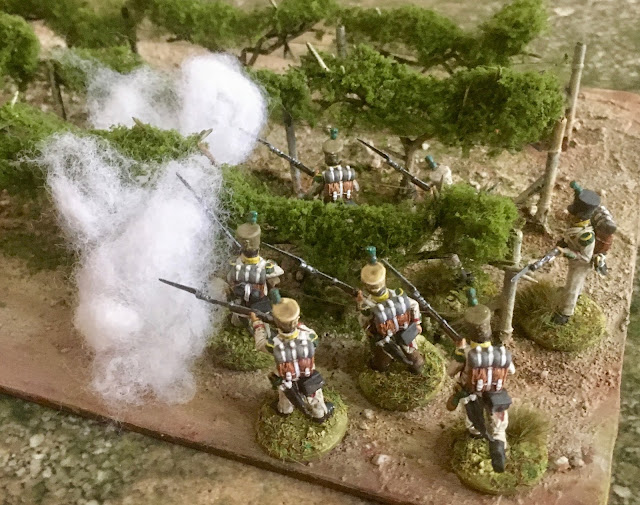 Support soon arrived with another group of Volteggiatori under the command of Primo Corporale Zoff to stand against the Cazadores. 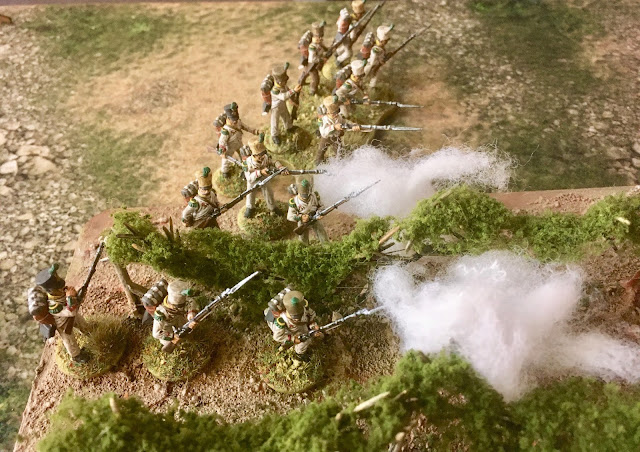 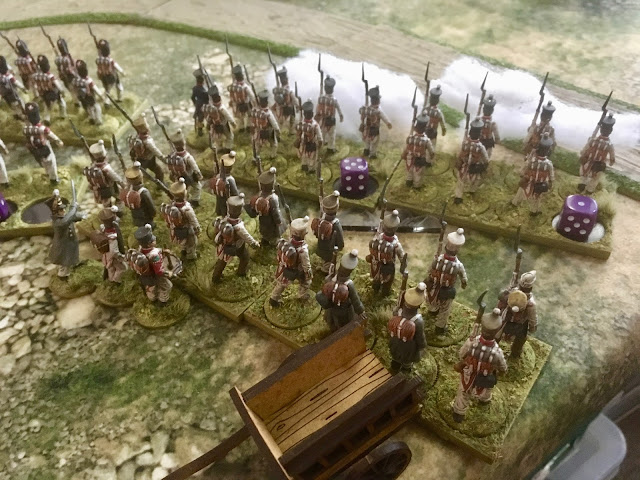 The brave Conti orders his Granatieri forward employing the Al Doppio (Pas de Charge) characteristic and charging into the Spanish Fusileros despite suffering from a lack of water (indicated by the blue die) from a previous random movement event which resulted in them to be Sputare Piume (Spitting Feathers)! 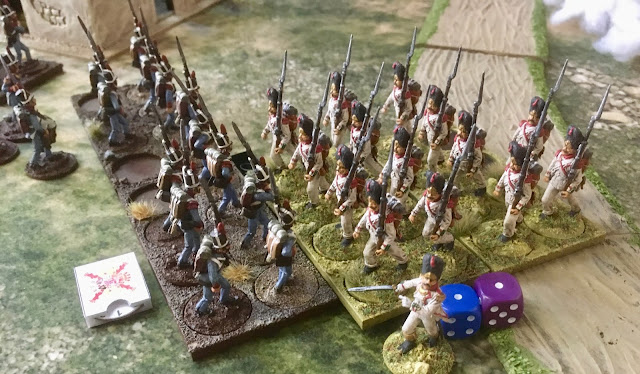 The Granatieri crashed into the Fusileros breaking one group and forcing the supporting one back! Unfortunately this did not come without some cost with seven brave men of Italy falling to the Spanish bayonets and Tenente Conti being knocked to the ground! 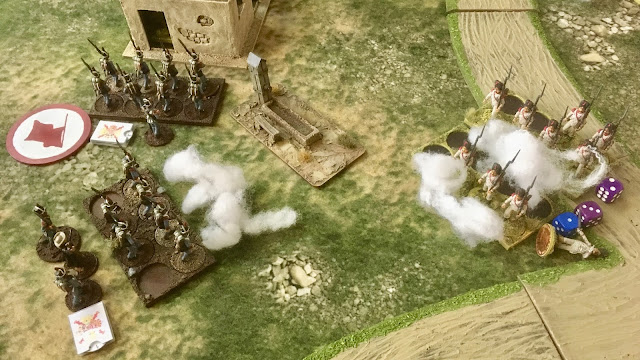 Capitaino Rossi deploys his Fisica (Physic) who runs across the battlefield to treat the stunned Tenente. 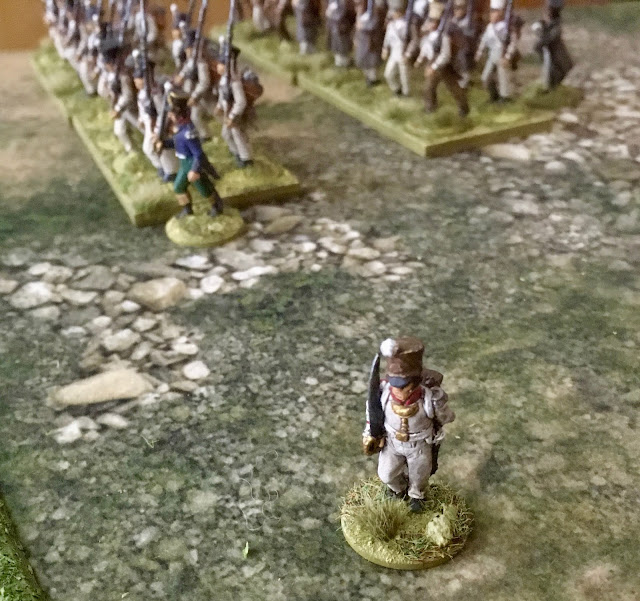 Who after a dab with the magic sponge consolidates his Granatieri into one group. 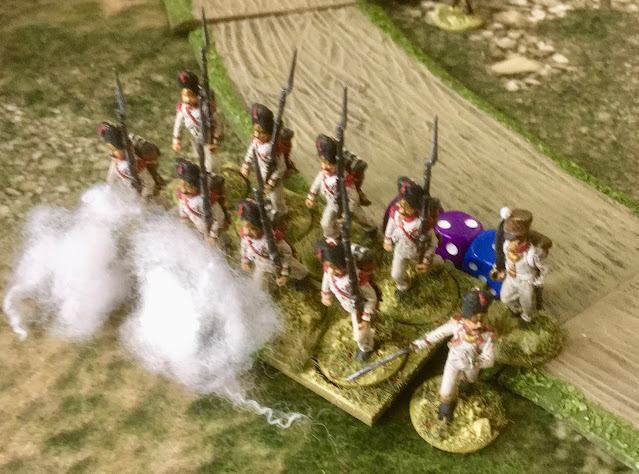 Meanwhile Capitaino Rossi moves his Fucilieri across the battlefield to cut off any escape route Capitán Manzanas may be considering... 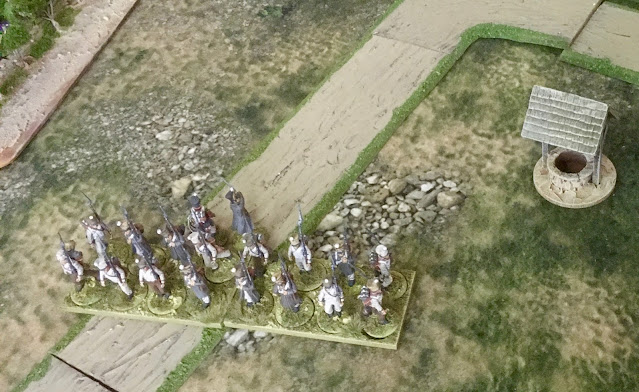 Unfortunately this was not what Manzanas was planning and he reforms his two remaining groups Fusileros and fires into the remaining Granatieri! 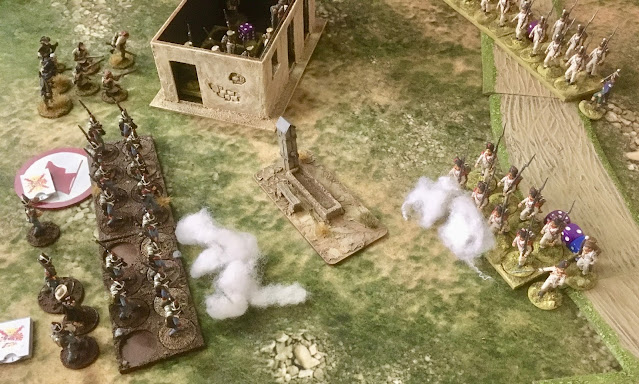 Who break having left another four of their comrades dead on the battlefield. 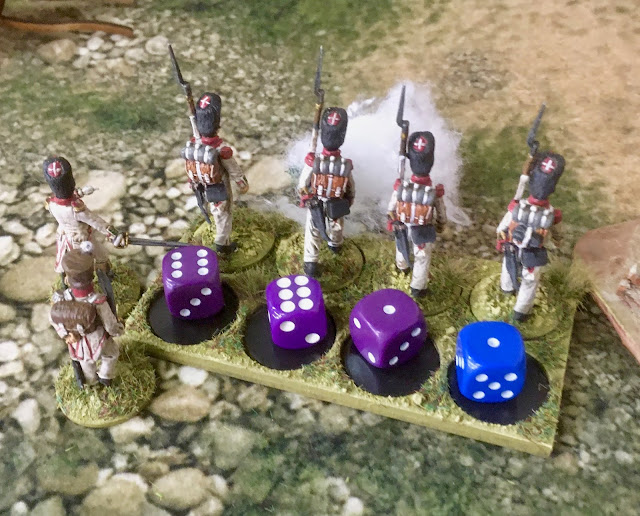 Having been pouring musket fire into the farmhouse for most of the battle killing and piling Shock on Sergente Bergomi and his men, Andy then lets loose the dreaded "El Víbora" and his Guerrillas on the poor Italians. Five fall dead and the sole surviving Fucilieri breaks dragging the unconscious Sergente Bergomi with him. 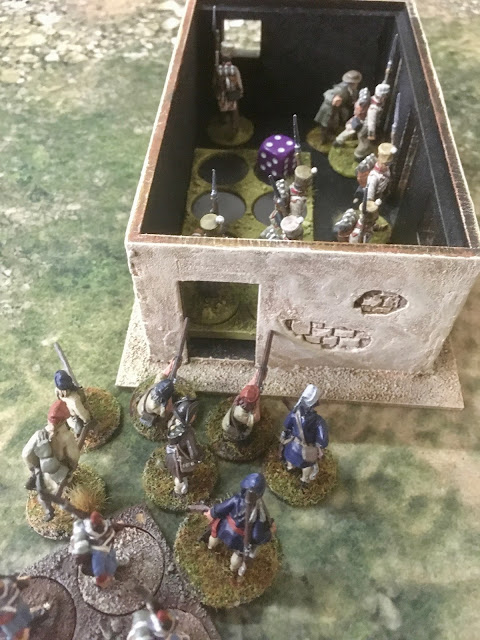 The Italian Force Morale was starting to look worrying and the Spanish had rescued their spy... but could they get him to safety? 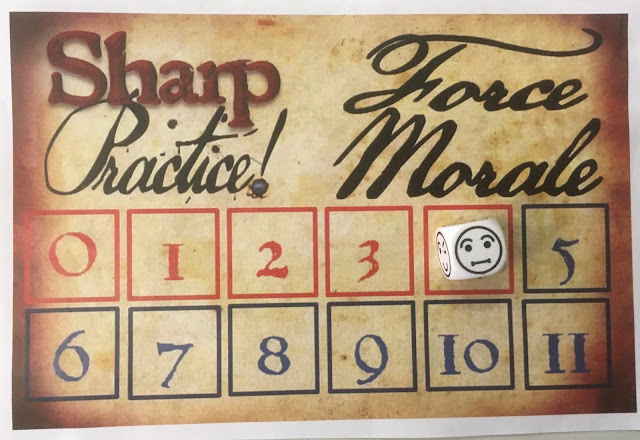 Tenente Conti advances his Fucilieri conscripts at the farmhouse in a brave attempt to recapture the spy, but their charge comes up short... 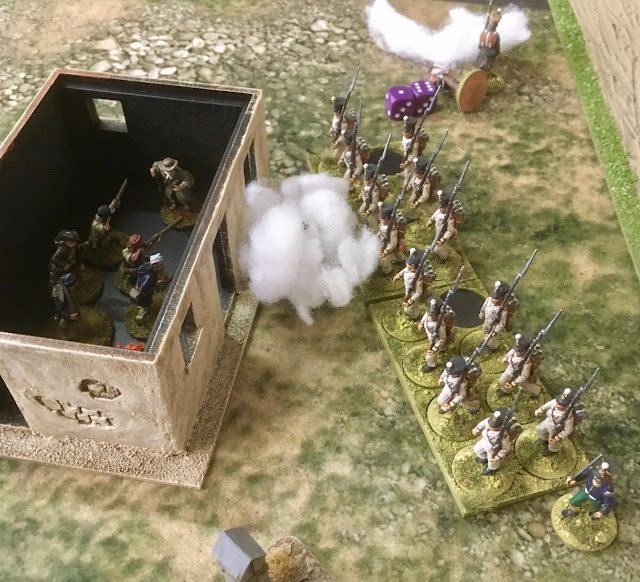 Typical of his ilk"El Víbora" and his Guerrillas flee the building and hide behind the Fusileros... 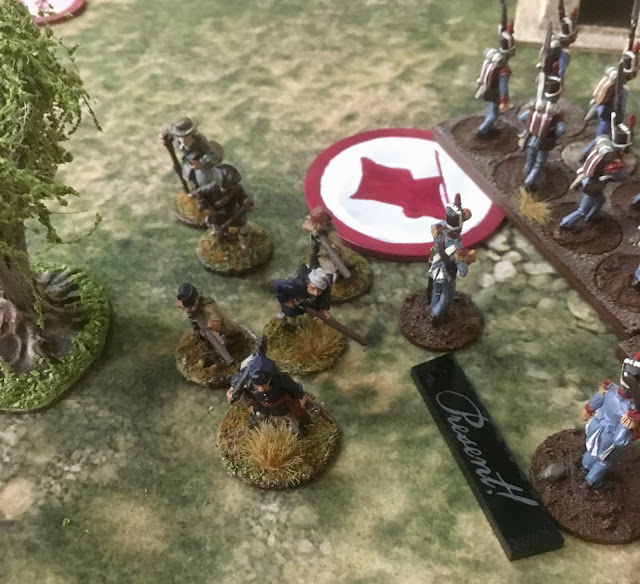 Who Capitán Manzanas orders to fire at the advancing Italian Fucilieri... 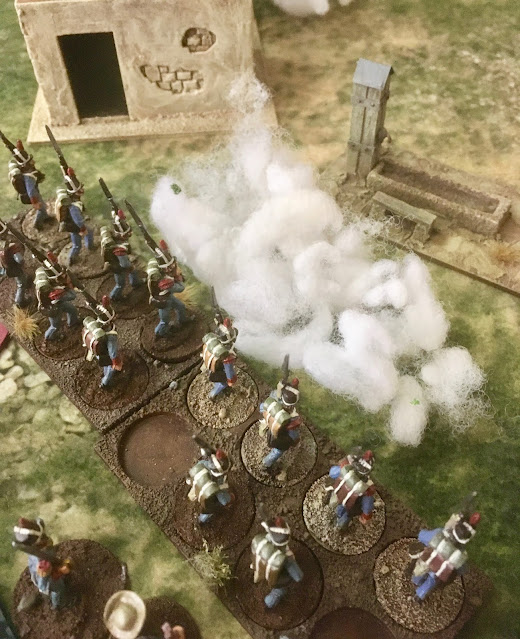 Musket fire piles into the brave Italian conscripts piling Shock on them causing one group to fall back and the other to break. 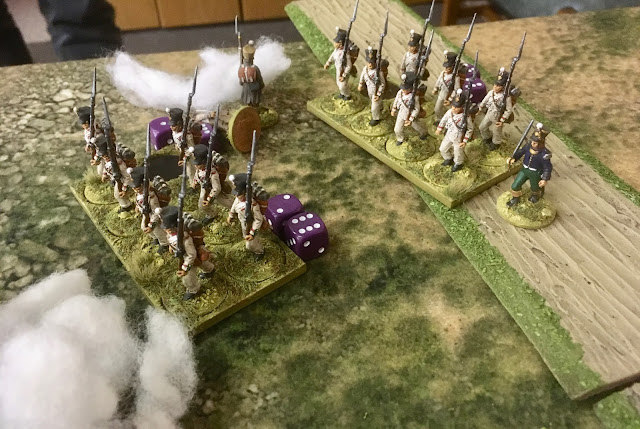 This caused the Italian Force Morale to drop to one and with daylight fading on the battlefield I conceded to Andy. 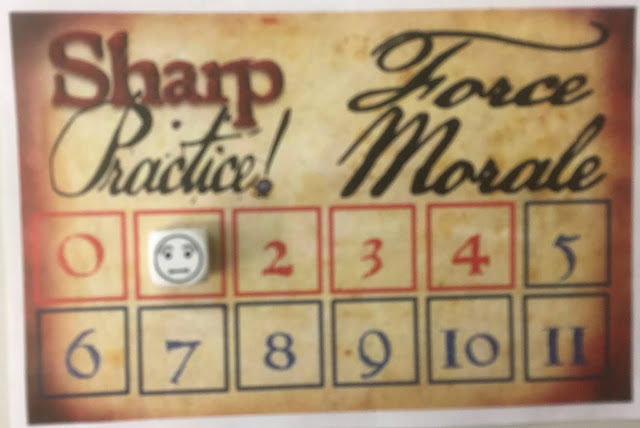 An enjoyable game that swung one way then another, it was interesting how different it was compared to the AWI games we had been playing. I'm not sure I have got used to using the different characteristics my Italians have compared to my American Rebels, hopefully a few more games will get me up to 'match fitness' in time for the Sharp Practice weekend at the end of the month.
Posted by Steve at 14:58:00