With my Kingdom of Italy force off to the En Avant II, Sharp Practice event today, I just managed to finish a Artiglieria a Piedi (Foot Artillery) cannon and crew in time even though I've only once fired a cannon in a game and that was over a year ago (been on the receiving end a few times though!). 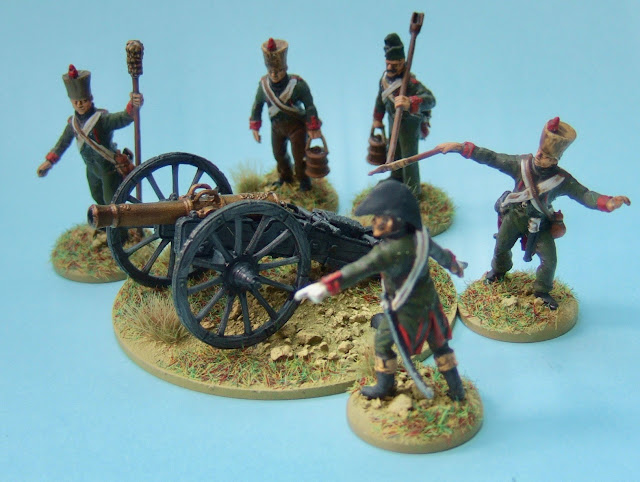 I used the Victrix French Napoleonic Artillery 1804 to 1812 set, the uniforms being basically identical apart from colour, though the Italians wore a visor-less shakos which with plastic figures was not a problem to create using a sharp knife! I'm not 100% sure I have got the uniform green correct, the site I used has them in this more olive shade though others show a less brown infused colour, but I'm not going to overly worry about it. The cannons, unlike the French green ones had their carriages painted grey. 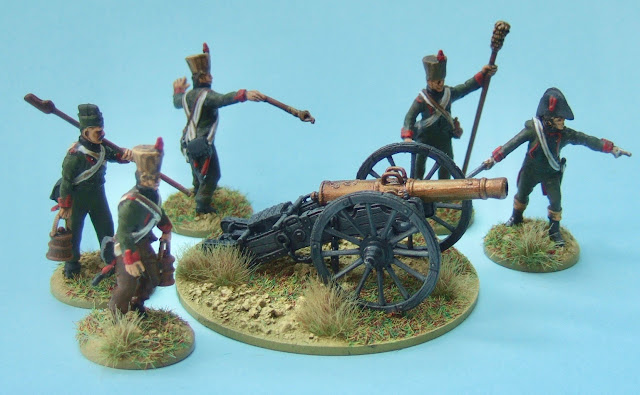 The Italian army had both 8-pounder and 12-pounder foot artillery battles so, as the Victrix set allows you to have either 8pdr or 12 pdr guns for the Gribeauval system, I decided to paint up both barrel options (and after some prevarication pondering magnets, pins, blu-tac,  in the end I have just balanced the barrels on the carriages which seems to work well enough). With the officer taking a leader slot in Sharp Practice I needed an extra crewman so converted a Perry body using some spare Victrix arms for the fifth crewman.

Hopefully I will remember the rules correctly and get the chance to fire at least one round at someone over the next couple of days gaming!