Given the popularity of Sharp Practice down BIG I've been meaning to get a few games in so it all sticks in my head(!)  Luckily Andy has just raised some AWI Redcoats and he was up for getting them blooded and helping me get a grasp of the rules. Andy suggested we play the Escort Duty scenario with the British trying to escort the traitorous spy Joseph Bettys across the board to safety, only to find a Rebel force blocking their route!
The first token drawn was Blue 2 which saw Lieutenant Kraslow and two units of Maryland State Line enter the field... 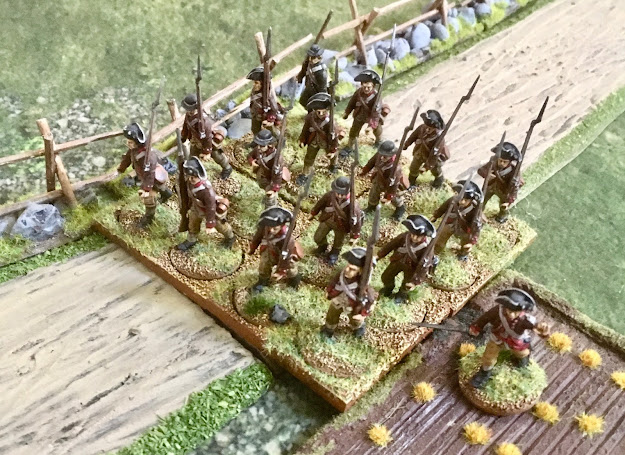 Next up came Sergeant Rowsick and a group of Continental Light Infantry skirmishers, using a Mobile Deployment Point (here shown by a young local woman who pointed out a hidden path through some woods). I did make a mistake with the Light Infantry using the stat line for rifles and not equipping them with muskets as the force list shows. Sorry Andy! :-( 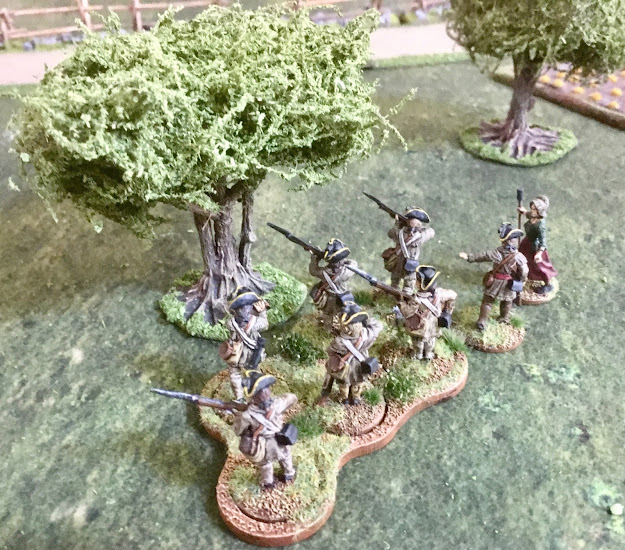 The first redcoats were then spotted, Sergeant Strange and his Light Infantry skirmishers who quickly hid behind a building! 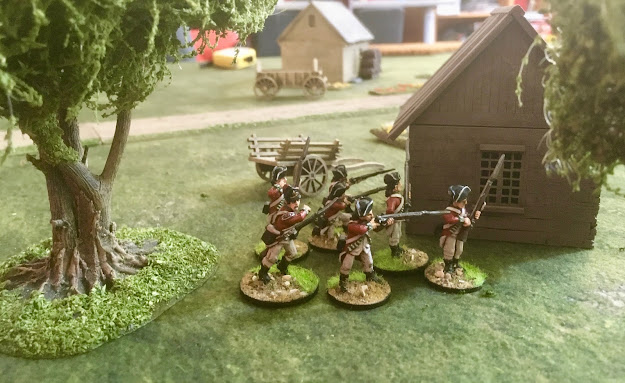 Next up two units of British Light Infantry in Line led by Ensign Masters enter the field of battle. The best troops in the British force they proceed straight down the road towards the Rebels... 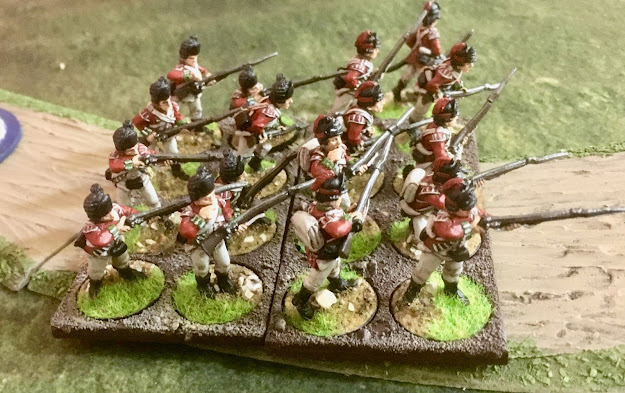 Coming under fire from the Continental Lights who inflicted some Shock on the advancing British... 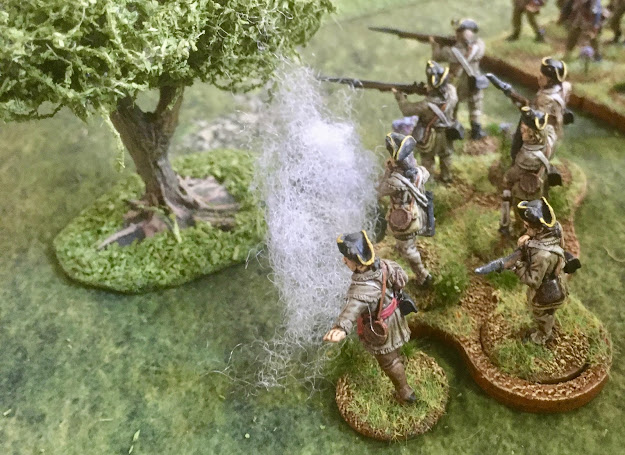 Captain Symonds was next to enter the fray with two units of British Regulars escorting the spy Joe Bettys! 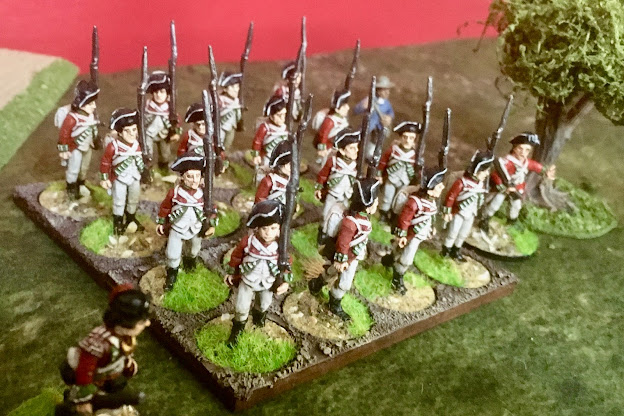 A support unit of Continental Light Dragoons then arrived. These didn't have a leader attached which was to cause me problems later as I failed to keep them within command range of any of my Leaders.

Finally Captain Pollack arrived with three groups of Continental Line, capable of going toe-to-toe with British Line, deploying from the Mobile Deployment Point between the wood and road. 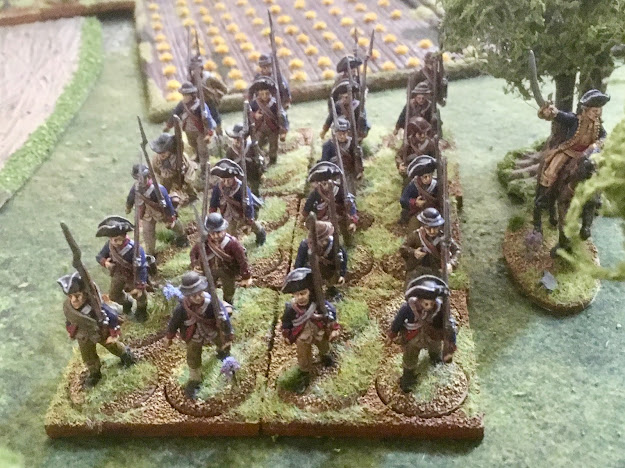 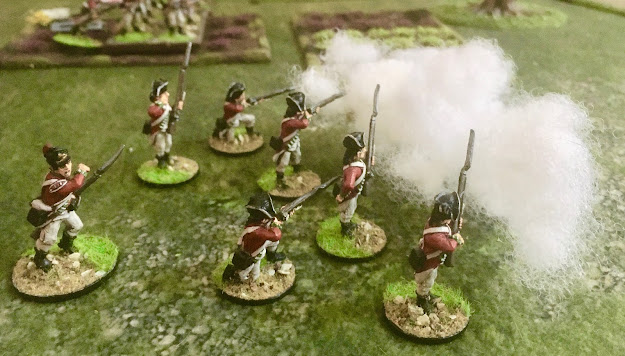 Inflicting a point of Shock on them. 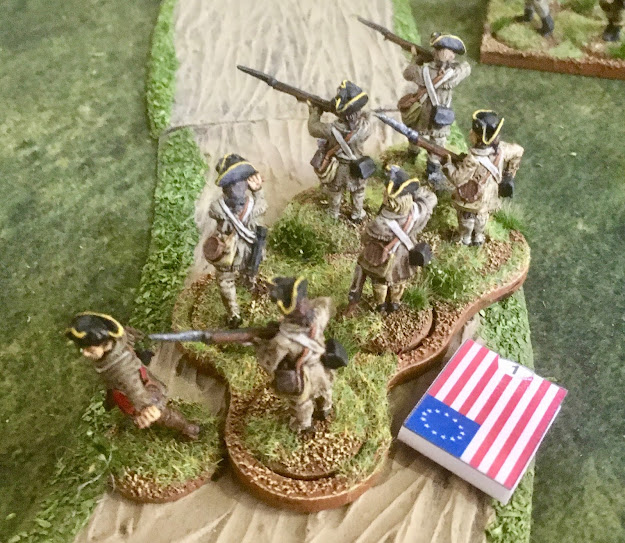 Meanwhile Captain Pollack ordered his Continentals into Line and to Present their muskets towards the enemy, whilst the State Militia moved off the road to cover the flank which the British Line under Captain Simmonds were moving towards. 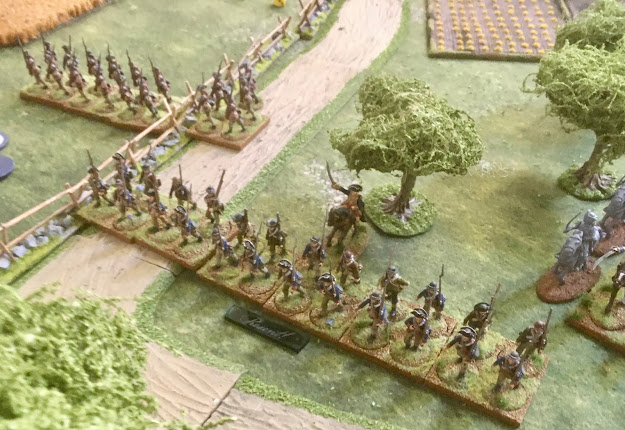 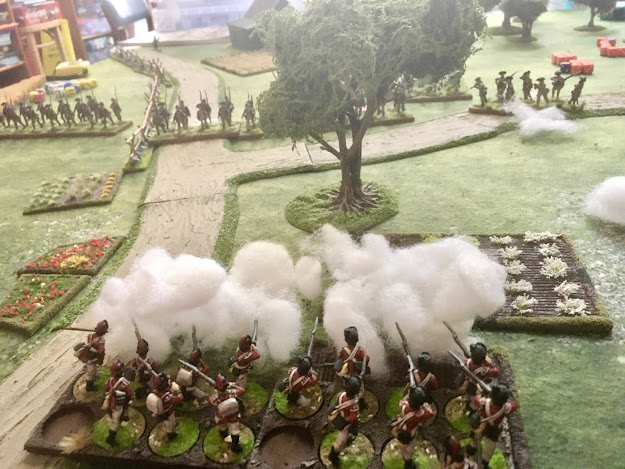 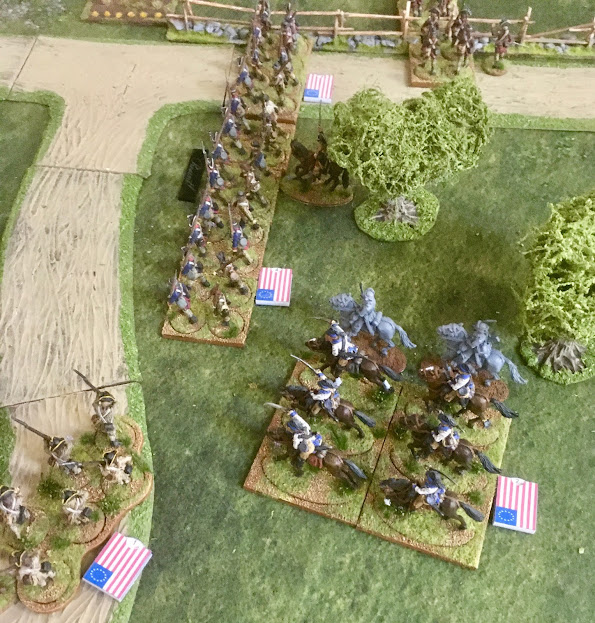 The Gods of War(gaming) were with me tonight however as the chips provided me with Four Command Cards allowing me a bonus activation round so the Continental Line who having already Presented their muskets fired a First Fire volley at the British Light Infantry before swiftly reloading... 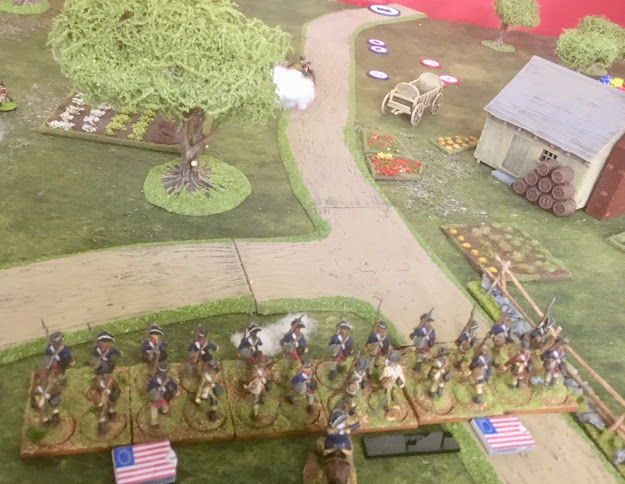 This inflicted Shock and a casualty on the British and with just two tokens left in the bag (my Level 3 leader Captain Pollack and Tiffin) I was fortunate that my Level 3 came out allowing them to Present and Fire again!
Two rounds of Continental volley fire hammered the British Lights, killing two and several points of Shock. 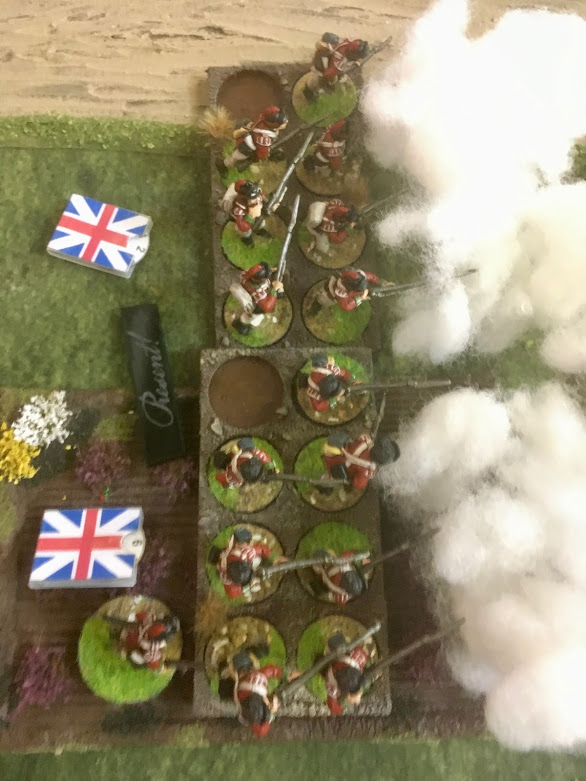 Pushed back both Groups of Light Infantry broke and ran swiftly towards safety! The British Force Morale took a beating this turn. 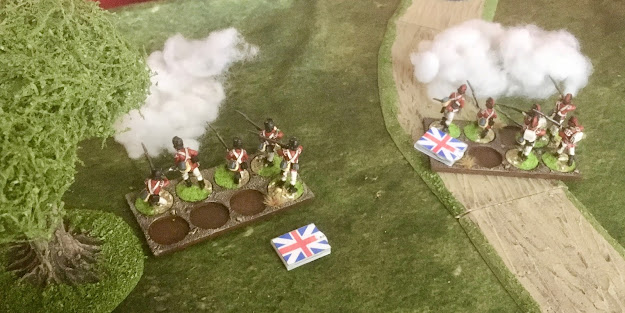 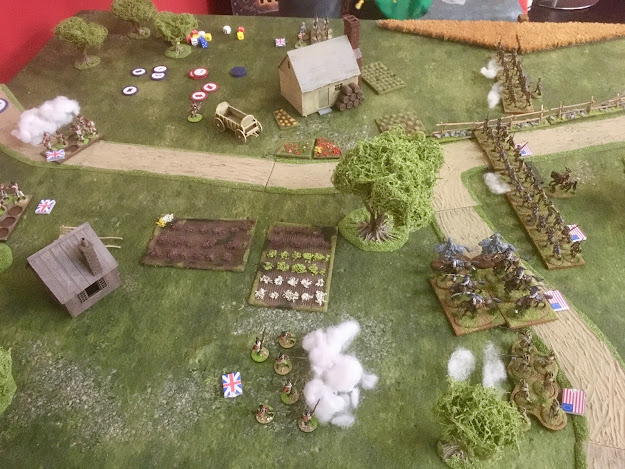 Within the Command range of Captain Pollack the Light Dragoons were ordered to Charge down the remaining British Lights who attempted to evade but failed.
Retreating Skirmishers against Charging Impact Cavalry, the result was not in doubt... 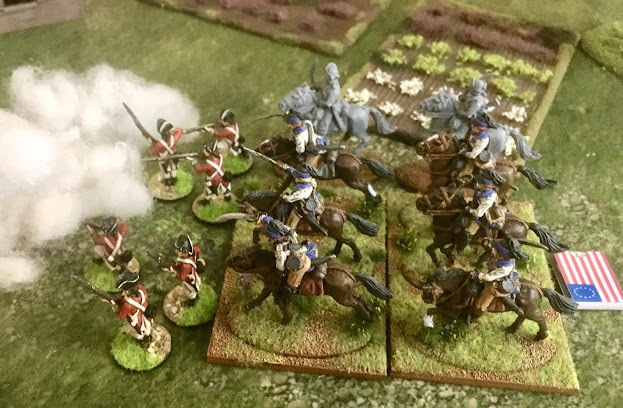 ...except for my awful dice rolling!
Needing fives and sixes out of a handful of dice I managed to only kill one and inflict another point of Shock! Shocking indeed! 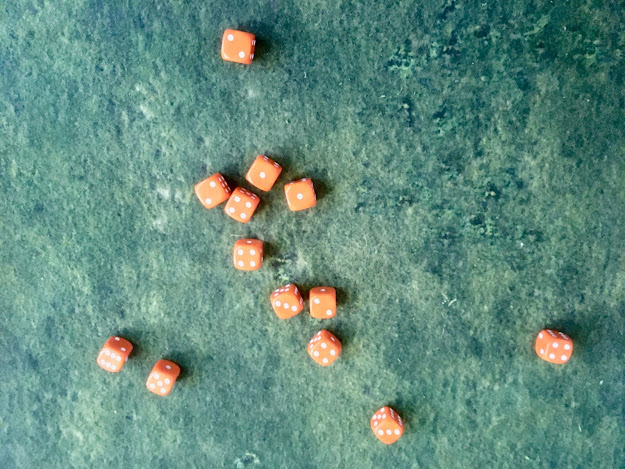 The British Light then began shooting up the leaderless Dragoons inflicting two casualties and forcing them to retreat, negatively impacting the American Force Morale.
Meanwhile on the American right flank, Captain Simmond's Line escorting the spy Bettys, charged into Lieutenant Kraslow's State Line  who foolishly had not reloaded their muskets. 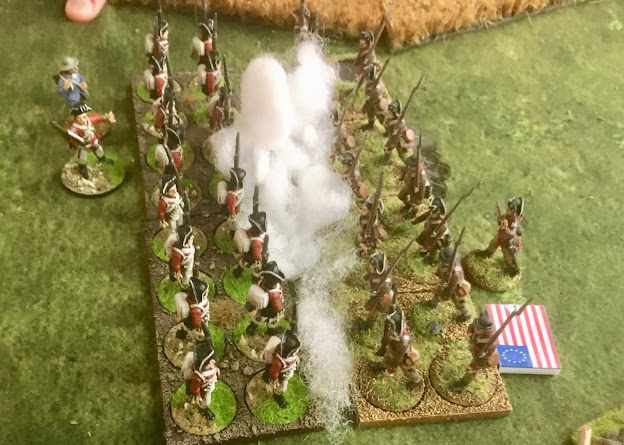 Unsurprisingly (well to me at least) a savage bayoneting saw the Marylanders lose several men, pick up a pile of Shock and see Lieutenant Kraslow knocked out! Breaking, the American Force Morale suddenly plummeted losing them two Command cards. 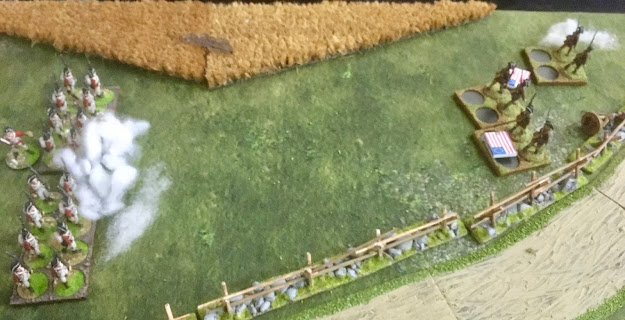 However in the melee the State Line managed to inflict one casualty on the British. As this was Captain Simmonds group Andy had to role to see if his Leader or the Spy was the casualty. He rolled a one, it was one of them. He then rolled to see if Simmonds was dead or the spy...
It was the spy! The escort mission had failed! 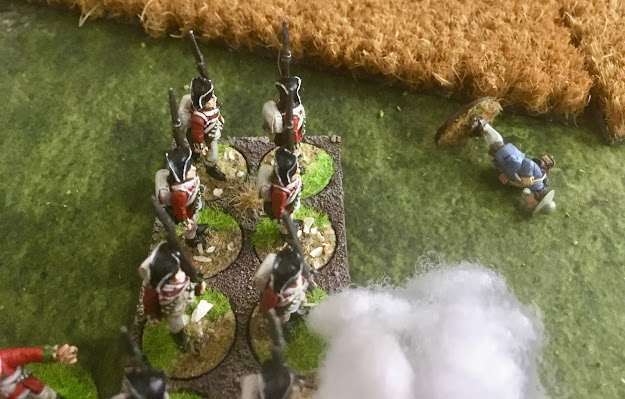 We decided to continue the battle to see if the British Line could reach the safety of the table edge... Captain Pollack broke up his Continental Line formation to try and shoot the British in the flank.
Would the British get to move first before the Americans could reload and fire? 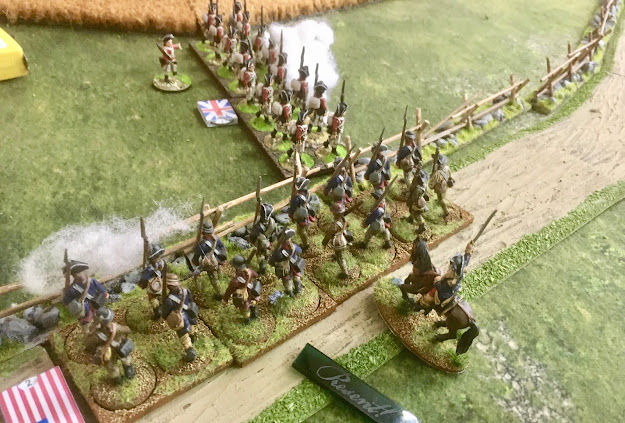 Yes they could, however Sergeant Rowsick's Continental Lights started shooting at their rear inflicting Double Shock! 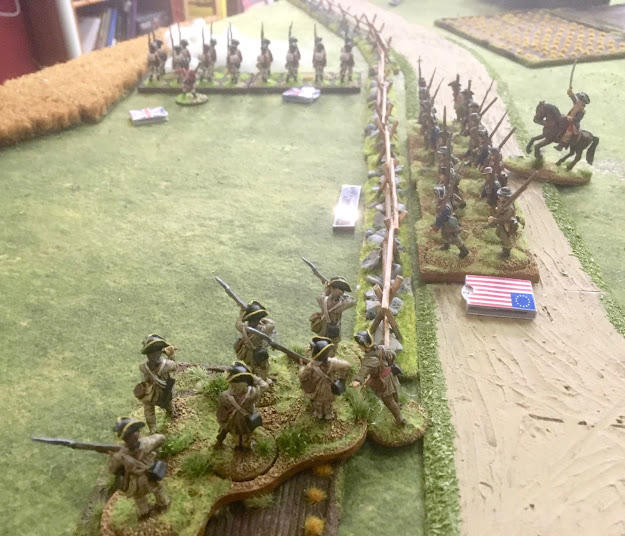 Really needing Tiffin and a new activation for Captain Simmonds next, unfortunately for Andy, Captain Pollack and his Continental Line activated next, the two groups loading and firing into the rear of the British killing two and piling Shock on. 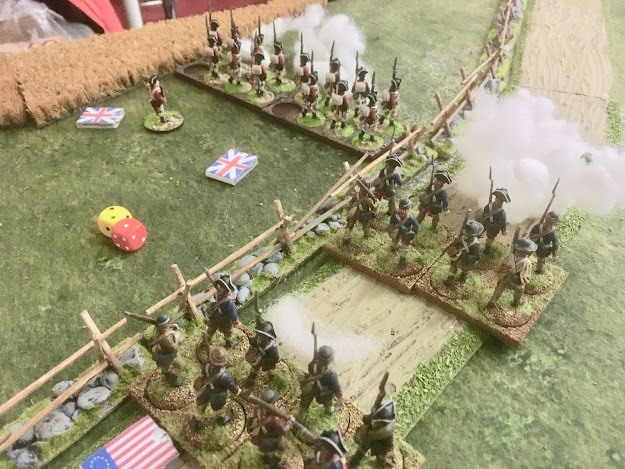 Faced with annihilation, Andy conceded at this point...
An enjoyable game, I am beginning to get my head around the nuances of Sharp Practice and its differences with Rebels & Patriots. We subsequently realised the units points costs in the rulebook are wrong and this coupled with my accidental upgrading of my Lights with the longer range muskets meant I should not have had the Dragoon support - that said they weren't as useful as they should have been!
I'm looking forward to trying the rules again soon, maybe seeing how my usually useless Militia fare under a different set of rules!
Posted by Steve at 15:32:00