The Men Who Would Be Kings: Nischay Kar Apni Jeet Karon...

After the previous debacle against the rebellious Afghans under the command of Amir George Khan, the Imperial forces of the Queen returned to give the natives a damned good thrashing.

Unfortunately nobody told the natives, or my dice...

We decided to play the Take the High Road scenario from The Men Who Would Be Kings, George having 36 points of Afghans, me 27 points of British regulars, Sikh regulars and Tajik Irregulars. I had to deploy in the centre of the table and stop the Afghans from capturing the objective (the building). 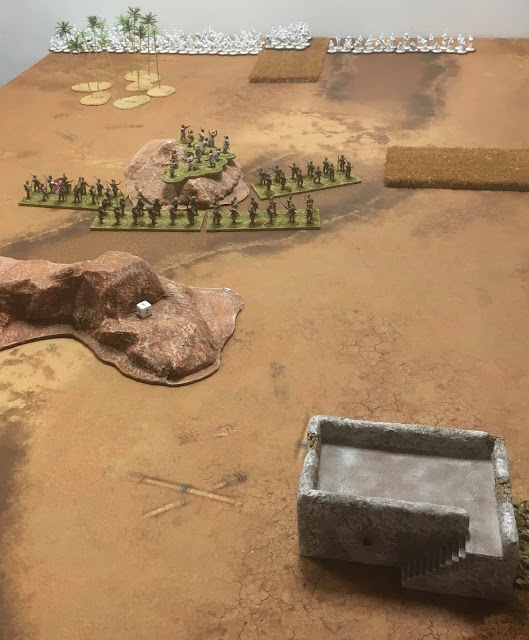 My cunning plan was to fall back towards my table edge and put a couple of units in the hills to make use of the soft cover against the advancing horde.

Unfortunately from turn one things started to unravel as the 3/66th and the Tajiks refused orders to fall back! 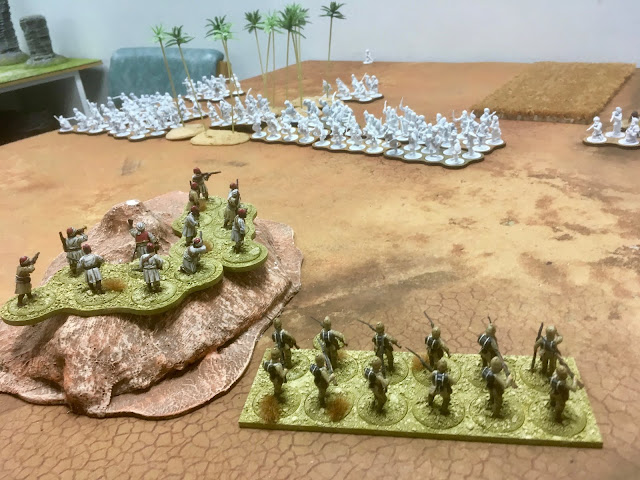 The 3/66th soon found themselves taking casualties from the Afghan Irregular Infantry rifles but despite this refused once again to retire. The Tajiks woke up to the threat and retreated At The Double to the safety of the building! 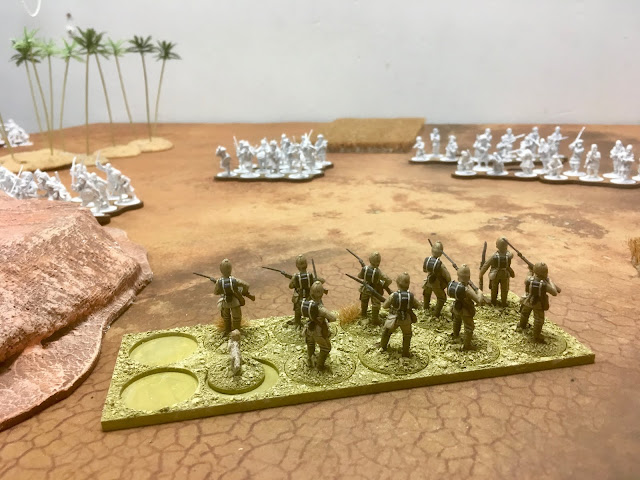 The 1/66th and 15th Sikhs fell back in good order, taking position in the Soft Cover of the hills (this would mean George has to roll an additional hit to cause a casualty) whilst the Tajiks retired to the building to occupy it (and secure 5 VP). 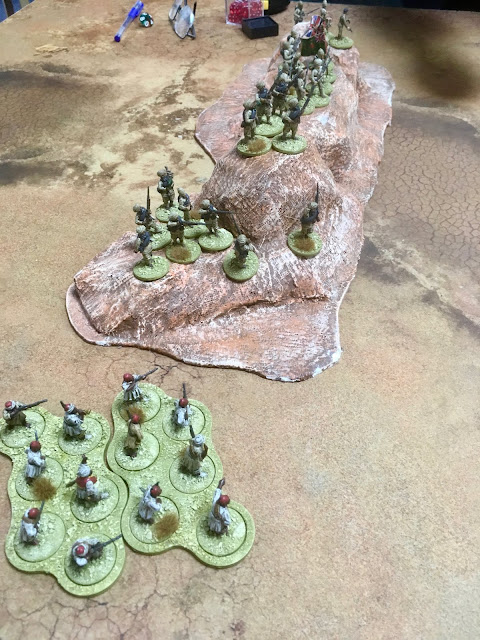 The 3/66th were soon to pay for their stubborn refusal to retreat when faced with a horde of screaming Afghans as a unit of Ghazis charged them... 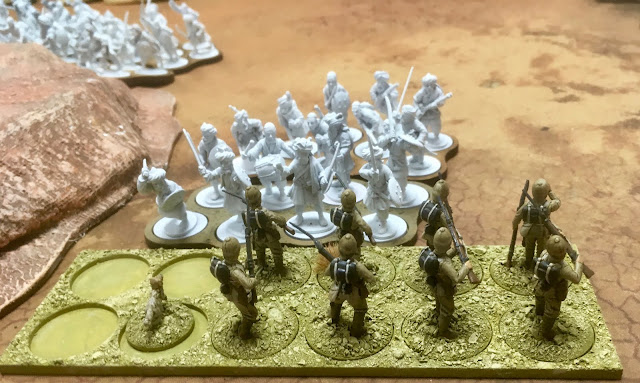 ...and almost wiped them out in one turn of hand to hand combat! 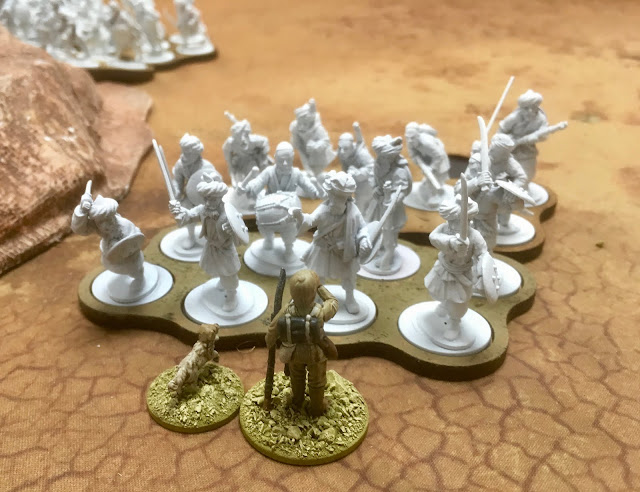 The 1/66th in the hills soon came under fire from three units of Irregular Infantry and despite needing three hits to inflict a casualty they soon started to lose numbers and failed a Pin test! 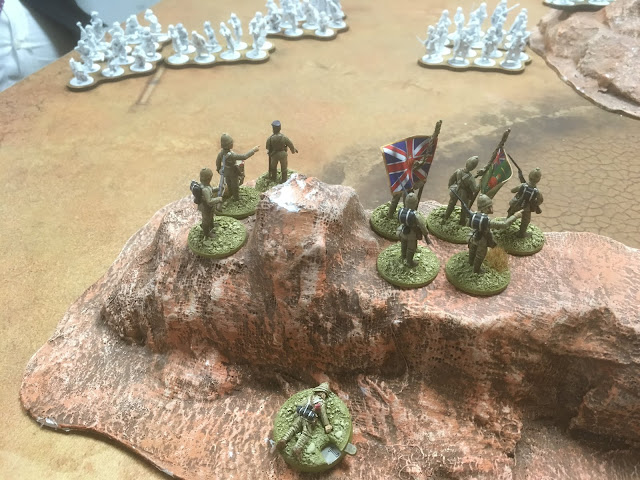 Soon they were down to half strength and although their Sikh allies were still at 100% there were a LOT of Afghans advancing towards them! 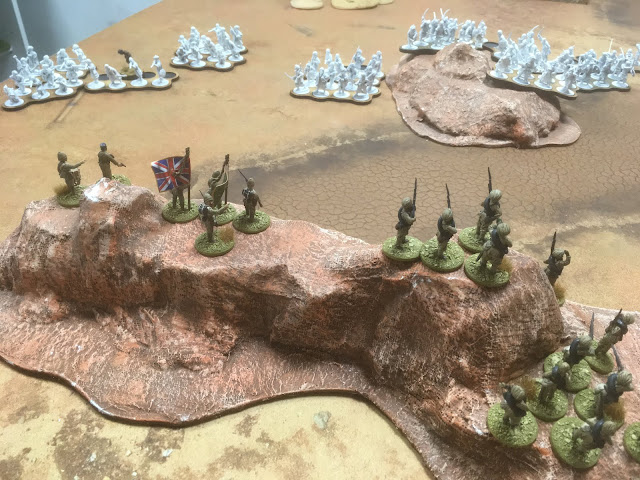 The 2/66th  made an elementary error of getting in range of another unit of Irregular rifles and taking two casualties failed a Pin test. 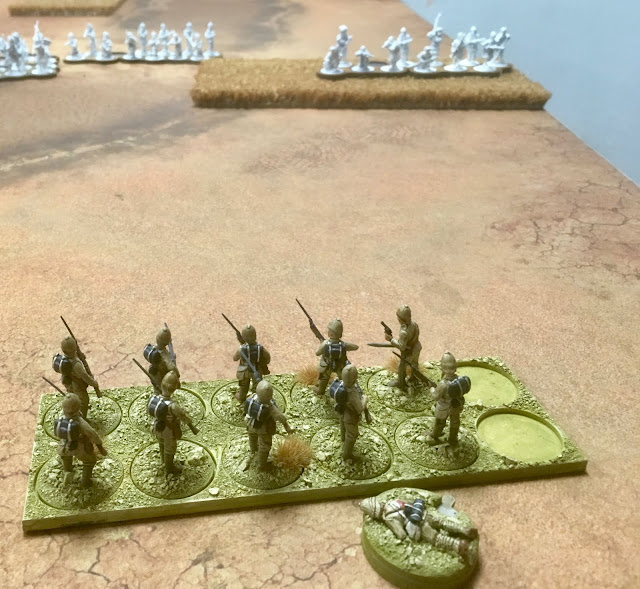 This was to prove critical as they kept successfully Rallying in my turn, only to lose another man or two nd get Pinned again in George's turn (my dice rolling was atrocious on Pinning tests, the irony being if I had failed a Rally test I would have moved back 3 inches out of range!). George thought it was funny...

With the 1/66th now down to 1/3 strength I decided to pull them back to the building and use the full strength Tajik Irregular Infantry to try and help stem the Afghan tide... 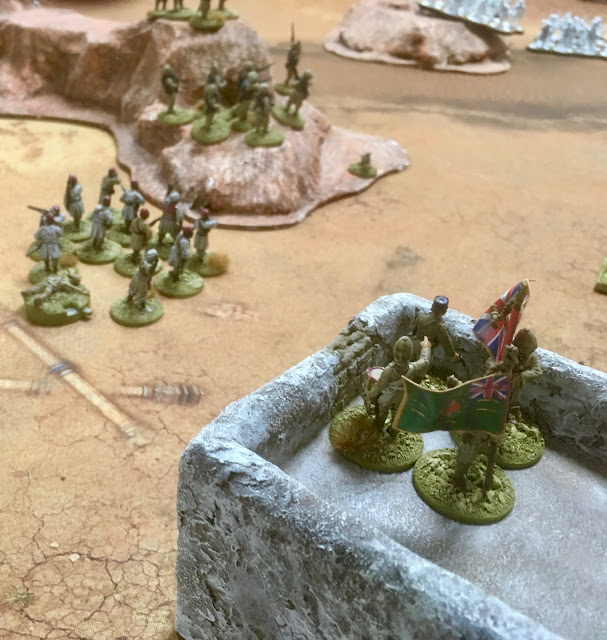 This met with some initial success as the Tajik's pinned one unit of Irregular Afghans who attempted to outflank the 15th Sikhs... 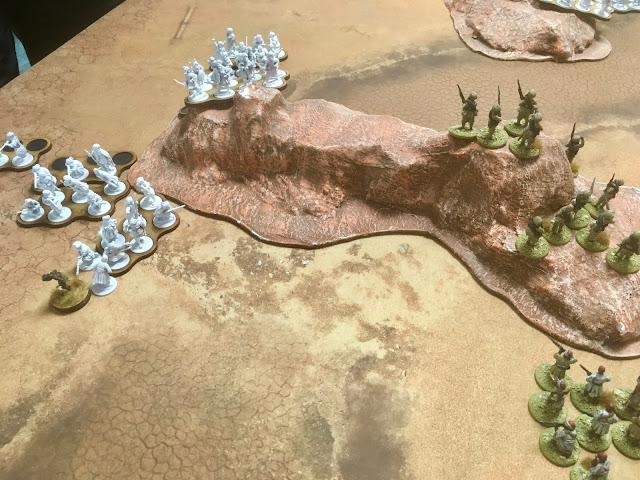 Elsewhere the 2/66th had a stroke of 'luck' as their officer was killed and they failed a Rally test, moving back out of range of the Afghan rifles. Unfortunately they were down to 1/4 strength now. 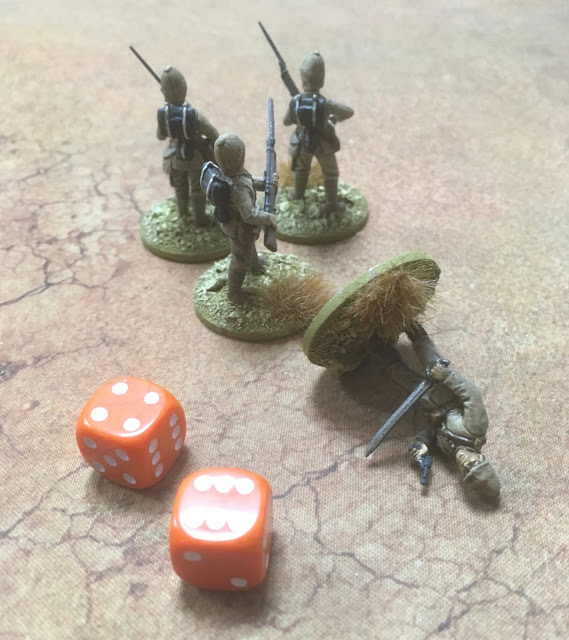 Amir George Khan decided the time was right to finish things off and launched a unit of Ghazis at the 15th Sikhs. 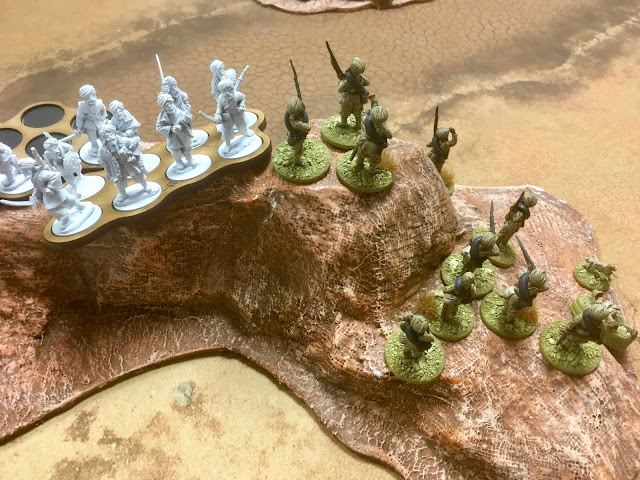 A flurry of steel saw one Afghan fall and two Sikhs! The 15th were forced back and then.... failed a Pin test! :-( 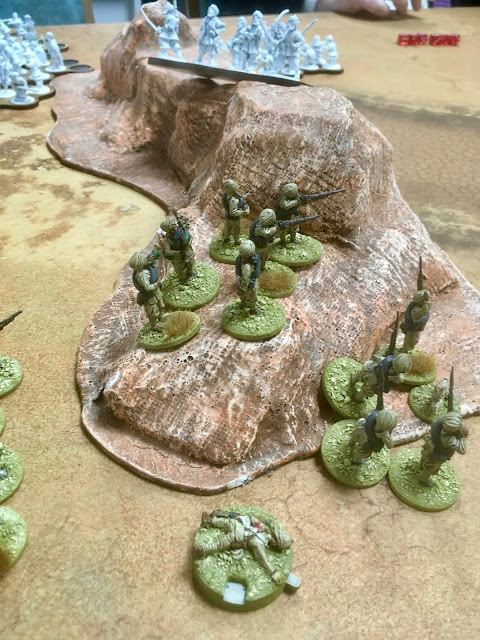 Amir George Khan licked his lips as Pinned units can only fight at half strength. He launched another unit of Ghazis in on the Sikhs, expecting a bloodbath! 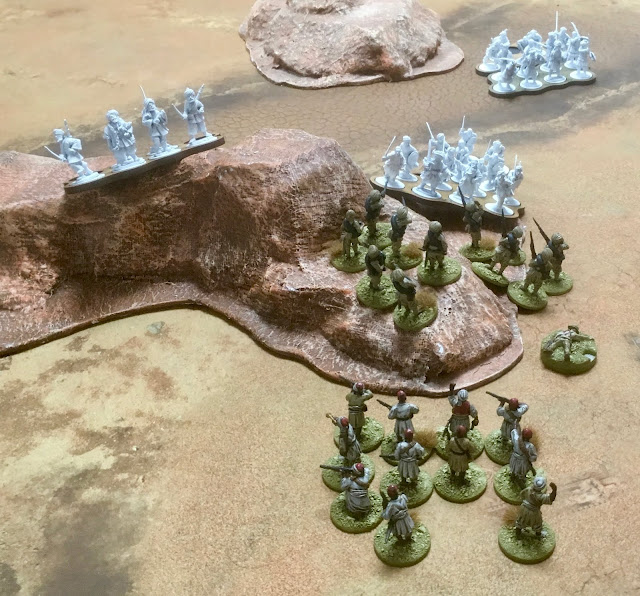 However with a cry of "Jo Bole So Nihal, Sat Sri Akal!" the Pinned Sikhs beat the Ghazis back and Pinned the Afghan fanatics! 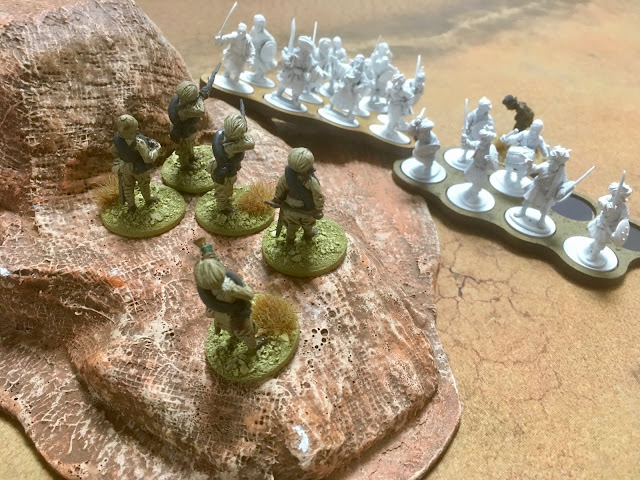 However they lost half their strength in the process...

Another unit of Ghazis changed in... 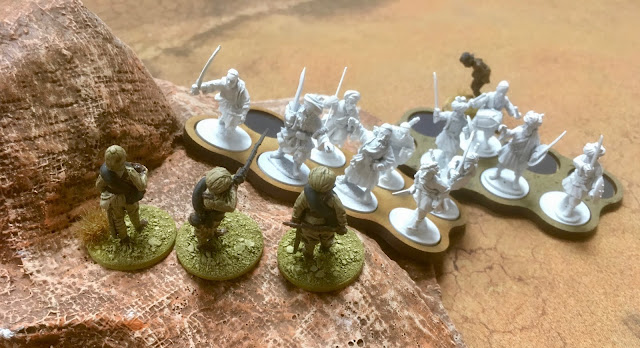 And they were beaten back and Pinned! However the 15th were down to two men now... 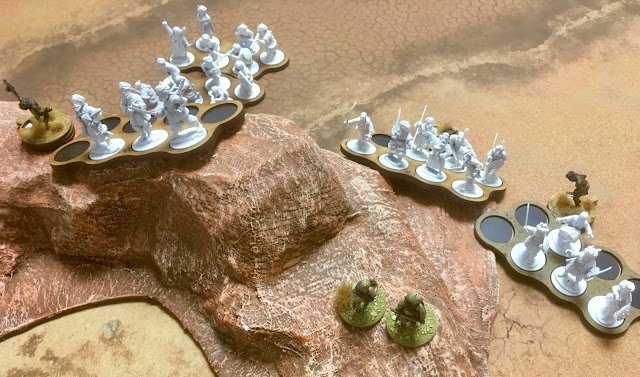 The three rifles of the 2/66th, who had been making a pest of themselves shooting Ghazis on their flank, fell to repeated Afghan rifle fire and with Afghans closing in on the building I decided to concede the field to the enemy... 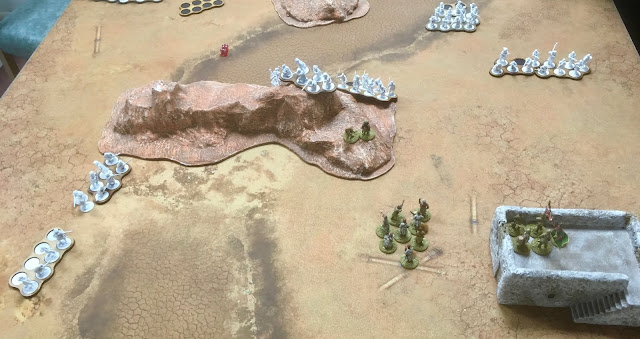 My cunning plan fell to pieces at the start with 1/4 of my army refusing to fall back in an orderly fashion and thus surrendering a lot of useful firepower. My error in getting the 2/66th too close to the cover that allowed the Afghans to snipe me from the tall grass didn't help either.