The Men Who Would Be Kings: Blow The Bugle, Draw The Sword...

For our latest adventure with The Men Who Would Be Kings George brought along his new native army - Afghans! So now not just some fanatical guys with slashy swords (instead of stabby sticks) trying to kill the sons of Empire, but a whole load of ones with guns!

His army is a mix of old Foundry, Perry, Artizan and Studio and whilst there is some size difference they mix together really well and even in their currently undercoated state look really nice en masse...

We decided to play the 'A Sigh of Relief' scenario that we'd played previously in the Sudan. As we had found it be a tad unbalanced so we decided to play length ways (otherwise the central forces would be in rifle range immediately) and allow the Afghan relief forces to start rolling for arrival from turn one not two.

Again we played 36 points, George starting with 16 points in the centre with the captured 66th Foot's mascot Bobby! We used the terrain rules from Principles of War and somehow managed to generate the flattest area of the North West Frontier with some rough ground, farmland and forests but no mountains or hills! 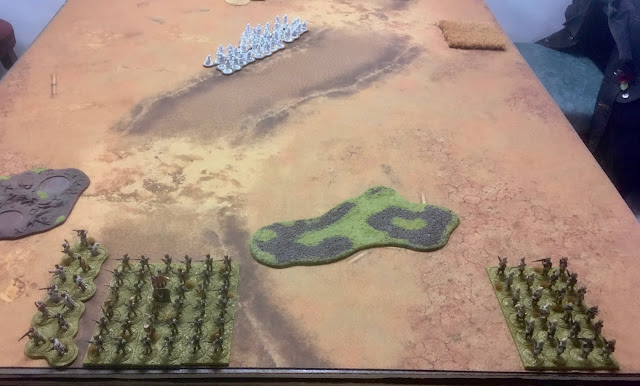 The game did not get off to an auspicious start for the British Field Force with half of the units refusing orders to advance on turn one! 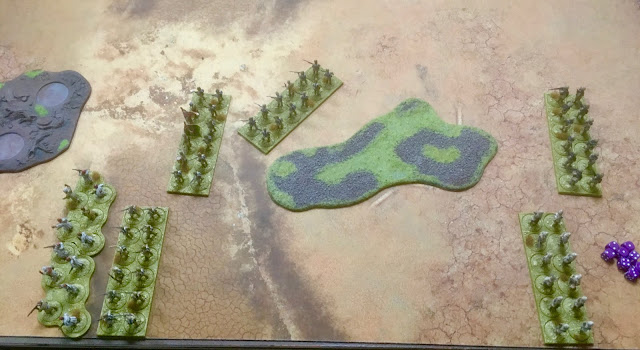 A couple of turns in I had managed to get most of my guys to move up, although Amir George's relief party was also moving up the table and I forgot that Afghans had rifles and lost one of my Sikhs! 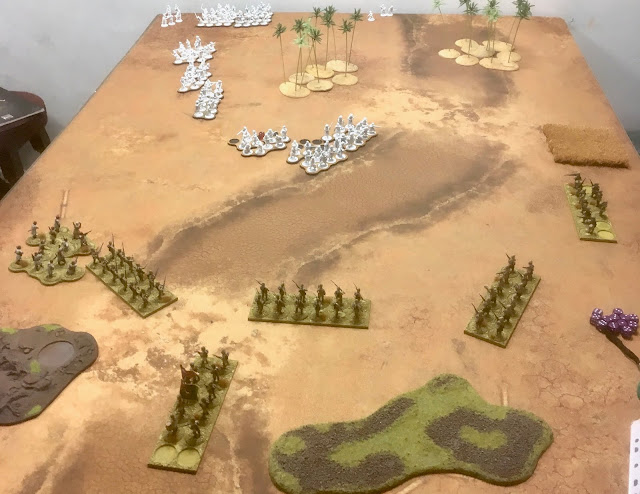 My attempt to return fire was pathetic - this was one roll of 12 dice attempting hits on a 5 or 6 at long range... Needing two hits to cause one casualty George insisted I take a photo! 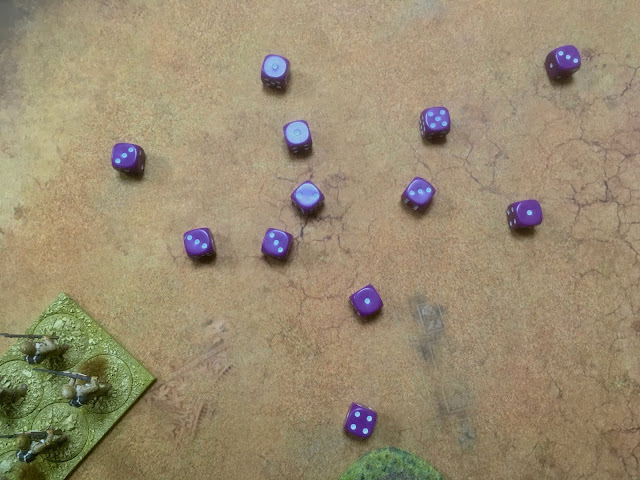 As I was failing at my dice rolls, Amir George was not and now all his reinforcements were on the table... 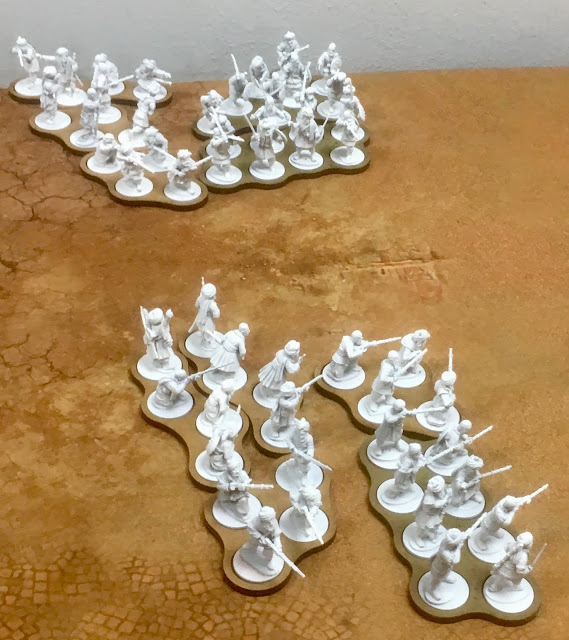 Next turn the 2/66th opened up on Bobby the dog's nefarious kidnappers, killing three and Pinning them. They failed a Rally test and retreated three inches (something they continued to do all game). 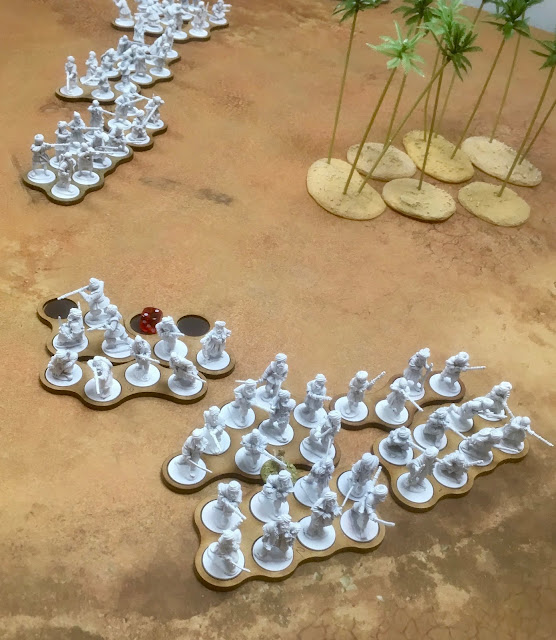 My dice rolling subsequently improved and I managed to Pin four of Amir George's units in one turn. 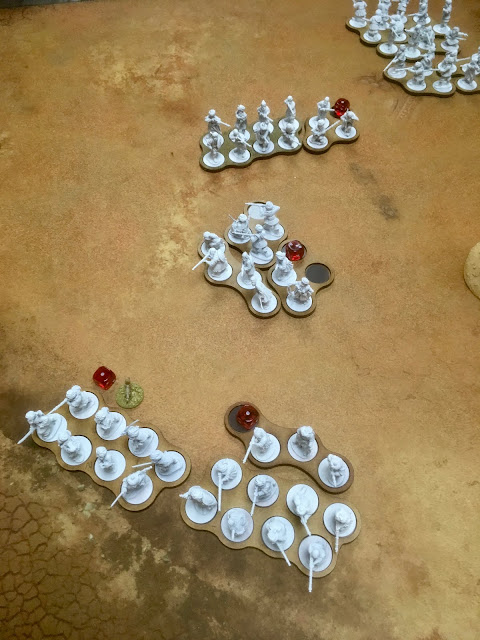 Amir George's dice rolling was now not so good and his Ghazis guarding Bobby rolled 2 on a Rallly test and routed! 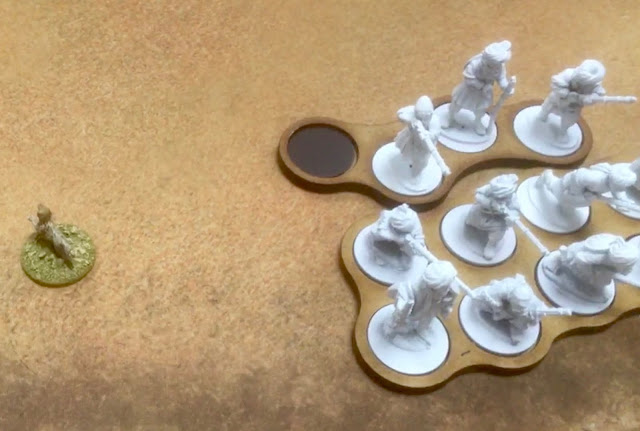 Things got worse for Amir George next turn as the other Pinned Irregular Infantry who had kidnapped Bobby also routed. Suddenly no one was guarding the objective! 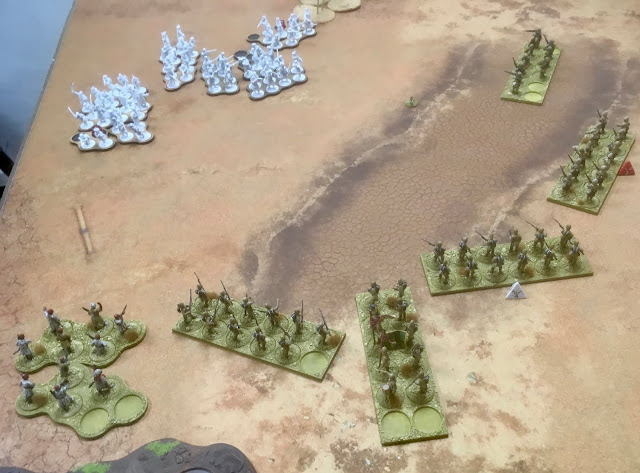 The 1/66th moved up to try and help form a bulwark against the advancing Agfhan relief force but walked into a mass of fire from the Tribsemen, lost three soldiers and were pinned with a unit of Ghazi Fanatic Tribal Infantry advancing towards them. 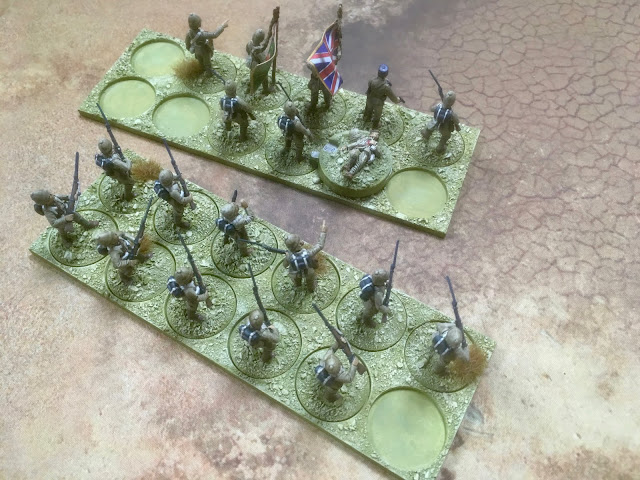 The 2/66th move through the 1/66th to protect them form the advancing Afghans and the 15th Sikhs advanced to rescue Bobby! 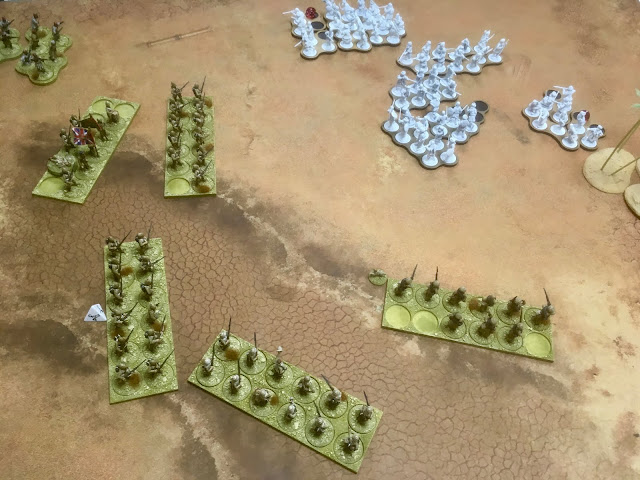 Technically this fulfilled the scenario objective, but as the bulk of the Afghan force had not got anywhere near the fighting we decided to continue the game to see if the British could successfully get Bobby to safety off their table edge. 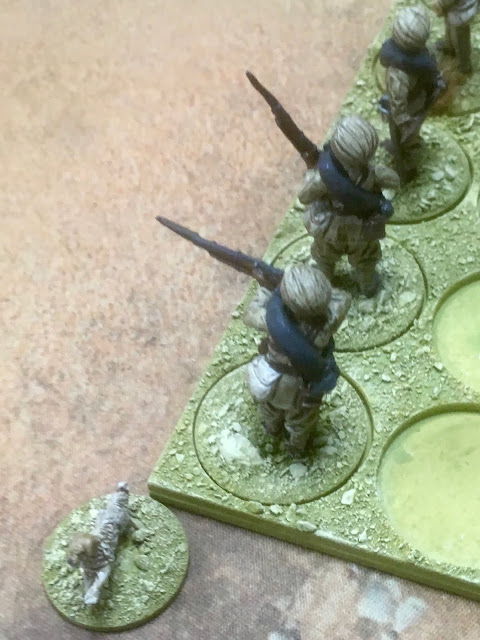 Amir George immediately took advantage of this extension by charging a unit of his Ghazi fanatics into the Sikhs... 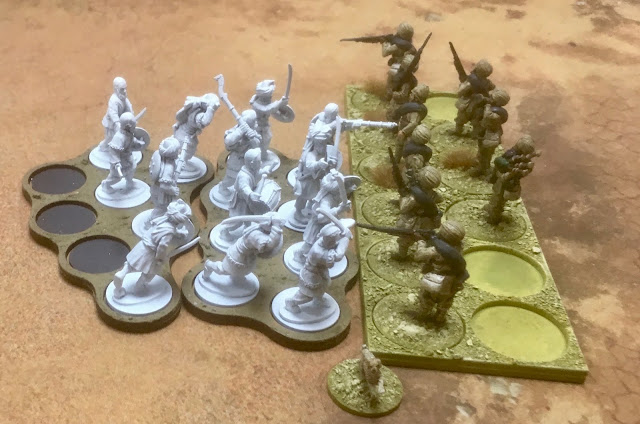 Killing all but two! 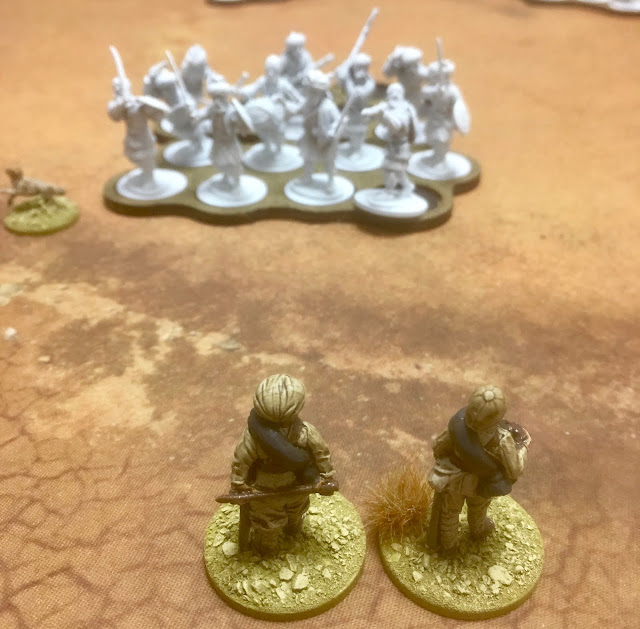 Elsewhere Amir George shot at the 2/66th causing one casualty. Incredibly they failed the Pin test and he then charged his other unit of Ghazis in! 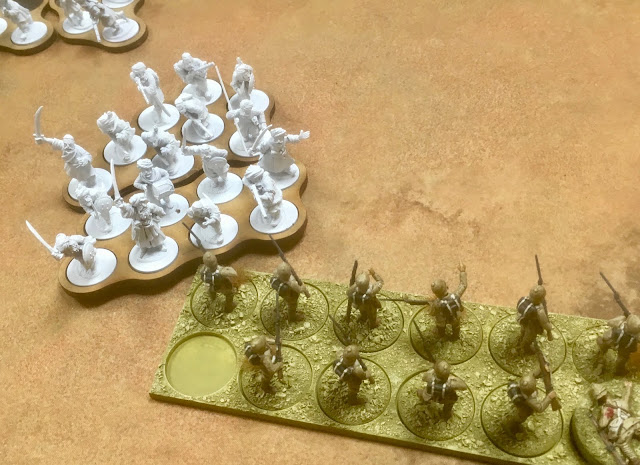 Wiping out most of the 2/66th and forcing them back... 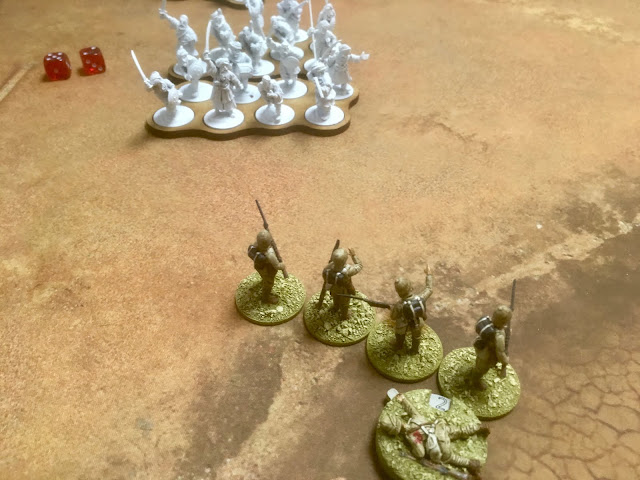 The rest of the British Field Force then swung into action. The 92nd (Gordon Highlanders) who were in Close Order fired a devastating close range volley at the Ghazis who had attacked the Sikhs, almost completely wiping them out... 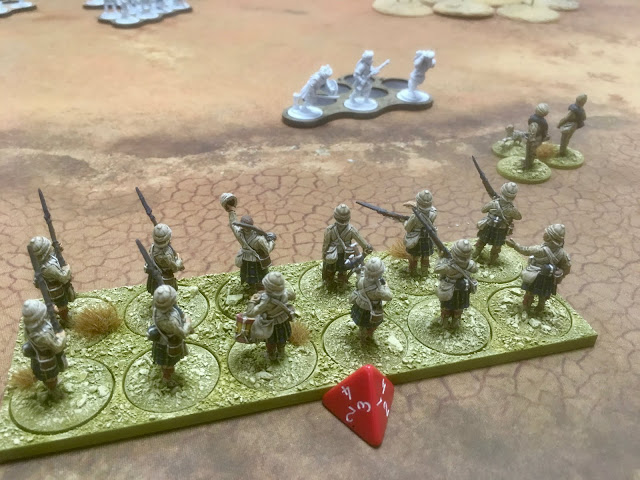 The 3/66th (also in Close Order) similarly fired a volley at the other Ghazi unit killing a large number of them and some Herat mercenary Irregular guides (looking somewhat like Bazingers...) attached to the British force joined in the firing, resulting in the 18 man unit having just 3 left standing at the end of the turn. 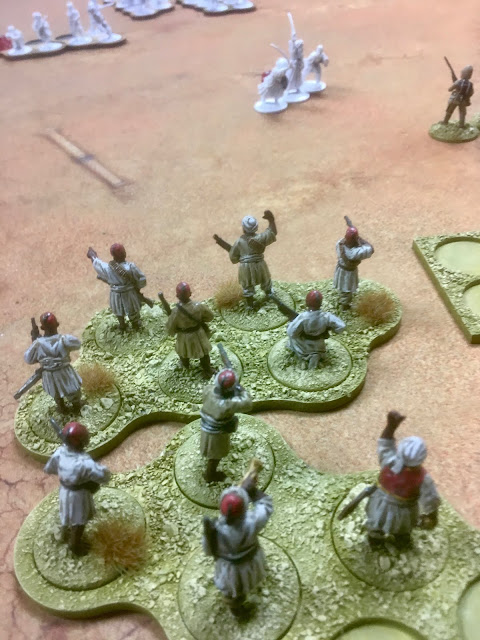 Next turn another volley from the Gordons took out the remaining Ghazis who had attacked the Sikhs and after several turns failing Pin tests and retreating the unit of Irregular Rifles Pinned right at the start of the game failed again and Routed.

With three Ghazis and just two units of Irregular Infantry facing two British infantry units in Close Order and several others at varying degrees of reduced strength, Amir George decided discretion was the better part of valour and conceded victory to the British... 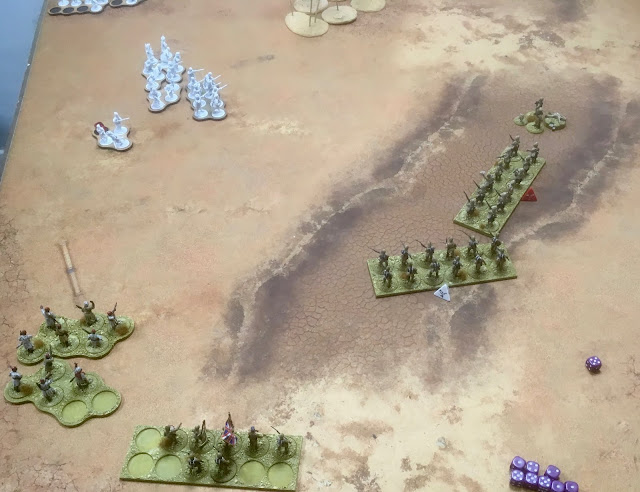 A good game which could well have turned out differently if the terrain generation had not resulted in a very atypical North-West Frontier table.

The scenario does work better played lengthways - it can be played starting on either long or short edges but if the Attacker enters from the long edge they can either reach the centre of the table or fire at the enemy there before the relief force gets out of bed. Having the attackers try and retreat to safety after rescuing the objective I think also improves it...

A couple of other tweaks might be to have the objective able to be moved on a Move order away from the Attacker or the Defender's relief force randomly appear from any table side on their half of the table not the opposite to where the Attacker comes on.

Playing against the Afghans was interesting and on a couple of occasions I forgot they were better shots than the Sudanese and lost troops I shouldn't have. This wasn't a major problem this time, but in the future is something I need to remember...

Next week we intend to try the 'Take The High Road' scenario again back in the Sudan with the Mahdists trying to seize the hill guarded by a smaller British force. Don't mention Isandlwana...

Email ThisBlogThis!Share to TwitterShare to FacebookShare to Pinterest
Labels: Colonial wargaming, North-West Frontier, Second Afghan War, The Men Who Would Be Kings