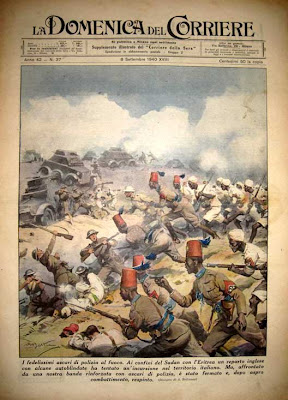 As my surfing for pictures of colonial units in WW2 expanded I had the brainwave of using other countries Google platforms so instead of Google.com or .co.uk, I decided to try Google.it to find pictures of Italian Askari in WW2. This turned out to be quite a successful exercise and I came across some interesting material that was not being picked up by the English language sites (including this website of one Italian gamer with photos of his forces for the Battle of Gallabat).

I also came across this wonderful full colour cover of an edition of La Domencia del Corriere featuring an attack by Italian colonial forces on a British armoured column. What interested me was that alongside the Askari are some native troops in Dervish style costume. It turns out that alongside their European forces and trained native Askari, the Italians also employed irregular forces called Bande (literally bands). It even appears that whilst not accurate the picture is inspired by a real life attack of the Gruppo Bande Amhara on a British armoured coloumn near Cherù in Ethiopia under the command of Lieutenant Amedeo Guillet (who was also prominent in the Italian Guerilla War fought in Ethiopia from 1941 to 43).

Whilst the Bande appear to differ in look from unit to unit, some wearing Italian army tunics others traditional Nile Arab dress, it occurred to me that with minimal change a small unit could be raised cheaply from a box of Perry plastic Madhists with other figures possibly being used for a range of projects from Greek Peltasts to LOTR Abrakhan Guard. I must confess I am somewhat tempted and finding researching the East Africa campaign fascinating...
Posted by Steve at 23:23:00