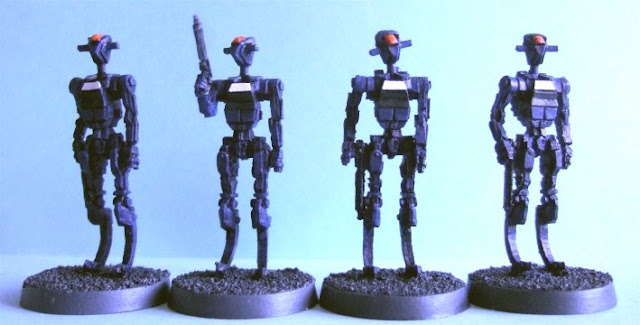 For a bit of a change, I started working on some SATYR robots I had picked up from Victory Force Miniatures earlier this year. The bulk are earmarked for battlefield use but I kept four aside to paint up as robot police for Firewall 2136AD games inspired by this video on You Tube.

The paint scheme is quite simple, just an overall blue drybrushed over black with white and black front panels and an orange light on top of the head (I don't think that's what the sculptor had in mind but I think it looks good and added a splash of colour).
The miniatures are about 40mm tall and I really liked the spring type legs, however they did require a fair bit of work to get them ready for painting, more than most miniatures usually do these days. They are also rather static, which works well for the police but less so for the battlefield. However, they are moulded in a suitable soft white metal to allow for heads and legs to be bent (carefully) as required.
Posted by Steve at 14:54:00