The Men Who Would Be Kings: Where Bugles Call and Rifles Gleam...

Apologies for the delay in reporting the latest action from the Sudan, despatches being delayed by the festive preparations and subsequent consumption of turkey and alcohol!

George and I decided we would try another crack at the Take The High Road scenario from The Men Who Would Be Kings, battles of this particular scenario standing at 2-0 in favour of George and his stabby stick armed Mahdists.  George as attacker had 36 points, I had 27 deciding to invest solely in infantry this time around.

Rather than a hill, the objective here was a building and this time the terrain generation rolls fell my way with a generally flat table with limited cover in front of the objective. 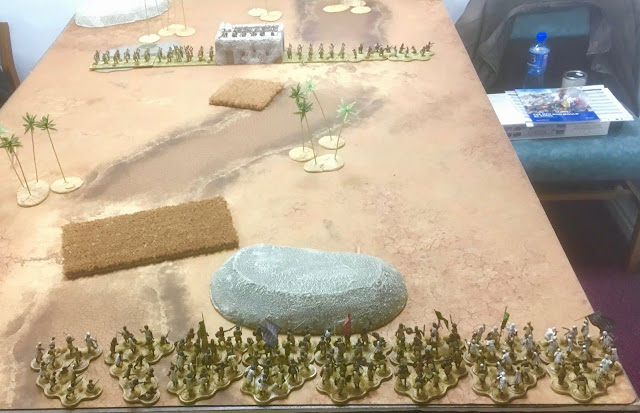 George has now finished painting his 36 point army and jolly nice it looked advancing across the board... 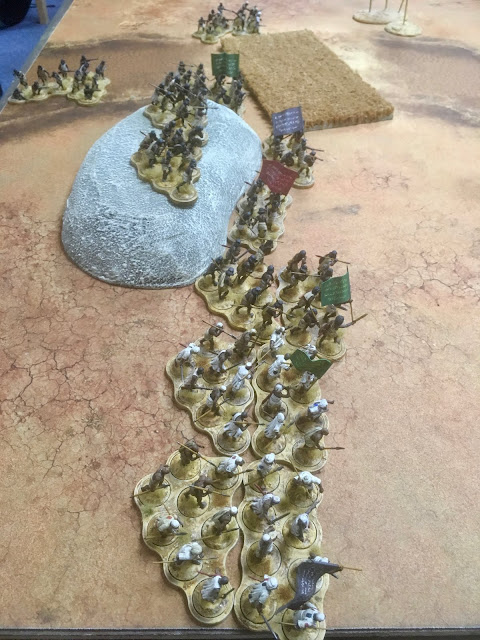 As he deployed most of his forces on my left flank (clearly perceiving the Bazingers as the weak link), I moved my right flank forward to engage his pesky Irregular Infantry rifles which had been a thorn in my side in more than one game previously... 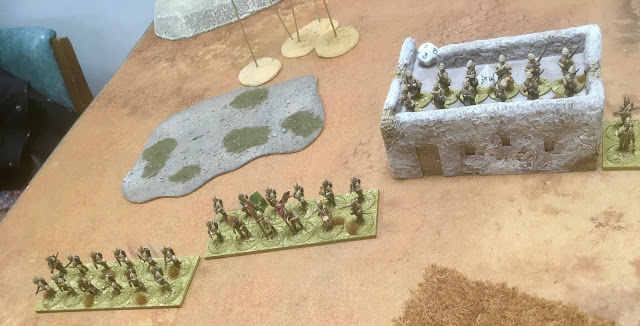 As the bulk of the Mahdists advanced across the board, the 1/66th and 3/66th opened fire at Long Range inflicting casualties and Pinning two units, 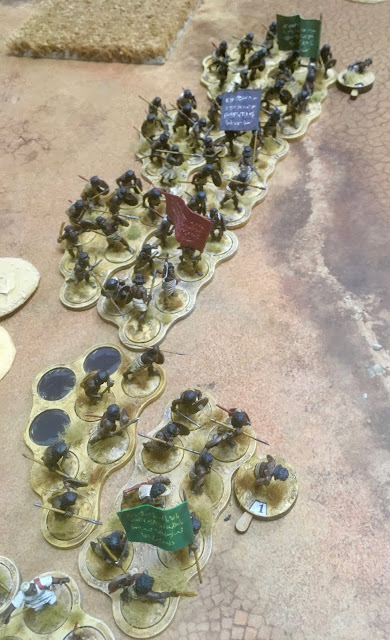 Even the Bazingers managed inflict the odd casualty at long range! 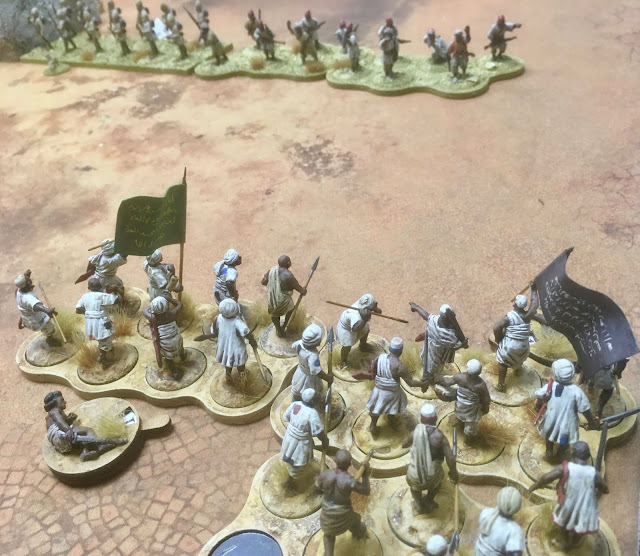 The 2/66th engaged the two Mahdist rifle units, Pinning both in turn. 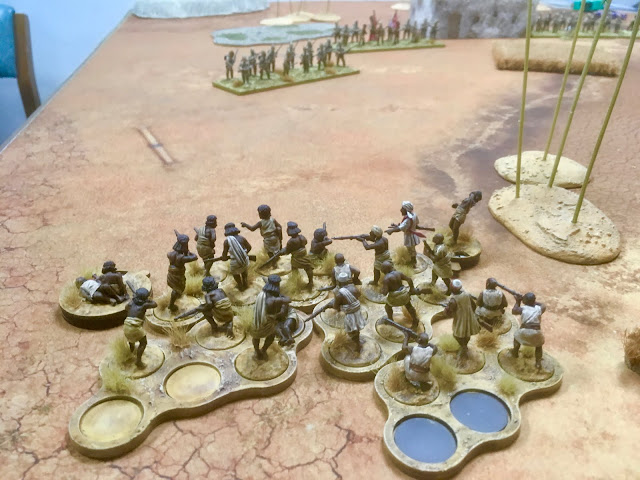 And then Routing one and inflicting more casualties on the other. 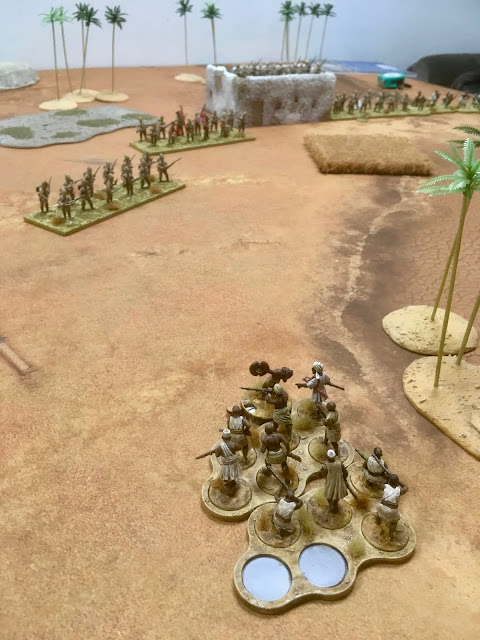 However that was a side action to the main battle on the left flank and George's stabby guys continued their relentless advance towards the objective! 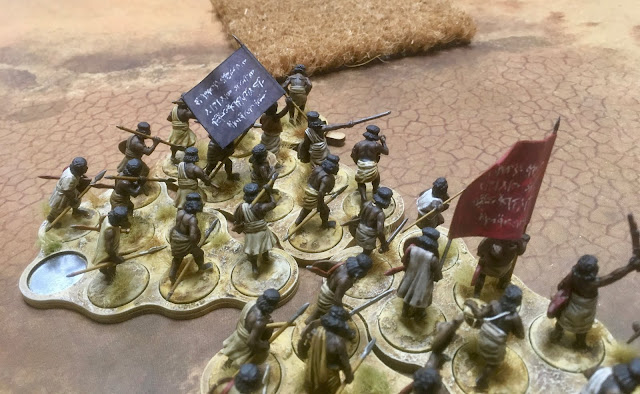 Only to be met by a withering Volley of rifle fire from the 3/66th, who rolled 9 hits out of 12 on one unit of Beja! 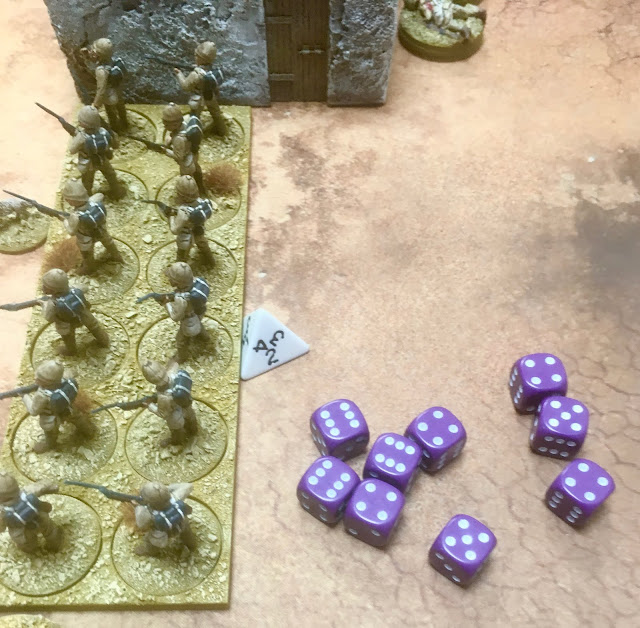 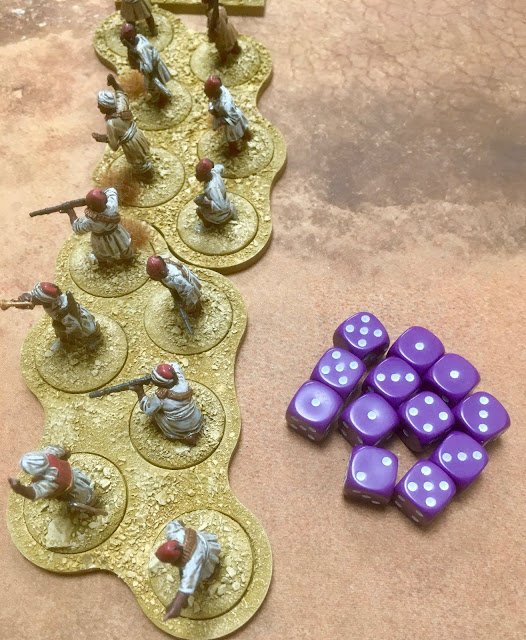 And a unit of Nile Arabs charged in on them killing 9, forcing them back and Pinning them! 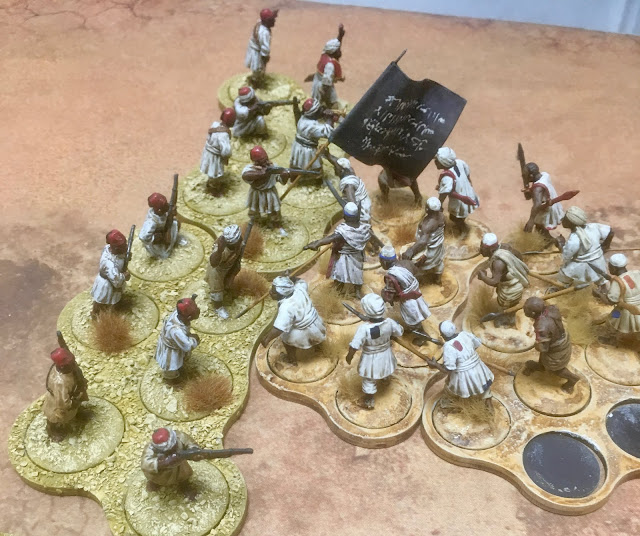 The Arabs success was fleeting as in my phase the 3/66th Volley fired again, killing eight and Pinning the rest.

Overall, despite the casualties inflicted on the Bazingers, I was feeling pretty confident at this stage with four units of Regulars still at pretty much full strength. I just needed to keep the stabby sticks away from my brave Khaki lads! 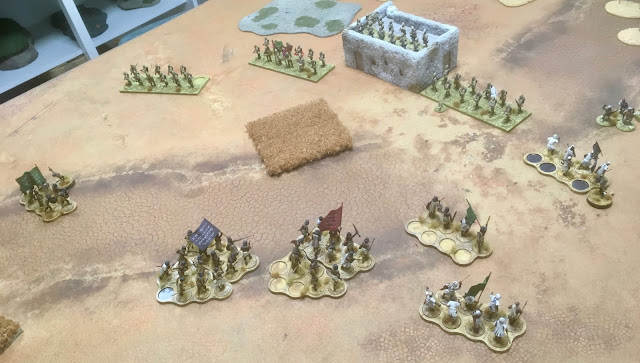 George then decided to Charge his Beja in on the 3/66th, but the Dice Gods were against him this night and his Charge ended up short, right in front of the 3/66th who were in Close Order!

However a reduced unit of eight River Arabs did manage to get stuck in... 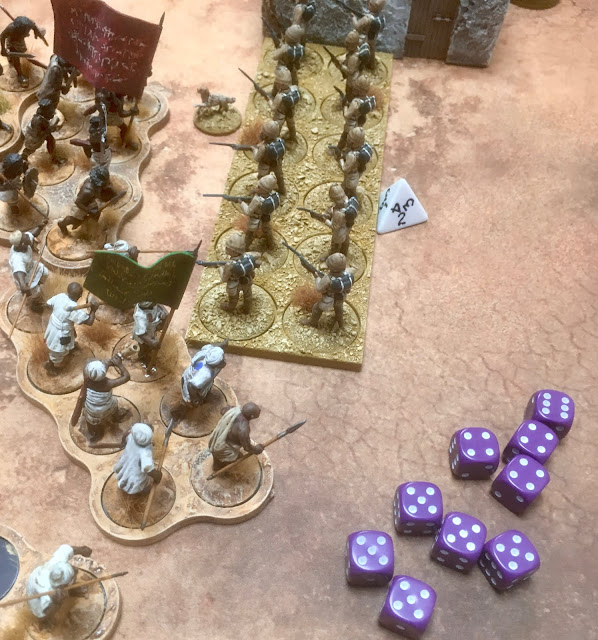 ...and died to a man as the 3/66th rolled nine hits in Close Combat, the Arabs only inflicting two casualties!

In a desperate last throw of the dice George advanced one of his Beja units forward, despite being only four strong now them were level with the 3/66th who now could not fire in Close Order. 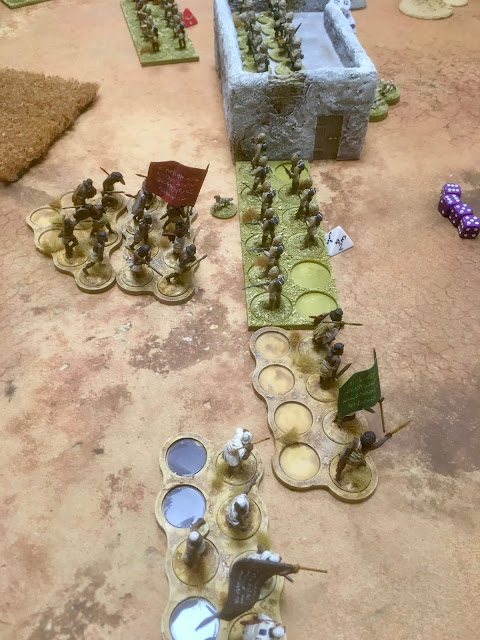 As these four were Fierce Tribal Infantry (killing on a 4+ in Close Combat) I decided to order the 3/66th to Skirmish and fall back. This meant a half move and half firing, but they did kill three of the Beja who had outflanked them.

The Red Flag Beja who fallen short in their Charge were shot at by the 92nd (Gordon Highlanders) who were defending the building and Pinned! 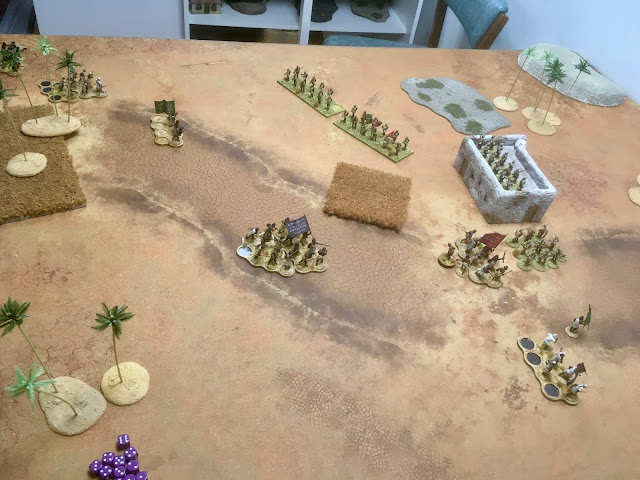 Things were not looking too good for George at this stage but he had one large unit of Beja left, but if he could get them into contact with the 3/66th he might be able to finish them off and then Pin the Highlanders.... 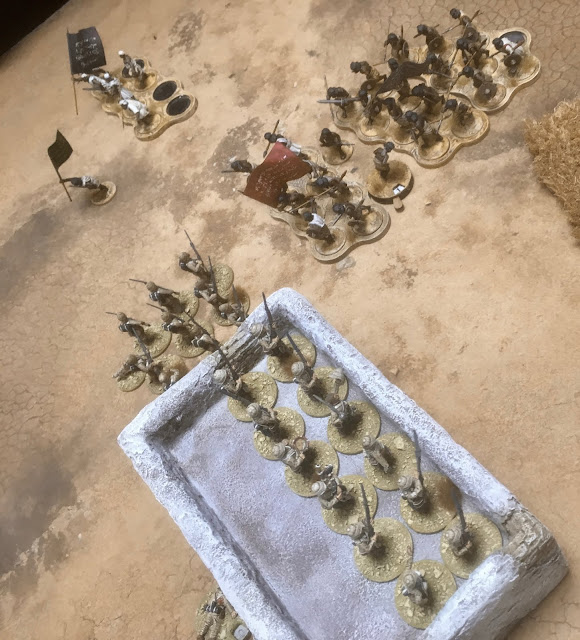 Unfortunately they advanced into a corridor of fire from the 1/66th and 92nd... 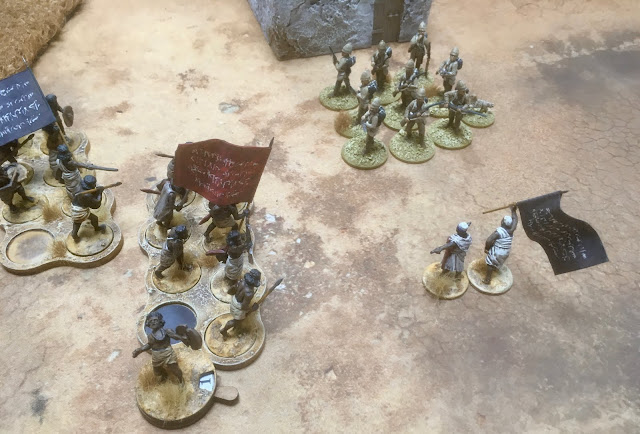 ...and in two turns of fire were wiped out.

With a handful of survivors left, the Enlightened One George decided to call it a day and surrender the battlefield. 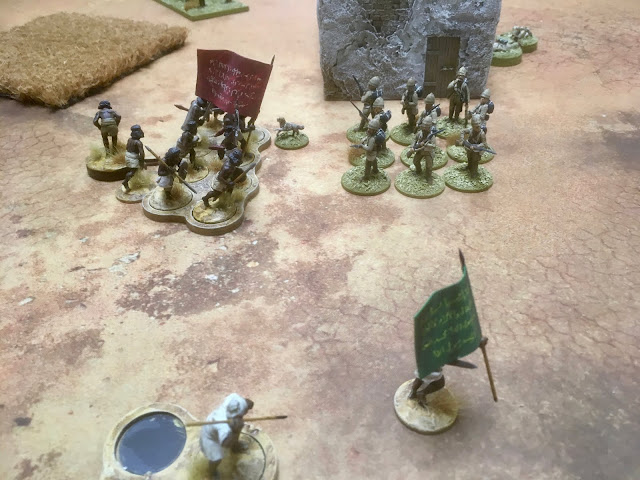 Although the game ended up being pretty one-sided, it is worth remembering on the two previous occasions we have played this scenario the Mahdists have won decisive victories.

My dice rolling tonight was much better than many previous battles and George was fated to fail a number of Rally tests at key points which if passed would have probably allowed him to overload the left flank. He also rolled Charges up short at decisive times.

All in all though another good game with a very enjoyable set of rules!
Posted by Steve at 15:20:00