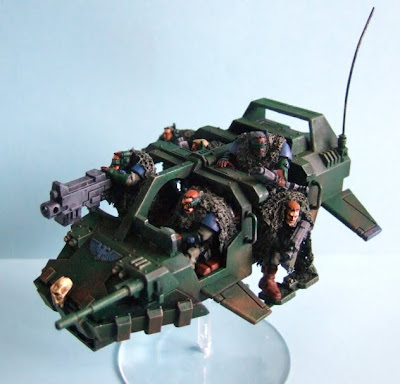 Saul's birthday today and one of his presents were these Marine Scout units and Land Speeder Storm I painted up for him (this was what I picked up at Devizes).

The Storm is a stretched version of the standard Land Speeder and is a nice, easy model to put together, though the instructions are pants and I did miss sticking on the dashboard so had to cut it in two and stick it in at a later stage. Whilst the rest of Saul's Screaming Eagle Marine vehicles (and Marines) are clean, I weathered this one with some dirt and worn metal areas and added an Ork skull trophy as I wanted impression that the Scouts are often at the sharp end where 'spit and polish' is not the order of the day. 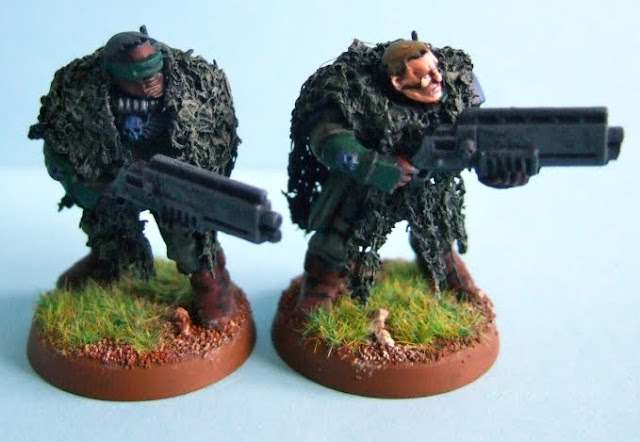 All the crew (except the driver) are pinned in and can be removed when the Scout unit deploys on foot. This was more work than I anticipated as the Speeder crew are not equipped as per the foot squad so I had to convert two to carry spare shotguns from the foot pack. As best as possible each crew member has an identical foot substitute. The only major difference is the heavy bolter Scout whose head mounted targeting display switches from one side of his head to the other upon jumping out of the vehicle!

I must confess I never really liked the Marine Scouts when first introduced into the 40K background sporting knives and bolt pistols but these figures are much more commando like. However they are still too clean looking so I added scrim style camo netting to all, some have cloaks wrapped around, others tabard-like camo. 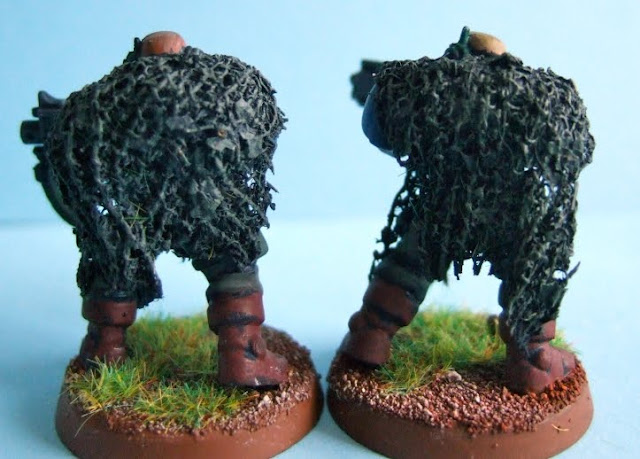 This was a positive fall out of slicing my finger open as when taking the bandage off I thought "ooh camo netting!" (like wargamers do...). It was soaked with diluted wood glue and I raided the kitchen and stole some majoram from the herb rack (I don't know what majoram is used for but the container looked old and unused and the herbs were a good size for leaves).

I also painted up the sniper unit, adding a bit of scrim to the sniper rifles (as they already had cloaks) and giving the missile trooper a scrim tabard. Whilst I liked the three firing, the fourth sniper was holding his rifle up at a funny angle whilst attaching his scope which just looked silly, so I chopped his arms around to what looks a more sensible carrying position. 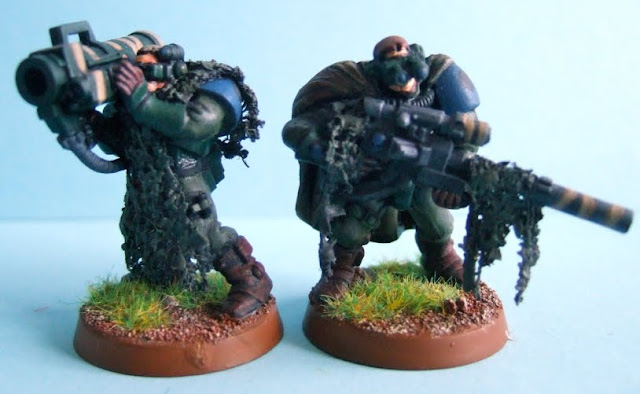